Vancouver took one shot on net in the third period. They were tied 1-1 two minutes into it and that’s the offence they mustered.

In overtime… no shots.

If you didn’t watch and you just saw they went to OT, you’re probably assuming the worst. I would too.

They lost in OT of course. That’s 0-7 now. Started the extra period killing off a bad Radim Vrbata penalty, did a good job of it, had the small advantage that teams play 4-on-4 after a penalty in OT until there’s a whistle… and skated themselves offside at the Kings’ blueline to ruin it.

The Canucks didn’t really deserve a win, but their goalie, Jacob Markstrom sure did. Edler apparently wanted him to earn it with one more heart-attack inducing save.

1. Not exactly a bounce-back performance

After being thoroughly embarrassed, outplayed, almost not even bothering showing up Monday night against the Ducks, the Canucks were supposed to have some push back against the Kings Tuesday.

In an 82-game season, those nights happen. They happen to the best teams in the league. What matters is how the team responds.

The Canucks did play better – no doubt about that.

Daniel Sedin to Sportsnet after the game: “We were disappointed with last night’s game. Tonight we played a lot better and battled for each other.”

Here’s the possession chart from hockeystats.ca. 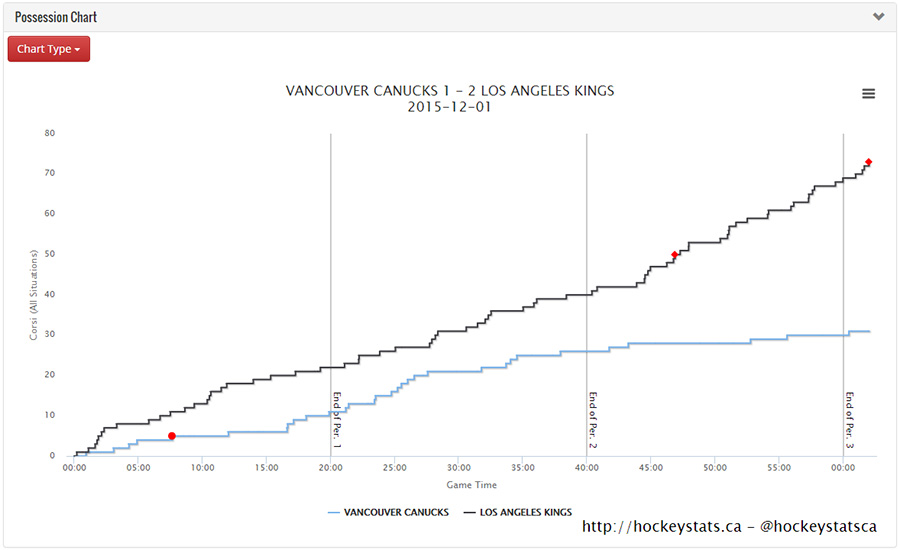 While Vancouver was outshot 22-15 through two, it was the third period where they were really disappointing. Playing back-to-back nights, that could’ve been expected.

Playing with these lines, it’s actually impressive they did as well as they did.

And yeah, Tanev was nowhere to be seen on D.

With a lineup like that you’d think Canucks fans would be a little happier with an OT loss to the Kings.

At least this guy gets it.

@omarcanuck they are lucky they got 16 shots with those line combinations ????

Wondering the ice time? Prust was fourth amongst wingers with 16 minutes – just behind Hansen, Daniel and Vrbata, and ahead of Burrows.

Baertschi played under nine minutes and Pedan less than four.

Hopefully Shinkaruk or Grenier is on the next flight from Utica.

Daniel after the game: “I think we ran out of juice in the third and (Markstrom) stood tall for us.”

Stood tall is an understatement. “Earned us a point” would be a better explanation. “Deserves very expensive Christmas presents from all of us for that one” would be even better.

Markstrom made so many fans-lose-their-lunch saves that there’s no way I could include them all. Here are a few.

Based on his and Miller’s last games, you play Markstrom next.

3. A letter to Dorsett and Prust

A couple of my favourite lines:

1. After a picture of Getzlaf injuring Virtanen

How can anyone let anyone do this to a rookie without, for lack of a better word, retribution? What one of you should have done is let Getzlaf know, you saw it, don’t do it again, with some physical play

2. Under a picture showing Perry kneeling on Miller’s arm

He is our goaltender. He’s our starting goaltender. Why is this allowed to happen? I understand Hamhuis should have been the guy in the first place to not even allow it to happen, but I would gladly have one of you guys take a goaltender interference penalty just to get the message across. Ryan Miller has been mowed down like a golf course green and it has to stop. Most fans expect you, Brandon and Derek, to take it upon yourselves to make sure it’s not OK to run down our goalies.

But the best was the conclusion, despite the Eddie Lack slag.

Brandon, you have sweet twitter game. But if we wanted twitter game, we would have kept Eddie Lack. This needs to be addressed by the both of you. That means to make sure guys like Getzlaf, Kesler and Perry don’t ever do that to our boys again. We all have jobs to do, your team and your fans need you blokes to do yours.

Great letter, no? Only thing that remained to be seen was how they’d respond.

First, asked about the safe working environment he and Dorsett are supposed to be providing for Vancouver’s young players earlier Tuesday, Prust told the media the young guys can handle themselves.

It was a stunning comment from him, when you consider Jim Benning has said the fourth line’s job is to protect the kids on more than one occasion.

Makes you wonder if he thought he was moved to the second line and Dorsett to the third because of their sick offensive skills, rather than to provide a bodyguard for each line.

What did Twitter expect from the guys who are supposed to be Vancouver’s Bash Brothers?

@omarcanuck A whole lot of nothing

Well they managed eight hits between them, which was better than their zero on Monday.

@omarcanuck Lots of hugs and lots of time in their own zone.

Funny you should say that. Here’s Prust at the end of the second period. 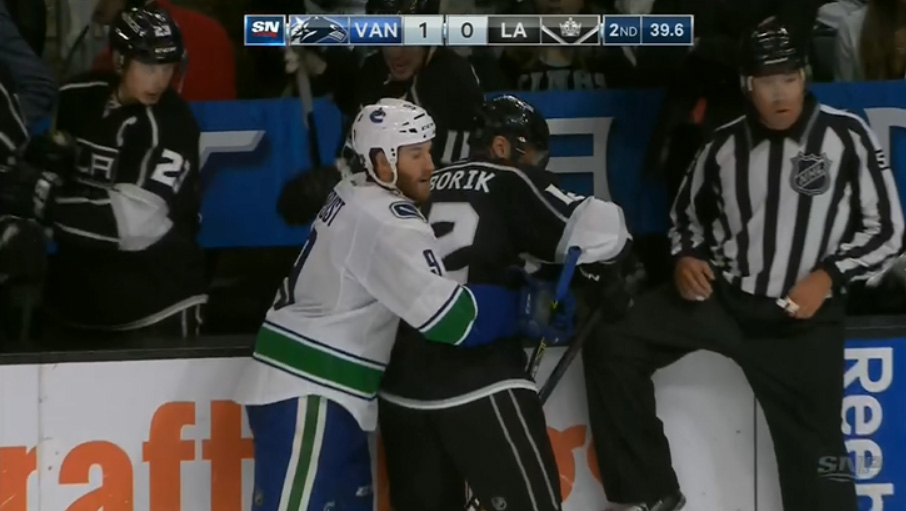 This response wins. After that Prust hug, it’s fitting.

(Bash Brothers is a Mighty Ducks reference, in case you didn’t get it)

5. Hard to defend Bart and Baert

Turns out there was a reason Sven Baertschi didn’t get in Brian Burke’s good books in Calgary. I’ve written about this many times before. I’ve also had some pretty heated exchanges with some guys who love stats more than players who help an NHL team win.

Baertschi has great possession numbers, they argued. His numbers are the best on the team, they said. Give him power play time.

Problem is he’s no good at forechecking. When he goes in for a battle, there’s about a 0.1 percent chance he’ll win it. That’s being generous.

Here he is getting ragdolled off a puck he actually had possession of.

And here he is with the puck at his own blueline in the third perdiod – a critical point in the game.

He’s not going to last long at this rate.

Compared to Sven, Bartkowski’s been great. He skates well, he can carry the puck really well, and he does get it out of trouble a lot of the time.

Something happens to him when he enters the other team’s end of the ice, though. He just doesn’t know what to do.

That happened more than once against the Kings. He’s a black hole in the offensive end.

6. The plan for Virtanen

Should the Canucks send Virtanen to the World Juniors or not? Team Canada needs to know in a couple of weeks.

Elliotte Friedman had a take in 30 thoughts:

Jake Virtanen left Monday’s game in Anaheim early, but if his injury is not serious, there is a model for the Canucks to follow.

At this time last season, Ottawa’s Curtis Lazar was playing more than Virtanen is now. But the Senators saw the value in the World Junior event. There was discussion beforehand about role and responsibility. Ottawa was assured Lazar would be a significant part of the squad and, depending on who you talk to, knew he’d be captain.

The move benefitted everyone — the player, the organization and Team Canada. If I’m Jim Benning, I’m having a similar conversation this time around.

Makes sense – let Virtanen go. He’d lead the team on and off the ice and develop as a leader, while back in Vancouver Hunter Shinkaruk, Alex Grenier or Nick Jensen get a chance to play with the Canucks. Not a big step down for Vancouver (I’d say it’s an improvement with either Shinkaruk or Grenier), and it’s a step up for Virtanen.

And while they’re at it, why not send McCann too?

Note: thanks to Ryan Biech and his quick fingers for producing the gifs in this post.