The Canucks touched greatness less than a week ago.

Last Tuesday, after Vancouver lost to San Jose – their ninth loss in a row – they were tied with Edmonton and Toronto for last place in the NHL.

They were so close to having that 20% chance at the first overall draft pick that comes with the coveted last-place spot.

Then they went on a three-game winning streak – their longest stretch of success in this season from hell.

Salvaging a horrible season? No matter how many players say it, the fans aren’t buying it.

Only one positive can come out of this season, and that’s elite talent in the draft. Oh, they still do have a chance at Auston Matthews, but the odds went way down with this win.

There is some debate with the Canucks in an intense battle for one of the top spots in the NHL (at the draft).

Willie had some thoughts earlier Monday.

WD on tank nation (1): A good draft pick, you always want. But more important than one player is the culture of your team.

WD on tank nation (2): And if you ever lose that culture, you're set back for years and one player won't help you get out of it

Funny thing is Willie’s not the only one who thinks this way. The Sedins do, Jim Benning does, many fans do, and a bunch of media members say this often as well (especially the ones employed by the team – funny how that works).

Here’s a question for anyone who does: would you rather have Connor McDavid in your lineup and no winning culture, or no McDavid, but more accountability?

As soon as I wrote that I realized I’m asking if you’d rather be in the Oilers’ shoes or the Canucks shoes right now?

The answer seems obvious to me – you take the talent and teach it to win, because a talent-less bunch can only go so far, regardless how hard they try.

Not that the Canucks are talentless… they’re not. They have aging talent in the Sedins, and some young talent in Hutton, Virtanen, McCann.

The gap is “elite” talent. Sure, it might be filled by McCann, Virtanen, Hutton, and more likely Boeser and Demko… but who knows? Cody Hodgson was supposed to turn into elite talent too, as was Nail Yakupov… and those didn’t exactly turn out well.

Point is you need to take as many shots as you can, and hope you hit on a some.

After Miller won first star of the game – and he fully deserved it, holding off the Kings’ 20-6 shot differential in the third – he said wins like this will set the foundation for the future. He told the Rogers Arena crowd he feels bad for the fans that Vancouver missed the playoffs, but the team still has a job to do.

Think fans would love that dedication from their goalie? Let’s see…

Miller deserves to be punched in the face by Lucic. Set foundation for the future. Gtfo https://t.co/x4CDtiYxg6

Foundation of being crap for the next decade https://t.co/2Ugx9pPuSF

@omarcanuck fans don't care about one round of playoffs. Fans care about winning long term and having s chance to win the cup.

@omarcanuck Miller is gone in a year, he could give a shit

3. Responses to Kuz are better

I haven’t read Kuz’s article – didn’t have the time yet, but I did see his tweet and I had a feeling it wouldn’t be received well. 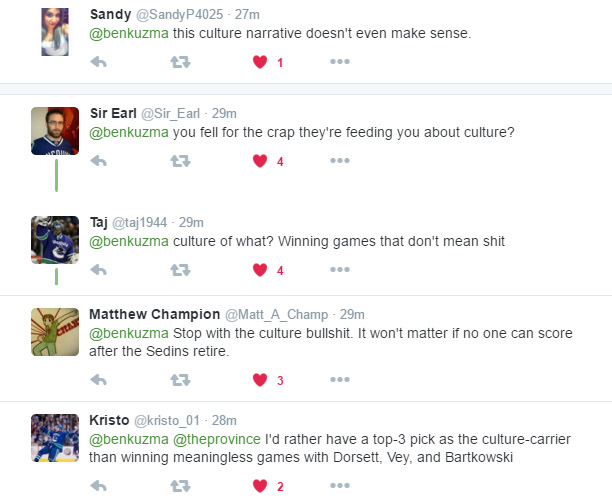 "What does it mean to win 3 straight against Stanley Cup contenders?": Henrik, "Nothing. Would have been nice to do it earlier." #Canucks

Here’s someone who’s not thinking clearly:

Even if the Canucks luck out and win the lottery it doesn't excuse blowing a chance for a better finishing position.

No one said the Canucks can’t win the draft lottery. Fact is, their chances of doing it went from 20% to 7.5% in the span of six days.

Before Monday’s game, Vancouver had the second lowest power play goals-total in the league.

Asked why the team’s second-best goal scorer – Hansen – hasn’t played on that sad power play, Willie has repeatedly said Hansen scores his goals off the rush, he’s not suited to the power play.

Fans disagreed – Hansen has shown a remarkable ability to adapt to whatever situation he’s put in over his career be it fourth-line grinder, top-line winger, penalty killer, or quote machine.

Monday, he finally made it onto the power play, and guess what?

Sedin to Hansen – #Canucks tie the game at 2 pic.twitter.com/3lgejfm4sj

Note that Hansen didn’t make the power play by any stroke of genius from the coaches – he was there because of injuries, and that’s about it.

Willie on Hansen’s PP goal after the game: “He’s a shooter and he can score backdoor like that.”

Now imagine he’d been there all year long… back when games mattered… could he have made a difference in all those one-goal losses from October to December?

OK, whatever happens in the off-season, you can still look forward to this guy playing in Vancouver next year.

Who knows – random ol’ Willie might even try this.

@omarcanuck how about Tryamkin on the first unit PP? I hear he has a cannon pic.twitter.com/KONH6xvNpx