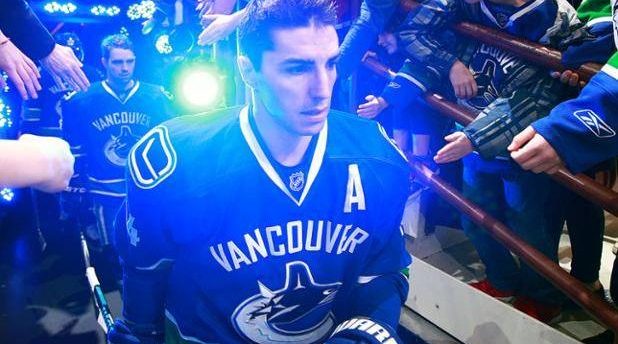 Alex Burrows’ time with the Vancouver Canucks may not be done yet.

According to a report from TSN 1040’s Matt Sekeres, the Canucks are planning to bring back Burrows for another season, while electing to buy out Chris Higgins.

My understanding is #Canucks are bringing Alex Burrows back for next season but plan to buy out Chris Higgins this week. #CanucksOn1040

Both players have one year left on their contracts before becoming unrestricted free agents.

The final year of Burrows’ deal has a cap hit of $4.5 million, but pays him just $3 million in real dollars. His role with the Canucks isn’t what it once was, as evidenced by his diminished ice time disappointing point output. Burrows scored 22 points (9-13-22), his lowest full-season point total since 2006-07.

The 35-year-old is nearing the end of his career, and appeared resigned to the fact that he was at the end of his time with the Canucks at season’s end. But moving Burrows could be difficult for the Canucks, who would likely have to retain salary to complete a deal.

Higgins, on the other hand, appears headed for a buyout of the final year of his $2.5 million contract. The 33-year-old was sent to the AHL midway through last season, before being recalled late in the campaign. He scored just 4 points (3-1-4) in 33 NHL games.

*Update: Higgins has been put on waivers

Higgins should get a chance to continue his NHL career, likely as a fourth line role player.

In other news, it appears, as expected, Dan Hamhuis’ days as a Canuck are numbered. He’ll become a free agent on July 1 unless he is signed to a new contract.

Expect the Canucks to make a number of moves in advance of the free agency period opening at the end of the week.