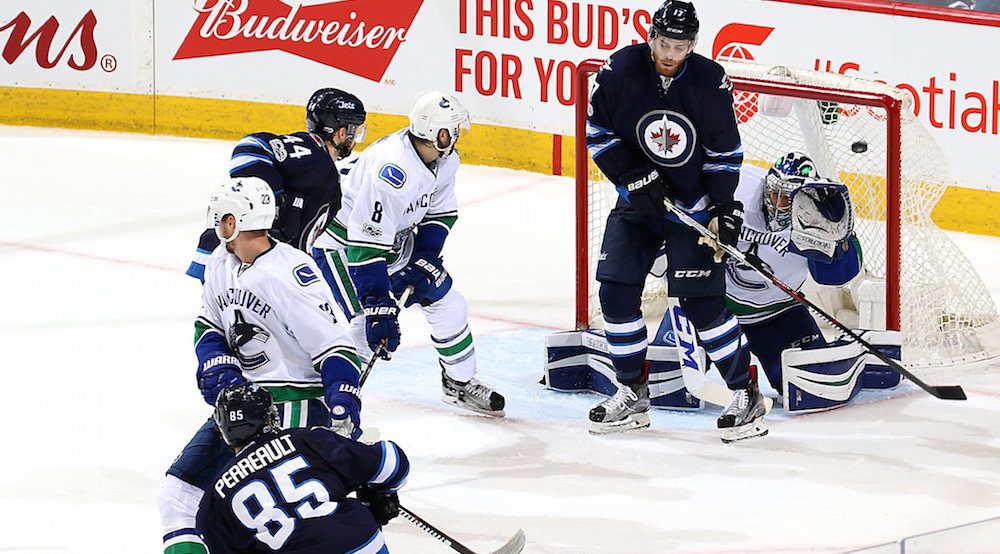 Tank Nation’s not about to complain about the result, that’s for sure.

Vancouver took on another non-playoff team in Winnipeg on Sunday and the Canucks made it quite clear they need high quality draft picks a lot more than their opponents.

The final score was 2-1 Jets, but for yet another time this season it was close more because of Miller’s efforts than anything else.

What fans will complain complain about: “play the kids” not sinking in.

These are the Canucks forwards who saw ice time with two minutes left and Vancouver down a goal: the Sedins, Sutter, Chaput, and Horvat.

Yes, after three seasons of being Vancouver’s most dynamic player, Horvat’s forced his way into Willie’s consciousness. The rest? Not so much.

Yet somehow Chaput has.

As Jeff Paterson pointed out after the game, Baertschi saw only 24 seconds of ice time in the final five minutes with the Canucks down a goal. Behind only Horvat, he’s been the Canucks second best forward all season.

Goldobin got one shift in final 6:33.

Again, Tank Nation’s not going to complain. Questioning Willie – a guy who’s still trying to win every game, especially in the dying minutes? They’ll do that.

@omarcanuck I actually think the kids give them a better chance to win at this point?

If Baertschi’s a kid, he’s definitely earned the right to play over Sutter in those final minutes, and even with his defensive issues, Boucher’s shot makes him more of an offensive weapon than Daniel Sedin.

Oh well. Fans got the result they wanted. Another happy thought: Vancouver only has seven games left.

Look, I know you came here for rookie highlights. Boeser played eight seconds shy of 18 minutes, but really, there wasn’t much to talk about.

So instead of gifs, let’s look at pictures of the Canucks player with the dreamiest eyes since Taylor Pyatt. 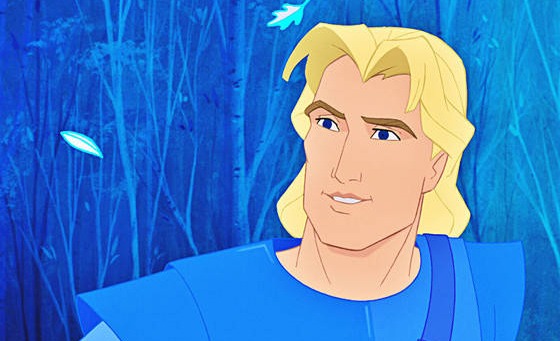 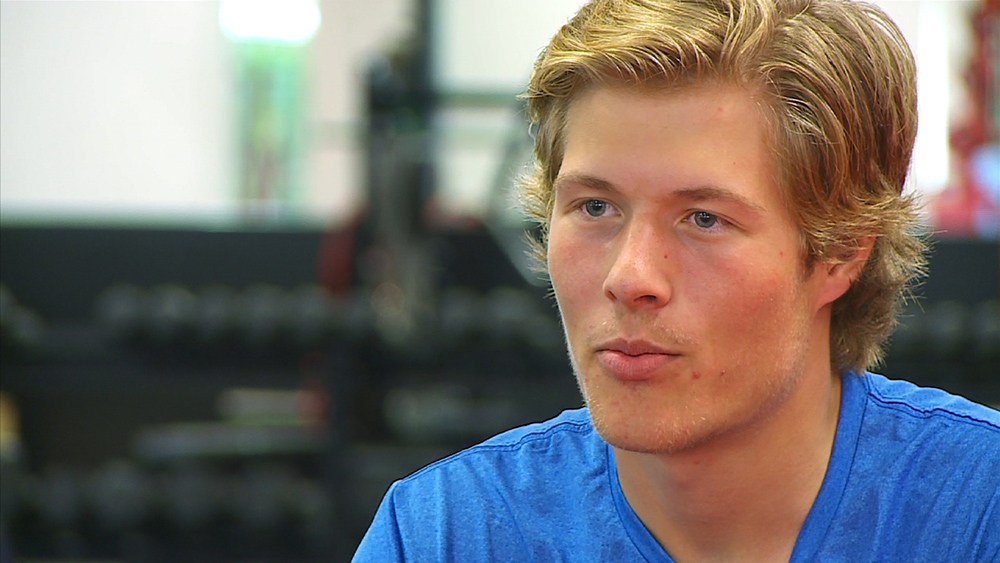 Hard to tell the difference, right?

(The likeness was discovered by @loveyourcake)

Boeser did somehow manage to replace Sutter on the first unit power play, and he looked pretty good there. Given Willie’s love for Sutter all season, you have to wonder if that was even his call to make.

Anyway, Boeser didn’t do much, but he’s still doing what Canucks management and owners signed him for.

Brock celebrating his first NHL goal by going to Tosche Station to pick up some power converters. pic.twitter.com/lUU6d9yUmG

Goldobin, meanwhile, has clearly not earned Willie’s trust yet as he played just 10:01 in the game.

While many fans will be upset by that, truth is Goldy doesn’t make it hard to find the plays that make Willie stick him on the bench.

Here he is with the high risk pass leading to a turnover just inside the opponent’s blue line.

And here, he does well to backcheck and intercept a pass, but promptly negates all that work with a soft play resulting in another turnover.

Now don’t get me wrong – I’m not saying I agree with the way he’s being treated. This tweet sums up the way I feel about encouraging young players perfectly.

@omarcanuck wonder if Willies distrust in him is wearing on him and he’s playing scared. What comes first, the confidence? or the trust?

Tough question, but it’s one the Jedi trainer Willie is supposed to have the answer to.

Given the schedule, you couldn’t have expected much more.

Vancouver played at 11 a.m. PST in Minnesota on Saturday, then 5 p.m. PST in Winnipeg Sunday.

Boeser went to double overtime with North Dakota Friday evening before playing both Saturday and Sunday, so it’s a miracle he even got to 17:52 without keeling over.

Corsica.hockey’s expected goals model had the score at 3.6-2 for Winnipeg, meaning given shot locations and number of shots taken, Winnipeg certainly deserved the win.

How tired were they?

Check out the result of Edler taking the pass at the blue line here.

And a couple minutes later, what happened when he got his pocket picked in front of the net here.

He did score a goal late in the first, but it wasn’t Edler’s best game.

This from the fourth line was Vancouver’s best scoring in the first.

When you’re best scoring chance comes from the fourth line, and the shot is from the guy who usually plays defence (Biega), things aren’t going well.

Another sign things weren’t going well – Stecher’s injury at the end of the first period.

He was done for the game and possibly longer after that hit.

Now, we haven’t done this in a while, but here’s Sbisa reminding us why Vegas grabbing him in the expansion draft could be the best thing to happen to the team this summer.

That’s him bodychecking Sutter and allowing what should’ve been another Jets goal. They hit the post, btw.

With the assist tonight, Horvat gets to 50 points. 55 would mean back to back 15 point improvements.

And this pretty much sums up most of Vancouver’s response to losing these days.

oh no the canucks lost im so sad pic.twitter.com/HbHp9s2XEr

Here’s something I just discovered that some of you probably already knew: there are Lego figurines for all 30 NHL teams (I discovered this thanks to a tweet from @Sir_Earl).

Here’s who they chose from the Canucks. 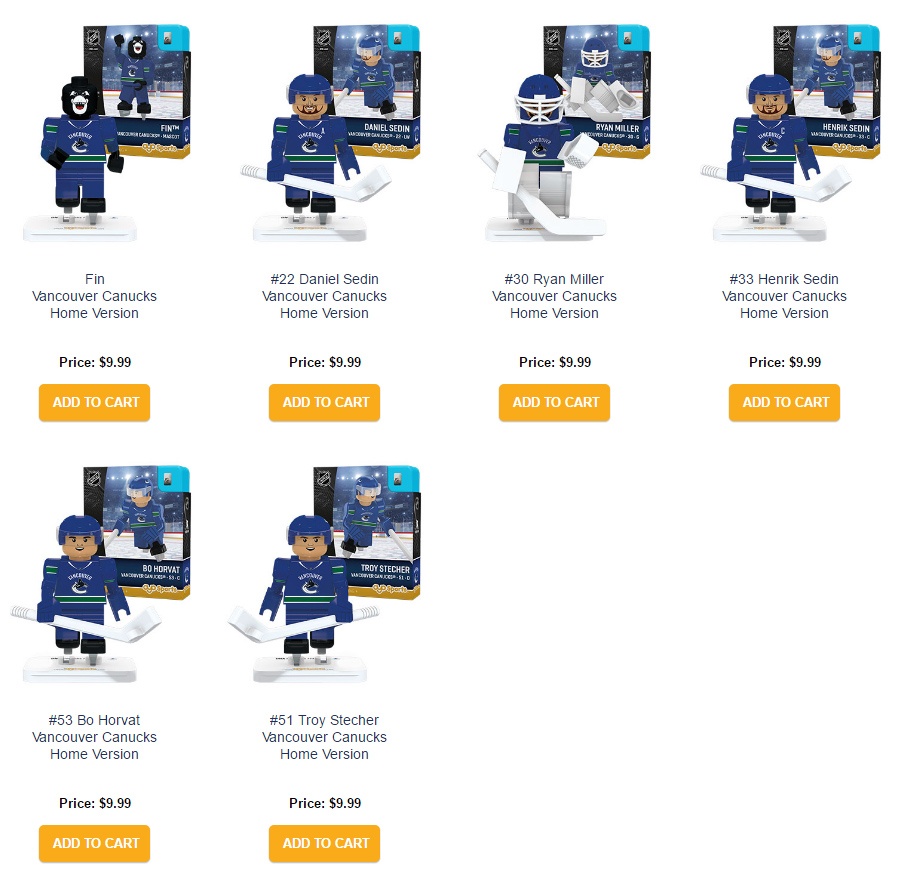 Stecher and Horvat? Understandable – even though the two figurines are as identical to each other as the twins’ are.

Miller? Don’t know if he’s that popular, but sure.

Fin? Makes sense to include him since these are probably meant for kids. Also – he’s probably not getting traded or retiring any time soon.

Sure, they’d have to completely reconfigure the lego figurine mold for the first time in history to allow for a guy who’s twice as tall, but that’s the one you need. If organic sales weren’t through the roof (and I think they would be), I’m quite sure Wyatt’s marketing of Lego Tryamkin would make it all worthwhile.

After “the Boeser Game” Saturday (thought of calling it the Minnesota game, but let’s be honest, no one cares who they played), KB Radio asked listeners what the highlight of the Canucks season has been.

The answers, as the kids say, were lit.

That thread might be the highlight of the season for me.