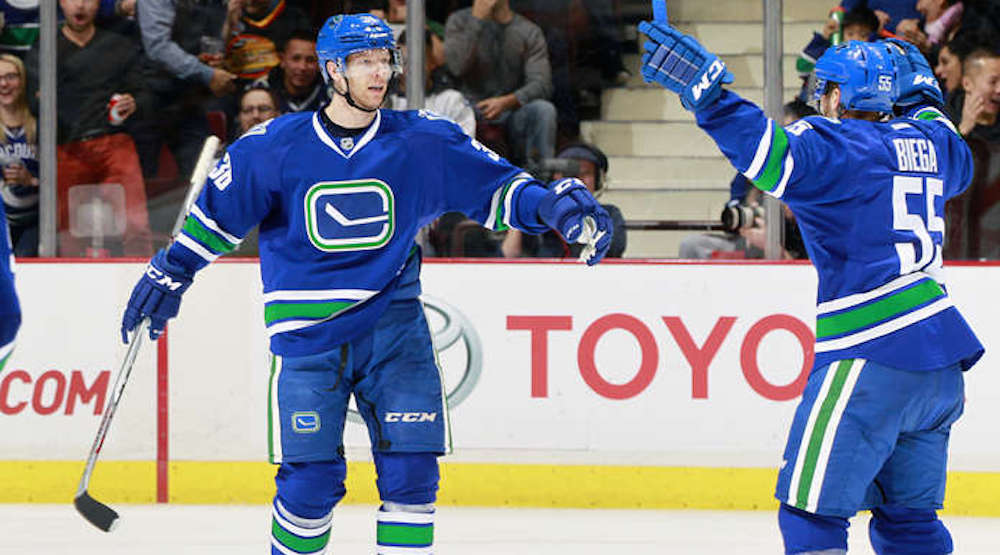 One team had to win.

The Jets were 21st in the NHL coming into the game while the Canucks were 28th.

Vancouver won 4-1, which looks like domination, but it wasn’t. They took over in the second, scored early in the third, secured the lead and held on until the end.

And with the way they’ve dealt with leads recently, holding onto this one shouldn’t be taken for granted.

You kind of feel for Winnipeg, because looking up and down their lineup, they have skill and size, and they have no reason to be this bad.

The Canucks on the other hand – aside from two guys in the head office – no one pegged them for the playoffs this season, and even those two now claim they only ever “wanted to be in the mix”.

With two goals from the Sedin line, Tuesday’s win was the type Vancouver should’ve had more of this season – wins on the back of timely top-line goals.

Instead of loading up a scoring line, the Canucks had Sutter with the Sedins while Hansen was injured. They went for three balanced lines, over a single one that could score regularly.

Burrows or Eriksson with the Sedins would’ve made a difference.

But no one ever said life is all about goals, right?

Hansen knows where to go when playing with the Sedins. He finds open spots, fits in on the cycle, wins forecheck battles, and does everything Eriksson and Sutter failed to do with them.

Exhibit A – Hansen scores his first of the night:

Exhibit B – Hansen scores his second:

Only one question remaining.

@TheStanchion how is Hansen’s goal song not MmmBop? It’s really the only logical option.

His song is the very well known Booyah by Showtek, btw.

Yeah… I’m thinking DJ Jay Swing needs to have a “mix up” and put on Mmmbop next time he scores.

2. The Sedins’ other linemate

This is the guy they had playing with the Sedins while Hansen was out.

It takes a magician to turn a 2-on-1 chance into a completely unthreatening situation, no?

In case you’re wondering, yes, the “foundational player” did lead Canucks forwards in ice time once again at 17:41. Henrik Sedin played over a minute less at 16:29.

“Quite honestly, we haven’t seen that. We got on the wrong side of the injuries with our defence. Loui (Eriksson) got off to a slow start offensively and Sven (Baertschi) has struggled to score. Jannik (Hansen) missed a bunch of games. We knew we were riding that fine line. We’ll see how things play out here.”

Sure, he has a point with the defensive injuries, but anyone who knows anything about the Canucks knew those were coming. Quick snapshot of how those injuries affect a team:

That’s Biega getting turnstyled on a Jets goal that should’ve never happened.

The more surprising part of Linden’s take is his blaming Eriksson and Baertschi. Both were identified by this management group as guys who’d make a difference.

If they haven’t made the impact the team hoped, whose fault is that?

Coaching? (In Eriksson’s case, his deployment has been a hindrance)

Whoever thought they’d carry the load? (Baertschi’s fifth on the team in scoring, can you really hope for more?)

Sure, but that excuse isn’t going to get you far in this city.

Baertschi, by the way, has been pretty good lately. Here’s his goal against the Jets.

That’s one of the three guys you’re blaming?

4. Virtanen’s getting in shape (again)

Jake Virtanen’s been in Utica for over a month now, and Comets’ coach Travis Green spoke to TSN 1040 on Monday on Virtananen’s progress.

“Jake’s overall game is getting a lot better. His confidence seems to be rising. It’s not just in games, it’s in practice …

We had a real hard practice today, pushed our guys – I wasn’t happy with the weekend. Two or three weeks ago Jake probably would’ve had a lot harder time getting through practice as far as his conditioning.

The little details we stress in practice, finishing out a drill, going to the net hard, stopping at the net. He’s making a real conscious effort to really push himself. As far as his game goes, I see it translating to the games. He had a streak where he scored four games in a row, but that’s not the end all, be all for me.

We want to develop a guy who can play in different situations, is hard to play against, is going to be a power forward eventually. There’s little nuances in the game you have to learn. We grind on him daily about his habits, about details, and I see improvements in those areas.”

If you’re like everyone else in Canucks nation, the part of the quote that pops out is three weeks ago Virtanen’s conditioning wasn’t where the Comets wanted it.

Question is, was his conditioning where the Canucks wanted it? Don’t forget Virtanen came back from the World Juniors last year at 208 lbs and he played his best hockey down the stretch.

Yet to start this season…

Virtanen says he’s bigger AND faster, goal this summer was to get stronger. Tells me also he’s worked heavily on his shot. #Canucks

Iain MacIntyre – who has a good handle on what Canucks management is thinking – spoke about Virtanen’s weight on TSN 1040 on September 8:

“It’s up to him, and so much of it is about strength and body fat, but by all accounts, he’s worked his tail off this summer.

Nothing happens now with NHL teams, especially with their younger players, that the team isn’t aware of and doesn’t have a hand in, so if he’s gained 10 lbs, it’s with the team’s blessing and they’ve overseen what he’s done this summer.”

To me, all this means Virtanen put on weight under the team’s guidance, didn’t play as well as they wanted him to, and is now being told to get rid of it.

So maybe he’s not the one who should be blamed for all this.

Green has three things the Canucks could use in a coach:

OK, the last one’s dumb, but a list with two points looked too short.

“He looks good. He’s gone through a couple of practices with us, two of them being harder than a regular day-before-a-game practice, and he’s looked sharp.

I thought in games he’s looked probably better than I thought he would. His conditioning is good, his hands and skill are at an elite level for this league. I made the comment last week that he reminded me a bit of Baertschi … we haven’t had a player be able to do some of the things both those guys can do at this level for a while – we’ve only had a couple of them here over the four years.

Henrik Tommernes, drafted by Vancouver in 2011, is doing great things in the Swedish Elite League.

Vancouver may want to try to get dman Tommernes back over next season if they still own his rights. Tearing up the Swedish league.

But if he does make it to the NHL, it won’t be for the Canucks.

The #Canucks do not have his rights as they mutually terminated the contract in 2015. https://t.co/7OzK4Y6zSO

This may come back to haunt the Canucks. Why?

Just to add – when Tommernes was taken in 7th round in 2011 – pGPS showed that 71.4% of comparable players went onto being NHL regulars.

Canucks Army would’ve kept him. The eye test – not so much apparently.

First, a sick save by Markstrom on Laine:

Note: Thanks to Ryan Biech for his help with the gifs in this post