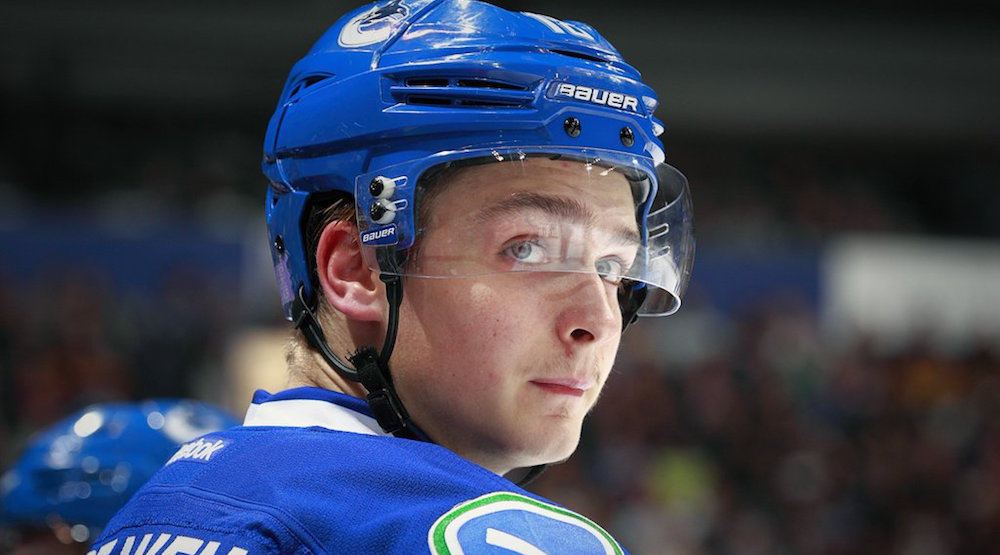 This has not been the start to the season that Jake Virtanen must have envisioned.

Through 17 games, Virtanen has played for the Canucks just 10 times, and has no goals and one assist to show for it. He has done that with just 10:09 of average ice time, which is below the 11:34 he averaged last season as a rookie.

Now, after a two-game stint with Utica, Virtanen is back with the big club but will be a healthy scratch on Tuesday against the New York Rangers.

It has left a lot of fans scratching their heads.

Virtanen has not had a good start to the season in Vancouver. There have been many theories why: poor conditioning, a secret injury, not being put in positions to succeed… You name it.

A scoring slump is one thing, but if you were confused as to where his thunderous bodychecks have gone like I was, it turns out there’s a reason for that.

“Last year I was being physical, but at the same time I look back – we do video a lot – and I felt like I was out of position a lot of the time because I was just trying to go out and destroy guys,” Virtanen told the media on Monday. That sounds like a player that has been talked to about his positioning as opposed to a player dealing with an injury or indifference.

Whatever it is, conventional wisdom would suggest that playing hockey games, as opposed to watching them, is the way to get better.

Now don’t get me wrong, the job of the coach is not to continually play a young player no matter what. Discipline is important and the only hammer a coach has is limiting ice time. But if Virtanen’s indifferent play is his own doing, wouldn’t an AHL demotion send a pretty clear message?

Here’s a video I put together of all (or most) of Jake Virtanen’s shots (on net or otherwise) in Utica last weekend.https://t.co/mFgRkditDq

The highlight clip above is encouraging. Virtanen had no points and six shots on goal in two games with Utica over the weekend, but played well by all reports in his second game, a 3-2 overtime win over the Hartford Wolf Pack.

Virtanen had a number of chances and probably deserved a better stat-line than the 0-0-0 he ended up with.

“I just wanted to go down there, help the team win and bring my confidence back up,” Virtanen said. “I wasn’t playing much (in Vancouver), but it’s got to be something I have to battle with.”

Now Virtanen is back, but he’s going to sit yet again, as Willie Desjardins keeps the same lineup that won on Sunday for Tuesday night’s game against the New York Rangers. That’s understandable until you consider that Derek Dorsett is playing on the team’s second line and the fourth line currently has Jack Skille and Michael Chaput on it.

And besides, if Virtanen wasn’t going to play, wouldn’t it make sense to keep him in Utica, feeling good about his game?

When asked why the Canucks would call up Virtanen if they weren’t going to play him, Desjardins referenced him not having his “stuff” on the road. That’s a peculiar answer to have in 2016, and something that causes the mind to wonder if there’s another reason at play.

Are the Canucks concerned with public perception of having the sixth overall pick from 2014 in the AHL for an extended period, as Jim Benning seemed to suggest last week?

I would suggest that sitting him in the NHL looks far worse.

The Canucks want Virtanen to earn his NHL ice time, and that’s fair. But if the organization insists on limiting his ice time, keeping Jake here isn’t good for anybody.