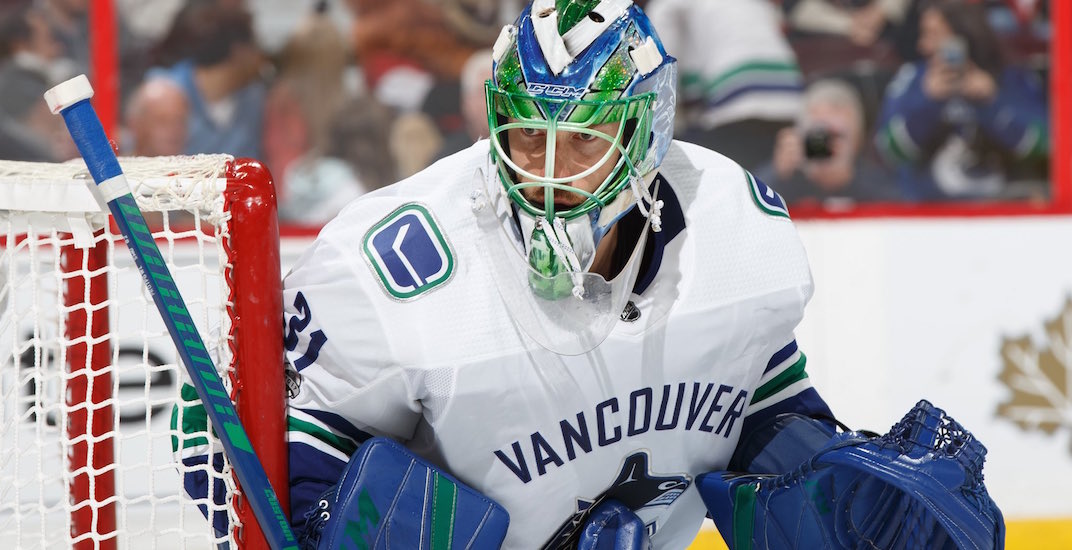 Since Sunday nearly everyone in Vancouver’s been yelling give Anders Nilsson a run as he’s been better than Jacob Markstrom so far. To be fair, most were not saying the newer Canuck should be the starter, just that the team should give him a chance to show what he’s got.

Now, while you shouldn’t blame Tuesday’s 5-2 loss on Nilsson, the fact he allowed five goals, one of them a shorty won’t help his cause. But you can see for yourself.

Second goal: DeHaan’s shot was deflected by a Canuck.

Third goal: a great passing play finished off by a top-corner Eberle shot.

Fourth goal: this was all luck as the puck bounced off Baertschi’s skate right onto Lee’s stick.

I’m not giffing the fifth goal but neither Pouliot nor Virtanen played strong D on Lee or Tavares, and Nilsson was hung out to dry on the garbage-time goal.

Look, the Canucks were outshot 31-20, and they were out-skated and out-played most of the game. This shot of Boeser before the second period, with them trailing 3-1, told you everything you needed to know about Vancouver’s effort in this one.

If it were me making the call, I’d give Nilsson another shot, but against Nashville in game six of the six-game road trip? Not sure anyone wants that one.

This shot of Barclay’s Centre during the anthems paints a bleak picture about how well hockey’s selling there.

Pretty crazy you can see Tavares, Eberle, Barzal and a bunch of other exciting young players for $10. Crazy and silly, when you realize Quebec City would do anything to have a hockey team, including buy all the tickets.

2. Give the fans what they want – #FreeGoldy

Canucks fans wanted one thing on Tuesday. It wasn’t something crazy like Jordan Subban playing an NHL game, it was a much more reasonable request – think Boeser playing the first two games of the season, or he and Horvat playing on the first unit power play.

And like those calls from the fans earlier this season, this made sense.

They wanted a chance to see one of the team’s best young prospects who’s been killing it in the AHL play with this year’s Canucks team.

Johnson on Goldobin: “He’s been great. Wasn’t a great training camp for him. I was really impressed with the way he came down to Utica, with the way he listened to the constructive criticisms on his compete to the puck.”

So they waited and watched for the lineup decisions to be announced.

That lineup news when it finally came down 20 minutes before the game?

When you see Goldy didn’t make the lineup for the Canucks game pic.twitter.com/MVjtOogBYR

And after losing the game 5-2, an effort in which the Canucks looked poor defensively and exhausted offensively….

Well they wouldn’t have been worse with Goldobin, that’s for sure.

Can we find some positives in a 5-2 loss? Of course we can.

Since coming back from injury, Eriksson’s put up 8 points in 9 games. Yes, he has three goals, but one was an empty netter and one was a lucky bounce that landed on Vanek’s stick. Really, he’s been a better playmaker. This one might be the best, though.

J.D with the breakdown:

Eriksson sells shot on that play so, so well. Draws the entire Islanders kill to him and finds Vanek for the 1-1 goal.

Rob with the adulation:

Dan with the proclamation:

They rebuilt him, made him stronger. Loui Eriksson, is the 6 million dollar man #Canucks pic.twitter.com/cnHFSbjjTC

This chart on Canucks forwards from Daryll Keeping, who’s been manually tracking the hell out of the team this season, is quite incredible.

While it’s not surprising to see Boeser at the top of this list, it does prove that his leading the Canucks in points is no fluke. Boeser is driving the bus for the Canucks offense this season, and his results aren’t just driven by a high shooting percentage.

In other news, while Virtanen didn’t look great in Tuesday’s game, he’s been great at driving the play offensively as well. If he managed to break the 10-12 minute ceiling Green’s put on his ice time more regularly, there’s a good chance good results will follow.

5. Dellow on the Canucks D

The possession numbers are awful with Del Zotto on the ice with this pair and it’s getting outscored. This has kind of been the story of Del Zotto’s career: he gets points while his team gets outscored. Past and future Florida Panther Erik Gudbranson hasn’t exactly helped out this pairing either but the Canucks have an out with him – they can trade him to Florida. I’m not sure what the out on Del Zotto is, and he’s signed for another season after this.

And while that one was interesting, this one has real impact for the future of this team:

The big picture for the Canucks is kind of fascinating. They’ve said that they don’t want to tank and you can sort of see the outlines of a team that could be OK emerging. The problem with this approach though is that it requires that you nail a lot of things – in particular, it requires that you’re able to consistently on your acquisitions of defencemen, who are a tricky group of players. Pouliot aside, Erik Gudbranson, Michael Del Zotto and the Luca Sbisa contract kind of make it difficult to have faith that Vancouver’s management group will do it. Tanev is the cornerstone to the whole thing and he, obviously, pre-dates the current group.

He makes a good point, you know.

The Canucks lost against the Islanders, they’ve lost 8 of the past 10 games, but hey, life’s not all bad.

Well @AndyCole84 asked if I wanted to form a sweet duo, and i said yes. pic.twitter.com/u2E5oZhD4N

Tony X aka @soloucity is the superstar on this one. 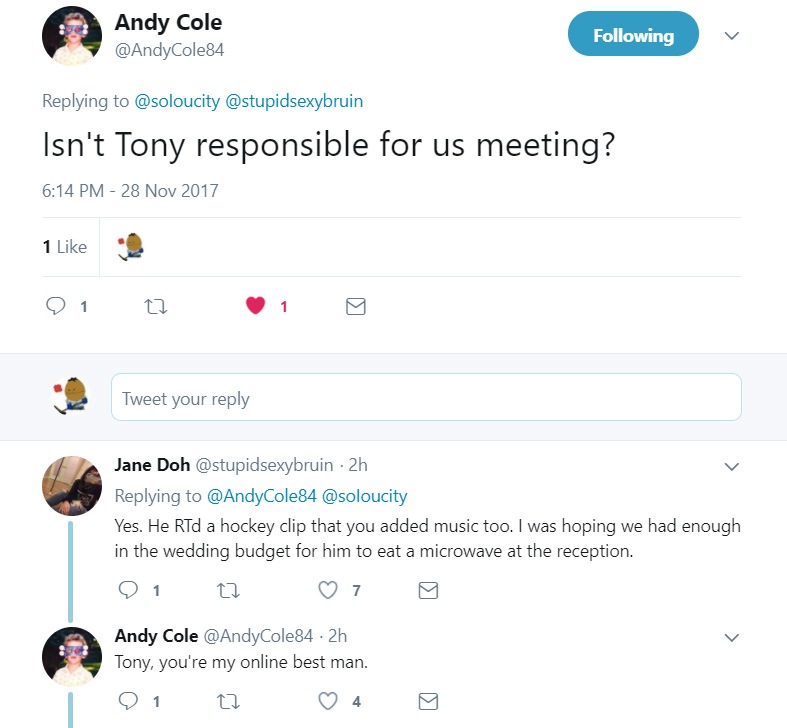 Speaking of feel-good stories, what you really look for in them is personal growth.

Here’s Brock throwing a pitch at a Vancouver Canadians game this summer.

Monday, at the NHL offices in New York… he’s getting it over the plate now.

See, that’s the kind of growth that makes you feel warm inside.