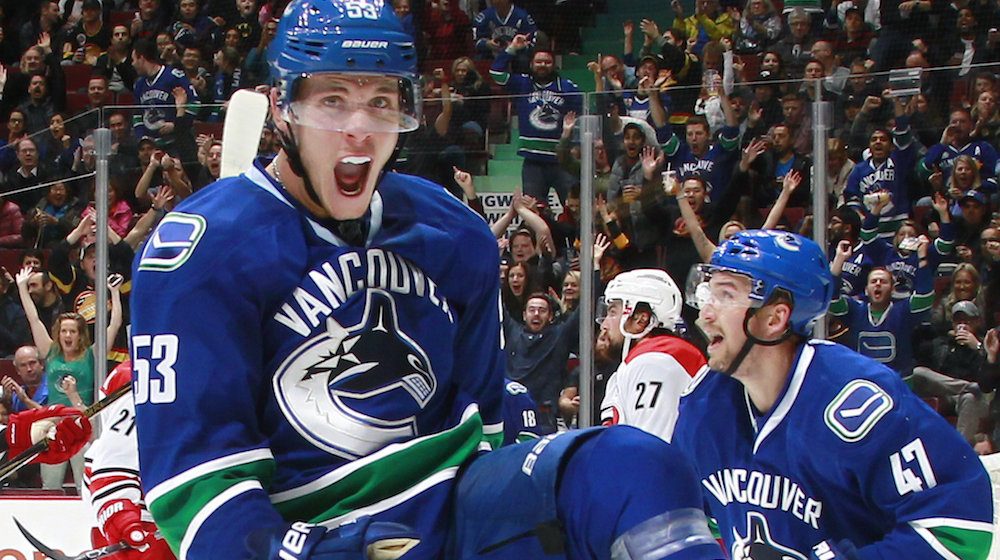 Remember that saying “You have to play a full 60 minutes if you want to win”?

If Team Canada’s 2 minute performances at the World Cup of Hockey didn’t prove it’s a silly idea coaches feed players to make them play harder, the Canucks have through two games.

(Yes, I did just compare Vancouver’s hockey team to Team Canada. Because… might as well. They’re undefeated, and this fun may not last.)

To be fair, Sunday’s game was a huge improvement on Saturday’s, where Vancouver looked listless and old for 55 minutes until the Sedins took over on one epic shift and scored the tying goal.

Against the Hurricanes, Vancouver disappeared for the first half of the second period. Other than that they looked pretty good. They had multiple scoring chances, played well defensively (other than on those three goals), and came back from a 3-0 deficit to win 4-3 in overtime.

The Canucks had 3 wins last season when trailing after 40 minutes.

The overtime hero? None other than Saturday’s shootout hero – Brandon Sutter.

Remember this from the summer?

Desjardins: everyone felt if we had Sutter, we’d have made the playoffs this yr

Could Willie have been right?

We started from the bottom now we here! pic.twitter.com/GIWsl5uaZq

After that mostly listless offensive performance to open the season, we wrote in the SixPack it wouldn’t be long until Horvat and Baertschi were reunited.

It took less than 24 hours, as they were back together for Sunday’s game.

Here’s how it worked out.

This goal started the comeback for Vancouver in the second period.

While Horvat looked much better with his new linemates, Sven Baertschi and Jake Virtanen, the line that stood out Sunday was Sutter’s. Jannik Hansen had a great scoring chance on Eddie Lack in the first period, but with Hansen you expect it. Less expected was Markus Granlund’s performance.

Granlund could’ve had two or three, and his third period goal that brought Vancouver within one proved his pre-season scoring was no fluke.

Looking at the corsi-for percentages in this chart, you’ll see the best forwards were Granlund-Sutter-Hansen. 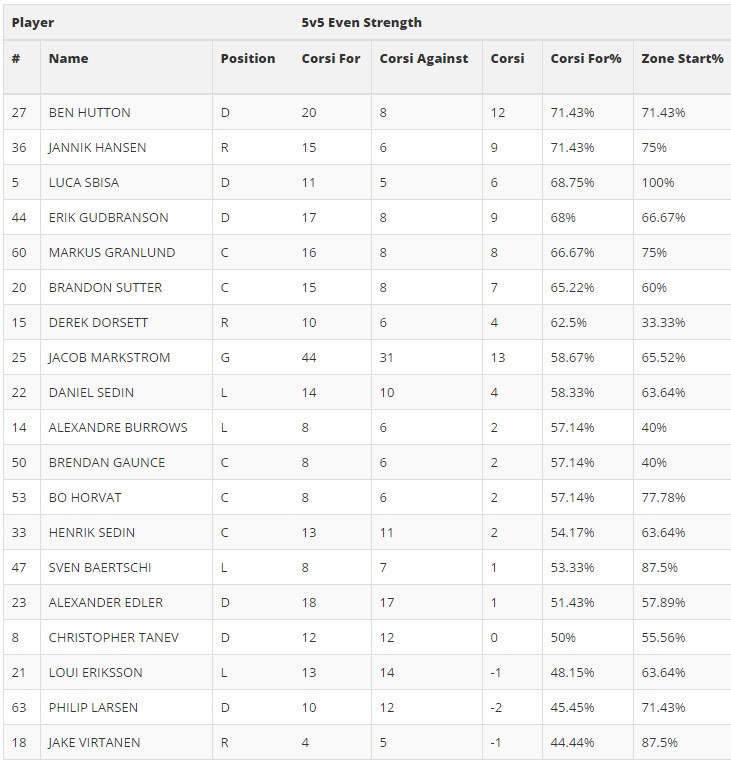 Burrows wasn’t great last season. Whether that’s because he spent most of the season playing a depth role on the fourth line and wasn’t given scoring opportunities, or it’s because he’s a lot slower now, is up in the air.

It’s probably a bit of both.

This season, he’s come in healthier and he told the Province he’s not dealing with the nagging hip issues he had in the past.

Still, with the way the Canucks are trending, it’s hard to see him being grouped with overly offensive linemates.

Since he might not get a chance to play with Bo Horvat again (no one will disagree Horvat has to be playing second line minutes and situations now), let’s see how he did play with him in the first game of the season. 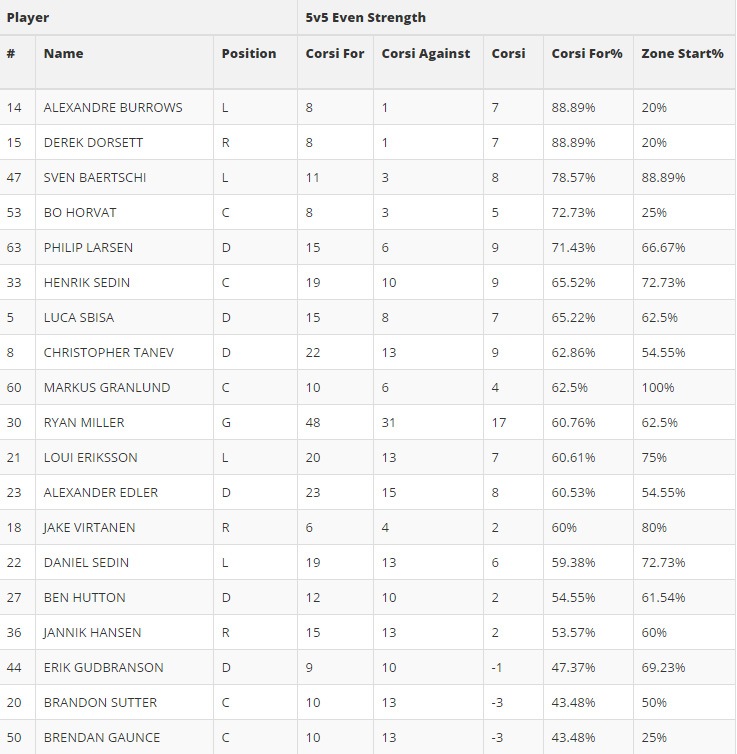 Burrows’ 88.89 corsi-for percentage was the highest on the team, and that’s despite taking only 20% of faceoffs in the offensive end.

Against Carolina, Burrows’ line didn’t dominate the offensive end the way they did against Calgary, but they did have a number of threatening offensive shifts.

They were also the line that tied up and pushed the game to overtime – Dorsett made a beauty pass from behind the Hurricanes net to Ben Hutton in the slot for the goal.

Markstrom wasn’t exactly hung out to dry on the first two goals, but it’s hard to see many goalies stopping these.

Notice how the second bounced off Gudbranson and landed right on Tuevo Teravainen’s stick, leaving him with a wide-open net to score on.

The third goal – he got punk’d. See for yourself.

What Gudbranson was doing here is a mystery.

It almost looks as if he was trying to bank the puck into his own net off Justin Faulk.

1. Early last season, after the Canucks had lost a few 3-on-3 OT games, we wondered in the SixPack if it would be better to split the Sedins in the extra period, so we have to give Willie credit for being creative.

2. Asked about why he put Sutter and Daniel together to start OT, Willie said, “We went with them last year, and last game they started together and they had a great overtime together. I think you can go either way with them. Loui’s kind of the odd man out, he thinks the same way as them, so it’s kind of like you still have that combination together somewhere along the way.”

My interpretation: Loui’s one of the twins in Willie’s mind.

Willie was also asked about the success of the Horvat-Baertschi-Virtanen line. His response:

“We started the third period the other night with that combination, so obviously I’d been thinking about it for a little bit. It doesn’t really matter on the lines, it’s the guys that work on the lines and work in it.”

My interpretation: uh… no idea.

6. Not to get carried away…

But the last time the Canucks came back from three goals down to win, they were in the midst of their second Presidents Trophy season…

Via @EliasSports: The @Canucks rallied from a three-goal deficit to win a game for the first time since Dec. 8, 2011 (4-3 SO W at MTL). pic.twitter.com/YUO5wIOhlA

Hell, might as well enjoy it while it lasts.

Note: Thanks to Ryan Biech for the colourful, dynamic gifs in this post