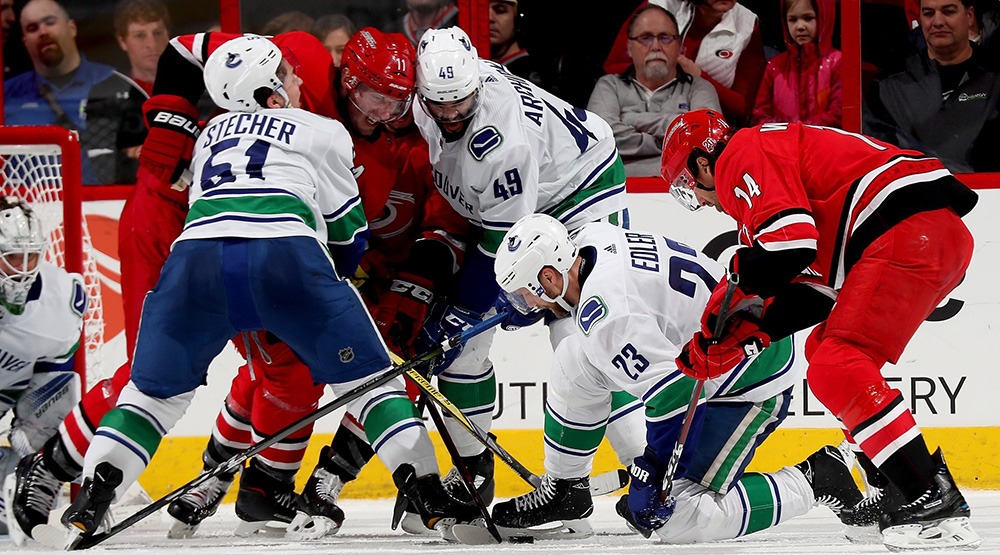 To be honest, it should have been implemented before the puck dropped.

Gaunce, Granlund, Tanev – we already knew they were injured and wouldn’t be playing against the Hurricanes. Then, mere seconds  before the game, we heard Boeser was out too (and by seconds, I mean hours).

When that happened, we knew two things.

First, any chance Vancouver had to win this one was vaporized.

Two days ago we had Boeser, Tanev, and Daniel Sedin’s two front teeth. Now we have no Boeser, no Tanev, no Daniel Sedin’s teeth, and no hope. #Canucks https://t.co/SLCieE97FP

Second, Canucks Twitter would get to the bottom of the injury.

Botch reporting it’s the Girardi hit that did the damage to Boeser. You can see him get up and flex his right hand once after the hit. Might have jammed it falling hard to the ice or even on the initial collision pic.twitter.com/3apTcA8m5C

Great work by Wyatt showing the play he got hurt on.

As for the game… 14 seconds in, Carolina scored.

Shot attempts were 21-11 Carolina in the first, the score was 3-0 after 20 minutes, and though Vancouver had a better effort than they put up in either Tampa or Florida, they really never got close.

The Canucks lost 4-1, but stuff did happen. Now, let’s talk about that stuff.

1. Are we sure compete is in their nature?

Already mentioned first period shot attempts: 21-11 (ES) for the Hurricanes. The score was 3-0.

Vancouver fought back in the second, leading even strength shot attempts 15-9 and scoring a goal too.

But in the third period, the Canucks ran out of gas. Carolina led shot attempts 21-7 (ES) and scored another goal to put the game away.

In past years, they told us “Change is coming.” It came – they got worse.

This year they told us “Compete is in our nature.” It was, until the end of November.

Should they change the slogan halfway through the season?

Edler and Stecher were not the only ones at fault. Still, Carolina scored four goals yet five of Vancouver’s seven defencemen weren’t on the ice for a goal against.

The first one was more Virtanen’s fault than theirs. First he gave it away, then he watched when he should’ve be back checking, then the puck was in his net…

How porous is that D, though?

Back to Jake – pretty much the worst way to thank the coach for letting you play with 53 and take the opening faceoff, isn’t it?

No surprise he spent the rest of the game on the fourth line and played the least minutes of any forward at 13:07.

After watching it loop over and over again 500 times… can we just blame every Canuck on the ice for this one?

That or management. Whatever you think is fair.

Stecher didn’t catch up with his guy here, but the scapegoat? I’d put it on Eriksson for that weak excuse for a forecheck right at the beginning of the sequence (at the top of the screen).

Oh, and Jake had a pretty good view of it too.

Stecher and Edler didn’t have a good game, of that there is no doubt. They were on for all four goals against and they were the worst defensive pair in shot attempt differential – minus-10 and minus-11. Next-worst were Pouliot and Del Zotto at minus-6.

The kid owned it too.

#Canucks Stecher: ‘you want to point a finger, point it at me’

Still, anyone who’s still sticking around through Canucks games had to be impressed with the way Stecher fought through it. With the Canucks facing a three goal deficit twice in the game, he never gave up for a moment.

This block on the PK was representative of Stecher’s efforts, however futile they were.

And this rush in the third period is just another reason we love this kid.

Now, just imagine Stech spends some time with Boeser in the off season, working on that shot… and stop before you get too excited about the potential.

I could watch Vancouver’s goal a thousand times and still have no idea how it went in.

Don’t waste your time watching it a thousand times. Go watch the Olympics or go out. Do something better.

We’ve spent a lot of time talking about how Del Zotto never gets scratched this season.

I SixPack’d Dave Tomlinson’s reasoning months ago – that the team doesn’t want to scratch anyone it signed through unrestricted free agency for fear of making Vancouver an undesirable destination.

That line of reasoning, man – it was such a stretch of logic that really, only Tomlinson could’ve come up with it.

Now, finally, finally, someone’s getting to the bottom of the story.

“He’s definitely got one of the best work ethics I’ve ever seen,” said McCann.

Which meshes with what Del Zotto’s trainer, Matt Nichol, told The Hockey News a few years ago: “ … He’s pushing other guys in the gym. He’s not shy to grab a guy and say ‘Hey, come on, we can squeeze another rep out, who’s with me?’”

Once you read that, that ‘A’ that’s been pasted to his sweater makes a lot more sense.

If you read it the way I do, it’s an A for effort.

In reality, it’s MDZ’s work ethic that has made him Green’s golden boy. It’s certainly not his effectiveness on the ice. 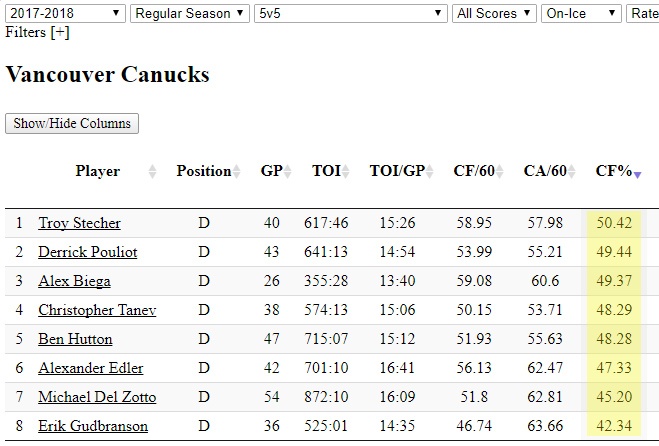 With a team full of young players, Green has spoken often about the culture he’s trying to instill. He’s talked about having players you “win with”, not those who simply score goals.

Now, even if MDZ is not the player who the Canucks will win with once they are decent, with one of Green’s main tasks being the development of young players, perhaps the signing of MDZ for a few years, and the installation of him as a huge part of Vancouver’s leadership group is a calculated, move by him and Canucks management.

It may be one of their smartest moves too.

Despite their Players Tribune article in September that was supposed to allow the Sedins to play out the season in peace, they’ve still been one of the major talking points for the Canucks all year.

In the past month, their impending retirement – whether it’s after this season or not – is being addressed daily. (If we’re being honest, Jim Benning deserves a huge amount of credit for lighting that firestorm in the media).

Another topic Canucks fans and media can’t seem to get enough of – Jake Virtanen.

In both situations, you have to feel for what the players and their families are going through.

For the Sedins, it feels as if half the fan base is ready to push them out the door, saying they’re holding the team’s rebuild back.

@omarcanuck no matter how you look at it and I’ve been saying it for the past 2 years , Sedins are done & should retire. They score points at useless times and never a game breaker. Retirement is inevitable #goaheadabdhateme

With Virtanen, comparisons to Ehlers and Nylander will never go away, plus the daily analysis of his ice time and his becoming the “type of player you win with.”

Jake Virtanen is like one of those contestants on Ferrell’s Celebrity Jeopardy. “Write down ANYTHING, and you win”. Do something. Anything. For the love of God. #Canucks #Canes

The sad thing for all three is they’re taking a ton of bullets for a situation they’ve had no hand in creating.

Think about it this: three years ago, the Sedins were already saying they would be happy to have their roles reduced, to be part of a supporting cast as skilled, younger forwards replaced their minutes in the lineup. They were even excited about being a part of that rebuild.

Now, in Linden and Benning’s fourth season, that “rebuild” or lack thereof has become such an issue that 50 point seasons from the Sedins – what should have been a great addition as part of a supporting cast – are not enough. They are still needed to carry the team.

And Virtanen – is it his fault he’s not living up to the hype of being the sixth overall pick?

Or is it someone else’s fault for drafting him above where he should’ve been taken and making him face this pressure in his hometown every single day?