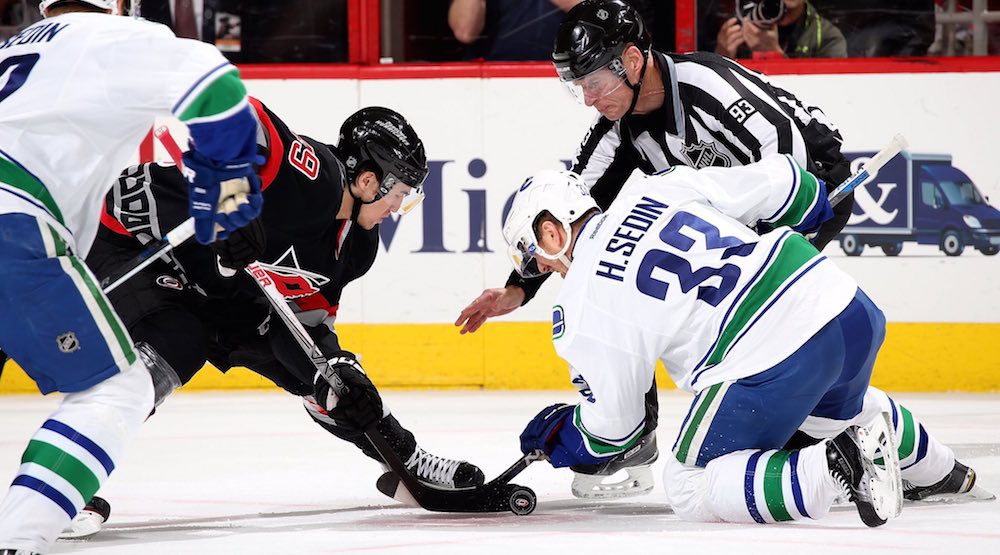 Well, that was… Something.

The Canucks looked home and cooled after 40 minutes with a 5-2 lead. Start writing your stories, beat writers!

Pass it to Bulis’ers past and present knew something wasn’t right.

@passittobulis Last time the Canucks scored four in a period Donald Trump got elected. I don't like this.

The Canucks lost 8-6 in Carolina on Tuesday night in what was probably the wildest, most undisciplined game of the season for both teams.

The teams traded goals before the end of the period, which Carolina led 2-1. The second period is where the Canucks took charge, outshooting the Hurricanes 17-10 and outscoring them 4-0. Vancouver went into the third period with a commanding 5-2 lead and looked to be in good shape to bring home a win to cap off their five-game road trip.

But with less than two weeks before the World Juniors kick off, the Canucks looked like nervous teenagers, fumbling and bumbling the game away to a Carolina Hurricanes team that sits near the bottom of the Eastern Conference.

Four goals in 4:40 from the Hurricanes gave them the lead, and 6:42 after that, they had an insurance goal.

It’s at moments like these where we usually get clarity from the SixPack godfather, Omar…

A high scoring loss is much more fun than the usual 2-1 loss, no?

What an eternal optimist.

Despite Omar’s surprisingly cheerful summation, this is a devastating loss for this group.

Yes, it was the last game of a road trip. They were tired. Yes, Ryan Miller was playing his first game after an injury. He was rusty. Yes, they’re still playing without Chris Tanev and Alex Edler. Their blueline is inexperienced.

These are excuses that bad teams make. This was not a game against the Chicago Blackhawks. This was Carolina.

The Canucks were praised for their structure early on this season. This did not look like a team playing with any sort of structure.

Florida blew a two-goal lead against the Hurricanes a few weeks ago and fired their coach.

During the third period barrage, Willie Desjardins refused to use his time out. In fact, he didn’t use it all game.

I wonder if someone’s calling Willie a cab.

Typically, fans find a way to blame their favourite whipping boy. Two years ago it was Luca Sbisa. Last year it was Matt Bartkowski. For a while it was whatever goalie was in the crease. This year, it’s Erik Gudbranson.

More on Gudbranson in a minute, because it wasn’t a good night for him, but this was a team collapse.

The players in front of him didn’t do their job well enough, but you’d like to see one more save from Ryan Miller, who let in six goals on 30 shots. You’d like to see a better outing from the Sedins and Jannik Hansen, who had the worst 5-on-5 Corsi ratings (Hansen was -13, Daniel and Henrik were -12 each).

Watch all five Hurricanes touch the puck as they pass through the Canucks PK box (Hansen, Bo Horvat, Luca Sbisa, and Gudbranson) with ease on the power play, before Jeff Skinner tapped home Carolina’s first goal of the third:

It was the Sedins and Hansen on the ice when they couldn’t get the puck for a lengthy shift, while Ryan Miller couldn’t track a Ron Hainsey shot that deflected off Daniel Sedin’s stick with Nikita Tryamkin standing in his way to make it 5-4.

Gudbranson got his pocket picked by Skinner before Victor Rask scored to tie the game at five:

And this is the play the Sedins made at the line, leading to Justin Faulk’s goal to give Carolina the 6-5 lead:

I wish I could pin this loss on a lone wolf, but I hear too much howling.

3. Not a good night for the big men

It wasn’t a good night for Vancouver’s two biggest blueliners.

4. Back with a Svengeance

Let’s talk about some of the positives.

Baertschi got his swagger back

After being a surprise healthy scratch on Sunday in Florida, Sven Baertschi bounced back nicely in Carolina, scoring two goals and one assist. He showed nice hands, deking Cam Ward on a rebound to tie the game at one. He fed Alex Burrows with a slick pass through a defender’s legs to tie the game at two. He looked like a goal scorer, burying a chance off a feed from Henrik Sedin to make the score 5-2 with under six minutes to go in the third.

If you’re a believer that coaches should dress their 20-best players every night, then this is evidence of a poor decision by the head coach to scratch a skilled player on a team that struggles to score goals.

Or, you realize that sometimes scratching a player is short term pain for long term gain.

So what was this the response by a motivated player receiving the message loud and clear or just the continued progress by a skilled guy? We can never know for sure, but don’t be so sure to dismiss the motivation factor. It’s one of the few cards a coach has to play.

I’m glad I typed this up after the first period, because I would have surely forgotten about it after the barrage of goals in this game.

Hainsey explodes up into Eriksson who is leaning over. Borderline headshot, borderline charging with feet leaving ice. #Canucks pic.twitter.com/5FJF4ptJ9Z

This is the reason that Luca Sbisa fought Ron Hainsey in the first period. Hainsey caught Loui Eriksson with his head down and delivered a bone-crushing check.

Hainsey appeared to hit Eriksson in the head, and left his feet, although it’s hard to see whether his skates left the ice before or after the hit because of the referee blocking the camera’s view.

.@RobTheHockeyGuy CAR broadcasters said Hainsey tried to play through the body. Not so sure about that when the head is 1st point of contact pic.twitter.com/MpKLdfTPFy

I’d love to tell you how many games this deserves as a suspension, but I’m not even sure what the standard is.

In the NHL, where the standard for suspensions changes on the daily, it’s impossible to say whether this deserves a suspension.

Let me remind you that this was deemed a shoulder-to-shoulder hit and not suspendible:

While this was deemed a headshot and a two-game suspension a month later:

Was his head down? Was the player predatory? Was he low and athletic?

Does it matter? They’re making it up as they go.

6. Where are all the Caniacs?

There was talk today about this being potentially the last game the Canucks play in Carolina and it wasn’t hard to see why tonight.

What, Tuesday night against the Canucks isn’t a big draw in Raleigh?

Know where they’d fill the building every night? Quebec City.

Given all of the empty seats in the arena, Markstom could have opted for one with better sight lines. #Canucks pic.twitter.com/aVbaJWhzoS

…Good point by Clay, but Markstrom must have known that he needed a seat near the door tonight.