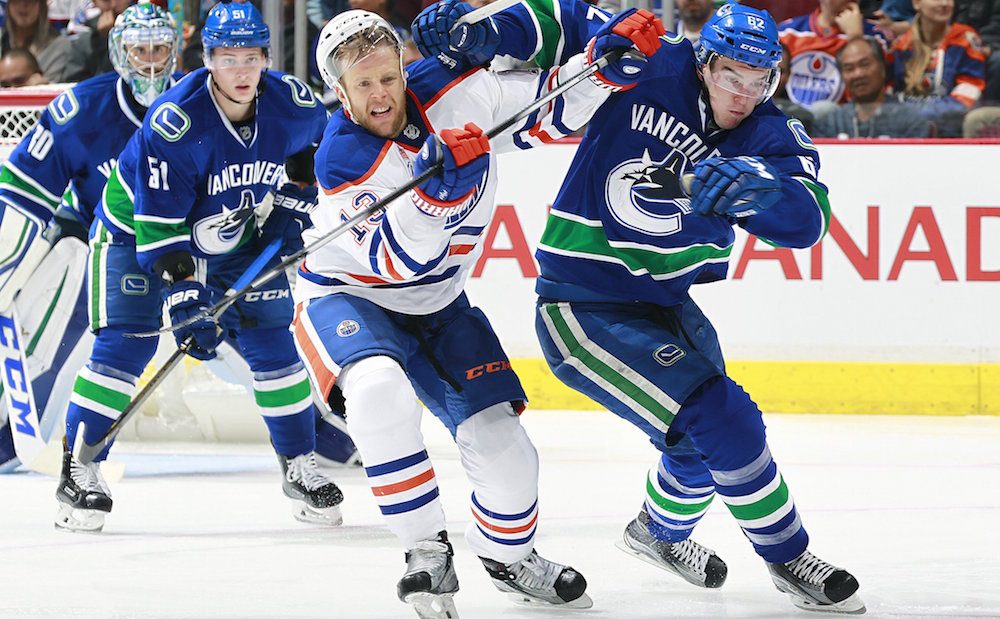 You know how you know Canucks hockey is back? People are feverishly debating the demotion of Jordan Subban to Utica.

Jordan Subban will play in the NHL, and the Canucks are gonna look like morons when he's a regular with another team

Tonight's D lines include recent draft picks, allowing fans to see/get excited abt them. Surely Subban is ahead of a couple of them https://t.co/PBtbJPKfbi

Subban sent back to Utica already. He wasn't making the team, but come on, maybe a few games?

You know how you know Canucks hockey is back? A player is already injured.

Jake Virtanen getting a second opinion on his injured shoulder but coach Willie Desjardins still says he doesn't expect it to be long-term.

You know how you know hockey is back? Another bland Canucks goalie mask has been created (you know it’s bland, don’t lie).

You know how you know Canucks hockey is back? The Fedor Fedorov Flu is in full effect two games into preseason.

@ryanbiech on a scale from 1 to 10, how big is Stecher Mania in Vancouver right now?

BREAKING NEWS: Troy Stecher has been awarded the Norris, Hart and Calder trophies for the 2016/17 season.

I always wondered how it would be listening to 1040 the day after the Canucks won the Cup. I'm pretty sure it would be close to today.

Yes, hockey is back, and Canucks fans are hoping for a better season than last year, where wishes and dreams fell apart quicker than the plot of Lost after season 2. Last season the main question was “Can the Canucks repeat the first year they had under Coach Willie?” which was emphatically answered with “No you idiot, this season is gonna suuuuuuuuuuuuuck.”

And suck it did. Make no mistake about it, last year was god awful. And not even a fun awful, in the way a bad movie can be unintentionally hilarious.

There was no Torts charging down a hallway challenging people to a fight like an enraged Winston (That’s an Overwatch reference, Rob.). There were no stories of Murphy beds being installed at Rogers Arena under the cover of darkness in the Night of the Long Bed Installations. No mind boggling stories of a coach not talking to his farm team all year or not knowing who Alex Burrows was.

No, last year was just very bland. It sort of existed like a family member staying for an extended visit. At first you were fine with them staying with you, but as time wore on you were counting down the days until they left.

On the ice. Off the ice. In the arena.

The highlight of the second half of the season was a giant Russian bear playing defence for the Canucks. Which at first glance seems amazing, because who knew bears could play hockey, but alas that was just a metaphor, and it turned out it was just a tall Russian kid. Fans were divided between “Team Tank” and “Team Win” some games because that will provide some tangible value, I swear”. It was ugly.

The trade deadline, the usual highlight for a losing team to stockpile draft picks, was devoid of action. Dan Hamhuis wasn’t dealt. Radim Vrbata, despite many people thinking he had disappeared from the team a long time ago, shocked fans by not only being alive, but by sticking around…before getting injured and ghosting again. Rumour has it his ghost has now moved on to haunt his old team in Arizona, appearing only when paired with the top line.

And to top it off, to deliver the final kick in the junk, the Canucks managed to drop down a couple of spots in the draft lottery, and ended up having to pick fifth.

Mind you, time will tell on the draft pick. For all we know, Juolevi will end up the steal of the draft and Canucks Nation will giggle with glee every time they think about the 2016 NHL Draft. It was just the indignity of having to drop draft spots after the season the Canucks had last year felt like a personal jab from the Hockey Gods themselves.

The point is not to depress you of course. It’s just at the start of a new season it’s always good to look at where we came from, and then suckle on the teat that is preseason optimism. Nothing is better than looking at how last season ended, then going out and watching the young kids fly during preseason.

Other things we can look forward to, aside from Stecher crushing Connor McDavid-mania for one game?

Bo “I will cram this puck down your throat on an end to end rush so help me god” Horvat should have an easier time of things now that Brandon Sutter isn’t broken. Baertschi and Hutton were one of the few shining stars on offence last year not named Sedin.

Virtanen remains a question mark, but the interest (and hype) on him remains quite high, and since it’s preseason, we can all still pretend this is the start of his first 40-goal campaign. Assuming his shoulder isn’t broken in half.

Will he be a decent 2nd line/3rd line centre? Or is he highly overpaid for his role?

He came from Pittsburgh after being burned alive by some of their stats fans (he was described as “mediocre at best, irrelevant at worst.” which is, like, the ultimate stats burn) which meant many advanced stats fans in Vancouver were rolling their eyes at him. “This guy? This is a guy you think should be a second liner? This guy generates fewer shots for than a bull produces milk!” (I am told this is another severe stats burn).

Sutter is a large question mark in that 2nd line role, and even if he drops down to a 3rd line role (if Horvat takes off), his 3rd line abilities are also in doubt. Will Sutter take off in Vancouver, proving doubters wrong? Or will he be another big salary cap liability?

The Sedins and Loui Eriksson

It used to be an annual contest the Canucks would hold, the “Become the Sedins linemate for a while”. Such notable write in winners like Jason King, Anson Carter, and Trent Klatt had the honour of taking on that role at different times.

Alex Burrows ended up being the biggest winner of the contest, spending several seasons with the Twins, but it then became an annual contest of “How can we replace Alex Burrows as the linemate of the Twins” despite him doing quite well there.”It’s good, but it can be better….get me Radim Vrbata on the phone!”

Now that age has caught up to Burrows and Vrbata died, the draw of finding “the perfect linemate” for the Twins had started anew, and Loui Eriksson is looking like the next big thing. His play with the Twins at the World Cup of Hockey has been electrifying, the chemistry undeniable. If there is any hope of the Canucks having a run at the playoffs this year, it will be on the backs of Loui and the Twins, which has many fans excited.

Yes, after the Florida Fleecers (Formerly the Van-City Stats Mafia) traded Gudbranson for a package that included Jared McCann, many eyebrows were raised. After all, if the stats guys Florida keep hiring away from Vancouver want a player on your team, there has to be some stat they’re valuing that you’re not getting from the new guy.

Gudbranson is a great example of old school vs new school, with people who value a big mean nasty d-man vs people who value Corsi. And as Daniel Wagner outlines in a great article, there is plenty still up in the air over Gudbranson, so it’s hard to land on one side of the debate or the other.

The one consensus people have is that he lacks offence to his game, which is why that Hutton/Gudbranson pairing seems so damn intriguing. Hutton is always smiling, Gudbranson always scowling, HOW WILL THEY CO-EXIST?? They will have the most eyes on them on the defence to start the season, should they play together.

Of course, there are many other things to look forward to. Training camp standouts, Willie Desjardins moustache watch, Jim Benning looking slightly confused, appreciating another season of the Sedins, Trevor Linden’s endless time share optimism, Ryan Miller and Jacob Markstrom battling for the nets, Sportsnets 24/7 coverage of Connor McDavid and Auston Matthews, which is just to name a few. Who knows what other surprises this season has in store for us.

The point is, hockey is back folks. And it’s time to start arguing online again. As is tradition.