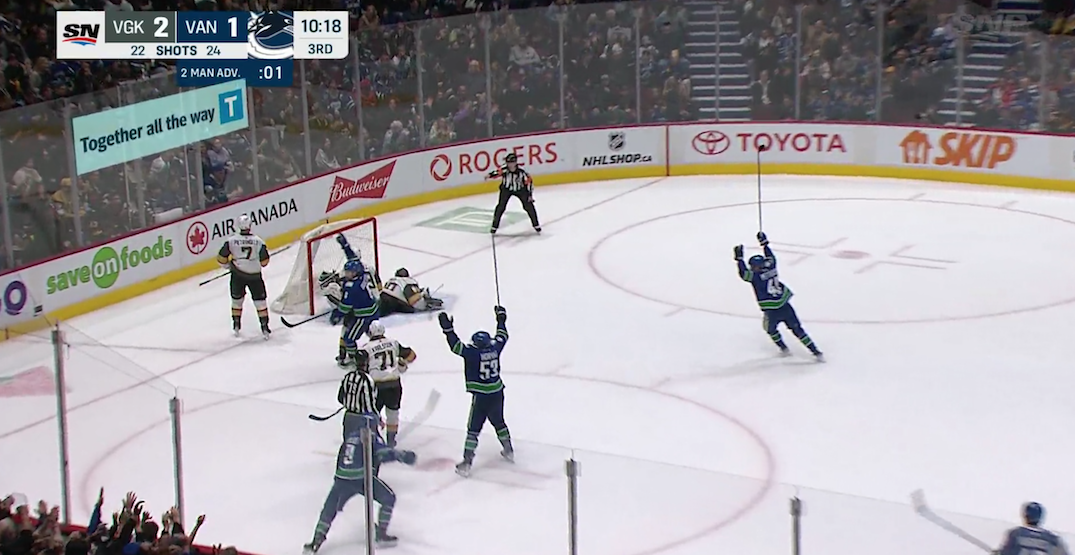 The Vancouver Canucks scored the weirdest goal of the season tonight, without even touching the puck.

Midway through the third period, the Canucks got a power play goal from Bo Horvat, which tied the game against the Vegas Golden Knights after J.T. Miller scored earlier in the period to cut the 2-0 lead in half. While Horvat was credited for the goal, he had very little to do with the puck going in.

William Karlsson beat Horvat clean off the draw, sending the puck back towards his own net. Vegas defenceman Alec Martinez reached out to get a stick on the puck, resulting in him inadvertently deflecting the puck past his own goalie, Robin Lehner.

If this were soccer, it would have been credited as a Vegas own goal. In hockey, own goals are usually credited to the last player on the scoring team to touch the puck. In this case, no Canucks players touched the puck on the play, so the goal was given to Horvat, because he took the faceoff.

If you were watching on television, you missed the goal initially, because it went in so quick.

So that's how it went in 😏 pic.twitter.com/bdNUUdLQkK

It was a hilarious goal, but unfortunately for the Canucks, the Golden Knights got the last laugh, winning 3-2 in overtime.