Vancouver outhit, outplayed and outshot the L.A. Kings on Monday, and they sent a message too, but how about winning the game?

Every Canucks fan who watched Monday night’s game against the Kings was fully entertained. This, despite the fact their team lost 1-0.

For many of them, this game was about responding to Dustin Brown’s hit on Roberto Luongo on January 3.

After the game a war was waged (on Twitter and radio) between those who believe Vancouver had come out on top, and others who were worried about the outcome on the scoreboard.

Listening to Canucks players’ and coach’s comments after the game, it is clear how they felt.

“In all parts of our game, I thought we played well.”

“I thought we did a really good job as far as deciding that that ice is ours.”

“We got squawked for points, but I think we crossed a couple of bridges in what needs to be done.”

On spending most of the first period short handed, he added:

“It’s one of the most positive losses I think you could have.”

“We outbattled them. We outhit them, We were more physical. We dominated them. They got a lucky bounce, it turns into a three-on-one and that’s the ball game.”

“Everyone knows what happened to Roberto. We wanted to come out and play a really good game … and make a little bit of a statement, and I thought we did.”

Who didn’t think the physical game was imporant, you ask? Well, Blake Price of the Team 1040 had his own word for that part of the game:

In my opinion, best part about the Canucks game tonight, was not the antics, but the team defence and goaltending.. A far more proven path

True, Vancouver failed to score on Monday, but looking at the underlying stats, they actually generated more chances than the Kings: 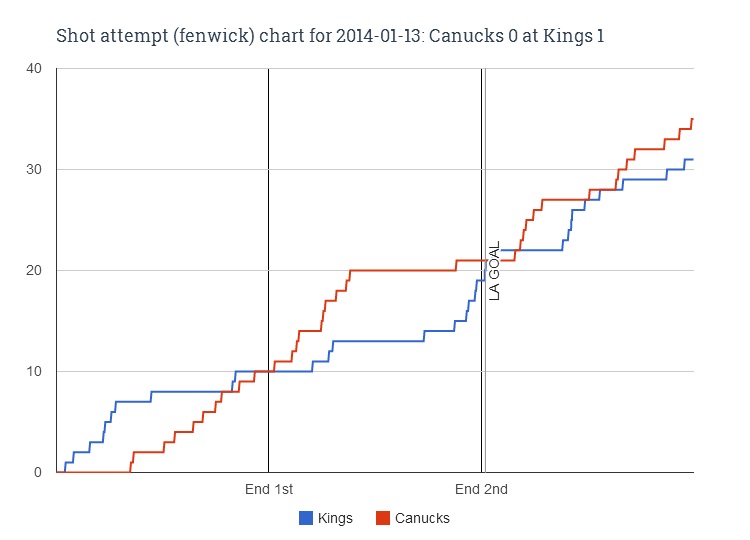 This chart shows that the Canucks generated more scoring chances than L.A. and they outplayed them despite the disparity in penalties (Vancouver had 69 penalty minutes, while L.A. had 40).

Price had more to say about the Canucks’ goalscoring issues:

@omarcanuck Did they score enough goals? they were 16th in the league going in.. at least 17th coming out

He’s right, they are 17th in goalscoring over the course of the entire season, but since December began (and they started clicking under Tortorella), they have an average of 3.10 goals per game. That number would be good enough for fifth in the NHL right now.

Meaning they can score. And on Monday, we found out they have a backbone too. To me (and the players apparently), that’s important. What’s your take?