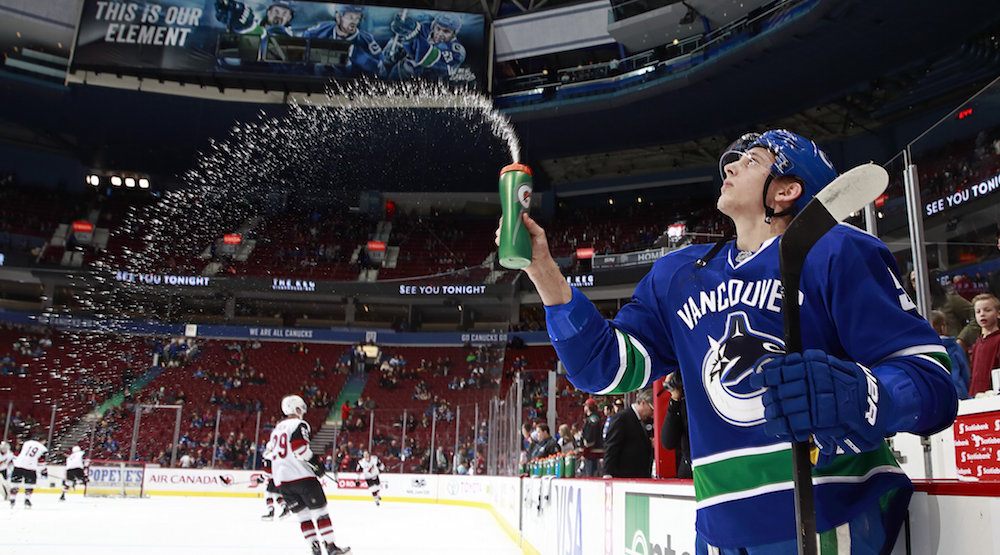 Don’t let the wins fool you.

The Vancouver Canucks winning streak now stands at five games and it’s propelled them to within a point of the second wild card position in the inferior Western Conference.  Yes, it’s hard to believe that a team widely considered by many to finish in the basement of the NHL standings this year is one-game above .500 (19-18-3) roughly halfway through the season.

#NHL standings since Xmas. 2017 Year of the #Canucks? Probably not, but frame this and remember the run pic.twitter.com/0pCSUN09gs

But that shouldn’t deter you away from what the long-term vision or identity of this club is perceived to be.

It’s hard not to feel a sense of optimism right now the way the team is playing. Beating bottom feeders like the Arizona Coyotes and Colorado Avalanche is nothing to boast about, but they pulled out impressive wins over their Pacific partners — the Edmonton Oilers, Los Angeles Kings, and Anaheim Ducks prior to the new year, all of whom they’re chasing in the standings.

They’ve won eight of their past 11 games on the backs of Sven Baertschi and Bo Horvat, who’ve emerged as legitimate secondary options behind Daniel and Henrik Sedin. The last time the Canucks had a winning streak this big, John Tortorella was calling the shots behind the bench and he stretched it to seven.

Separation speed Horvat has when he finds his top gear is scary fast. Worked on cutting down steps & maximizing his strides. #Canucks pic.twitter.com/WQ9SWeF73P

From a production standpoint, the Canucks “second line” is currently producing at a rate you’d expect from the Sedins at this point in their careers, noted by Horvat leading the Canucks in the calendar year of 2016 with 55 points and currently leading the team in overall scoring.

Sven has been, well Sven-sational, of late. Don’t read too much into the head-scratching healthy scratch narrative. He was playing good hockey prior to and has tallied 11 points (7G, 5A) in his last 12 games while emerging as one of the best even strength point producers in the league relative to his ice time.

Youth movement on the back-end

The young defensive core held their own while Chris Tanev and Alex Edler missed time on the injured reserve. The return has given a trickle-down effect to the rest of the Canucks defensive pairings.

Troy Stecher has become a staple on the blueline following his demotion to Utica to begin the season. He’s third in shots on goal for rookie defencemen, trailing Mike Matheson of the Florida Panthers and likely Calder candidate Zach Werenski of the Columbus Blue Jackets.

New #1MinuteTactics : it seems like @Canucks have unearthed a gem of a D-man in @troystecher. Here's how he uses speed & guile to defend. pic.twitter.com/xSMpg4mDLo

Nikita Tryamkin has proven to be, at worst, a bottom-pairing guy that has the potential to develop into a penalty killing specialist, or a traditional shutdown defender. Once his conditioning, communication skills, and confidence improves, early indications point to Trymakin being a serviceable defenceman for the Canucks down the road once he settles into a comfortable role. The big Russian blueliner’s best asset may be his reach, as he’s shown an unique ability to disrupt the oppositions’ offensive-zone cycles down low.

Who let the russian bear out of the cage? #Canucks pic.twitter.com/m8WdPauc6y

He also teased Canucks fans in their 3-0 victory over the Coyotes on Thursday by wheeling behind his net on a sharp angle and skating it out through the neutral zone and firing a slapper on net that almost eluded Mike Smith. The big man moves quite well once he hits his stride.

The Canucks haven’t had an influx of players make an impact like this in a remarkable amount of time.

Bit of a scary stat: #Canucks have only 2 draft picks since 2007 that have 50+ points in their career. Horvat and Hodgson.

The succession plan of the Sedins has long been pondered by many pundits when envisioning life for the Canucks could look like after they call it a career. And it’s a completely fair criticism when you consider the Canucks poor drafting history and asset management.

Granted, the Canucks have been a contender and have missed the playoffs only four times in the last 16 seasons, but there’s no denying that former general managers Brian Burke, Dave Nonis, and Mike Gillis created a big hole for Trevor Linden and Jim Benning to inherit. From 2002 to 2012, only 10 players drafted by the team managed to play 100 NHL games, which was lowest amount in the league during this duration.

What should’ve been the current core was lost and was left with an aging group of veterans built around the Sedins that have, one-by-one, slowly left town. It’s precisely why a good portion of Canucks fans and observers believe this team should eventually be blown up and follow a path similar to the one of the Pittsburgh Penguins, Chicago Blackhawks, Los Angeles Kings, or Boston Bruins, especially when you see the drafting data of the successful teams compared to the Canucks.

Trevor Linden and Jim Benning have publicly insisted that the Canucks goal is to become a better team and compete for a playoff berth, all while trying to slowly integrate young talent into their aging core. Without getting into the semantics of the rebuild versus retool discussion, the Canucks are essentially catering to two parties at the same time.

And whether you lean towards a rebuild rather than a retool, the team is sticking to their plan, and that ambiguous plan is starting to reveal itself.

Coming into the season, the Canucks were the 14th youngest team in the NHL after starting the 2015-16 season as sixth oldest team. For the first time in recent memory, Vancouver has a young core led by Horvat and Baertschi, along with Brendan Gaunce, Markus Granlund, Nikita Tryamkin, Ben Hutton, Troy Stecher, and recent waiver-wire pick-up Reid Boucher that are all under the age of 25 and represent a blueprint for the future.

Factor in Thatcher Demko, Jake Virtanen, Olli Juolevi, William Lockwood, Adam Gaudette, and Brock Boeser, and you can start to piece together a future group that could compete with the likes of the Oilers, Flames, and Jets going forward.

Although this year’s draft is believed to be weaker than previous crops, the need to build up to their prospect pool to not only compete, but win, against their Western counterparts is more evident than it’s ever been with the likes of Connor McDavid, Johnny Gaudreau, and Patrik Laine producing at premium rates.

As much Jim Benning gets questioned and criticized for some of his moves like the Brandon Sutter and Erik Gudbranson trades, the Derek Dorsett and Luca Sbisa contract extensions, or signing Loui Eriksson to a six-year deal, the Canucks GM deserves some credit for attempting to reconstruct a franchise that was left with practically nothing by previous regimes. Drafting Tryamkin, signing Stecher, and acquiring the Calgary castoffs in Baertschi and Granlund are pieces to a bigger puzzle. The former scout Benning has shown a knack for finding young talent, and should continue to do so.

No matter how many games they win, or how close they get to a playoff spot, there’s still a massive need for a legitimate top-end scoring forward and true legitimate number one centre. A game-breaker that is worthy of the price of admission to dissuade away from the “Canucks are too boring to watch” narrative is imperative to their future.

There’s a continuous need for the team to accumulate assets, whether that’s draft picks or prospects ready to take the next step. And the winning streak or playoff push really doesn’t change any of that. The team’s identity and vision is constantly in flux, but the Canucks future may not be as bad as you may think. The decisions they make going forward have to be prudent and must be in the long-term best interest of the team.

But how do the Canucks keep this team in the playoff hunt while trying to build up his prospect pool?

Do they look to dangle Alex Burrows at the trade deadline, or look to capitalize on Jannik Hansen and his friendly $2.5-million cap hit? Or, is there an expendable defenceman that could yield a decent return with the emergence Hutton, Stecher, and Tryamkin? That could be a difficult endeavour considering Burrows, Hansen and Alex Edler all have no-trade clauses, and we all remember how last year’s trade deadline went down when Jim Benning’s was stuck with limited options.

The Canucks can’t remain quiet and strike out for the second straight season after failing to get at least something for Dan Hamhuis and Radim Vrbata last March. Management knows deep down they must keep injecting the team with young talent. It’s why they preach patience to their fan-base to trust the plan in place.

Until the Canucks fully commit to their long-term future, the franchise will remain in a purgatory zone where they’re not quite a bottom-feeder, but not good enough to do anything noteworthy in the postseason, a theme that is all too familiar in the 46 seasons of this hockey club.