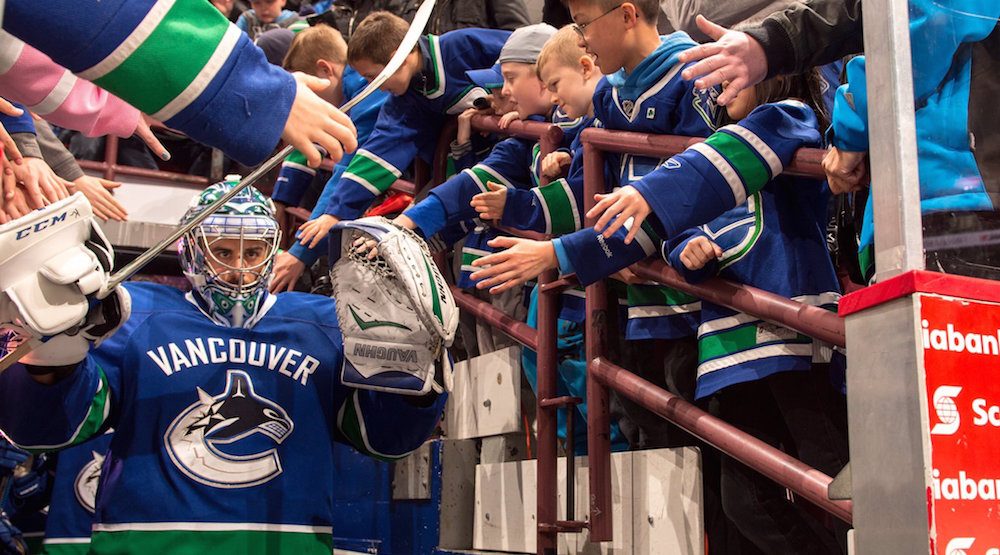 However, the Canucks managed to ride an Alex Edler knuckle-puck, a stellar game from Ryan Miller, and a Chris Tanev OT winner to pick up two big points, spoiling the much-lauded return of former Canuck Matt Bartkowski.

Brian Elliott, you just got straight up knucklepucked, son! pic.twitter.com/GPznlslcz9

Two more points tonight against the Philadelphia Flyers would probably give Jim Benning just what he needs to proclaim the Canucks a buyer at the trade deadline… Yay?

After a huge game last night, Willie Desjardins has confirmed that Ryan Miller will start tonight against the Flyers.

Jack Skille injured himself last night, so Reid Boucher should appear in his seventh game as a Canuck, playing on the fourth line.

1. Back-to-back before the bye

In 12 games on the second half of a back-to-back this season, the Canucks are 5-7-0. The Flyers haven’t played since Thursday. It’s just another example of Vancouver playing on “no rest” against a rested team that hasn’t played the night before.

"Tired" (played last night") vs "rested" (did not play last night) for the 16-17 season. pic.twitter.com/QbiJUkuj6X

As you can see, the Canucks have a fairly unfavourable schedule when it comes to games on consecutive nights.

With the now infamous bye week commencing following tonight’s game, you probably won’t see the players hold back much. You might see Willie Desjardins pull out all the stops – like playing Miller in back-to-back nights – knowing his team will be able to rest before their next game on Saturday. We could be in store for another barn burner like we had in Philadelphia on January 12.

The last time these two teams met, it was a high-flying (pardon the pun) game with over 70 combined shots and eight goals. Philadelphia ended up winning 5-4 in a shootout and though it may not have been a lot of fun for the coaches, it was an exciting game for spectators.

The major issue in that game was the Canucks power play. They went 1-for-8 and didn’t manage a shot on a late third period opportunity. It’s something the Canucks have struggled with all season, save for a few runs here and there.

Trying to find the perfect gif for seeing Megna on the PP repeatedly pic.twitter.com/L1vASTRVkM

The personnel choices and schemes have left many scratching their heads for the majority of the season. Since January 1st, Jayson Megna has had 27:14 of power play time. That’s more than twice as much as Alex Burrows (6:47) and Jannik Hansen (2:15)… COMBINED!

You’d think Jim Benning would be encouraging Desjardins to place Burrows and Hansen in every position to improve their trade value a la Mike Gillis with Cody Hodgson a few years ago.

Sadly, that hasn’t been the case.

The Canucks are in a bit of a hole and their opponent tonight knows exactly how that feels. The Philadelphia Flyers are just 2-5-1 in their last eight games, having been outscored 22-11 in that span.

This run of poor results has taken Philly out of a playoff spot – one that they’ve held for the majority of the season in a strong eastern conference. Part of the problem has been the Flyers top scorers’ recent output. In those eight games Jakub Voracek (4 points), Claude Giroux (2), Wayne Simmonds (3), and Brayden Schenn (3) haven’t produced at the pace fans have grown accustomed to.

To put things in perspective, prior to these last eight games, Voracek had been scoring at a 0.88 points-per-game pace for the season; Giroux at 0.8, Simmonds at 0.76, and Schenn at 0.72. It doesn’t take a mathematician to figure out they’re not producing at that rate recently.

Even last year’s Calder Trophy candidate Shayne Gostisbehere has gone cold, having not scored in 31 games.

That being said, Philadelphia is still just three points out of a wild card spot. It’s a log-jam in the east with seven teams within four points (Florida at 64 points not pictured) and five teams within three points fighting for that coveted playoff position.

That’s why, while I think the Canucks are going to take one on the chin against the Flyers tonight, I’m predicting a 3-1 win. Oh, and one of those goals will be on the power play courtesy of Jayson Megna.