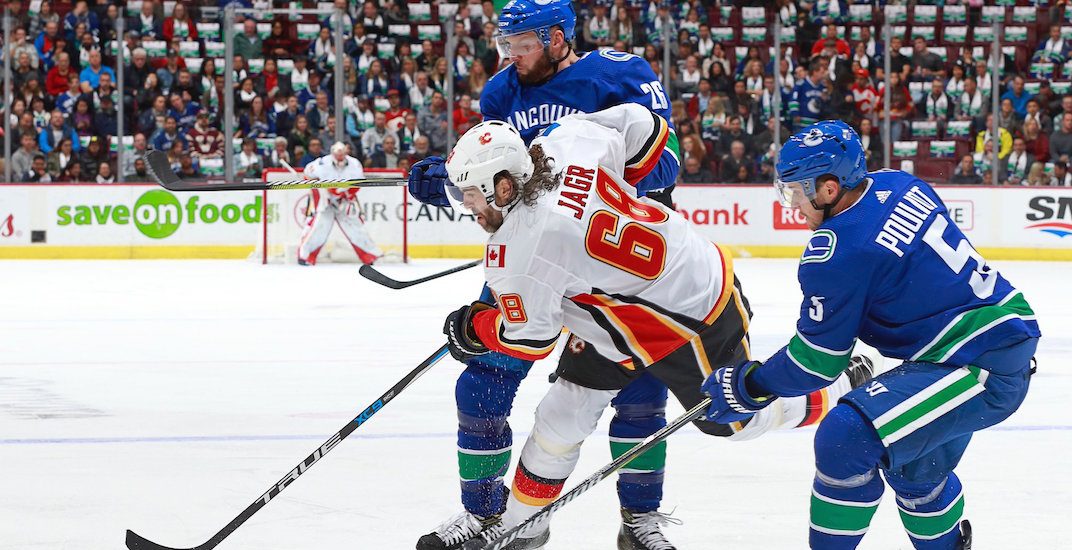 The promise from the team was special teams would be different this year.

To be fair, the Canucks tried to make that happen. They brought back power-play coach Newell Brown and signed free agents Thomas Vanek, Sam Gagner, and Michael Del Zotto – all power-play specialists. They removed Brandon Sutter and now have Bo Horvat’s unit starting many power plays.

But that power play was front and centre Saturday night, and if anything should be blamed for Vancouver’s 5-2 loss to the Flames, that’s it.

Obviously your goalie deserves blame too if he allows five, and we’ll get to that, but through two periods, Calgary had taken 14 minutes in minors while Vancouver took 4. The Canucks had one shot on net during all those power plays.

Not only that, Calgary scored a shorthanded goal just seconds after Vancouver’s only 5-on-3 advantage expired.

Things were so bad this fool was a metaphor for the game. And I’m sorry I have to do this.

Looking at the underlying numbers, the Canucks outplayed the Flames in the first and third periods, while the Flames owned the second. A few defensive lapses coupled with a really really bad power play is what did them in.

If they want to win any more games this season, they better fix that first. Playing Boeser on it as much as they can would be good a start.

1. Don’t heap the blame on Marky

As I wrote before, Markstrom didn’t have the game of his life.

Some of the goals were unfortunate, though. Here’s the third one he allowed.

Dougie Hamilton’s point shot went off Monahan’s body on the way to the net there. That shot’s more difficult to save than it looks.

Seeing this goal squeek in on Markstrom’s shortside makes him look really bad, but Del Zotto deflected it with his skate.

I don’t have a gif of the fifth, scored by Hamilton, but a screen by Pouliot didn’t help Markstrom.

Markstrom – "It was just one of those shitty days, terrible timing for it." #Canucks

Look, he allowed five goals on 27 shots, so it was a bad outing – my only point is if you broke each goal down you shouldn’t pin all the blame on Markstrom.

I’m also saying he shouldn’t lose his job as the starter because of this, though it’s hard to see Anders Nilsson not getting Tuesday’s game now.

That was his first shift of the game. Watch his left leg closely as he crashes into Calgary’s goalie.

Eriksson’s out for the game. If it’s longer, what’s your reaction?#SixPack

Before getting too depressed, let’s talk about a positive.

Here it is: Boeser is really good. At 17:34 of ice time, Boeser played third-most out of Vancouver’s forwards, mostly due to the power plays.

Thing is, he should’ve played more. While the Sedins had 8 minutes on the power play, he only had 5.

Here were a couple of plays I loved from Boeser on the man advantage. First, he’s getting mauled on the boards here, yet he has zero panic as he spins and passes the puck back to Henrik.

Later, he received this gorgeous cross-crease pass from Vanek.

Many will hate that he didn’t shoot, but notice how he got the pass on his backhand and by the time it was on his forehand there were two Flames ready to block him. That heads-up look and waiting for the right play is the kind of poise you’d see from goalscorers like Markus Naslund.

When the Canucks had a 5-on-3 in the first, Boeser was replaced by Gagner on PP1. And in the third period, he was taken off the first unit and replaced by Pouliot.

Since we’re talking about poise and Pouliot, I want to show you this:

With two Flames chasing him, the newest d-man skated back, out of trouble, and got the puck safely back up to his forwards. With Edler out, I’m not sure the Canucks have another defenseman who can turn a potential disaster into a neutralized play so effectively.

Back to Boeser, he also sniped this goal late in the game.

Gudbranson signed a ‘show me’ contract in summer. Edler gone 4-6 weeks. #Canucks need someone to step up. Seems this would be the time

How did he do?

Thanks to all the power plays, Gudbranson played just 12:08 – lowest of all Canucks defensemen. The next lowest was Stecher’s 17 minutes.

In those 12 minutes of ice time, Gudbranson managed to be a team-worst minus-5 in shot attempt differential (corsi plus-minus). Really, he did not have a good night.

He did do one good thing.

There’s Guddy, bringing those intangibles. Unfortunately they’re coming at the cost of not great defensive play at the moment.

Just one week ago, when Travis Green announced Brock Boeser would be scratched in Vancouver’s season debut, Canucks fans freaked out.

It took me 2 and a half yrs to say fire Willie. Don’t make me start wanting you gone Green

That was one of the less-viscous ones.

That makes all kinds of sense. Not.

The Canucks would probably bench/scratch Mcdavid and Crosby.

This one was on point, though:

“Why can’t we sell tickets like we used to?”

There were, however, some more level headed individuals out there. Like this dude “W” for example:

Coach has explained it enough, I’m just leaving it to green. Let the season play out as it does. https://t.co/ShdeEFue0E

I tend to agree with this dude “W”. We’re four games into the season. Boeser’s been scratched for 2, Virtanen’s been scratched once. They’re both getting a chance to play, and Green has his reasons for doing what he’s doing.

If we get to the 20 game mark and both the young forwards have sat more than they’ve played, we should by all means be questioning things. But for now, can we be patient?

“I gotta tell you in Vancouver, for me the story this week, this is a team that beat Edmonton last week. They’ve played really hard. I’m amazed at this (empty seats). I can’t believe what I’m seeing, and I’m curious to see how the owners will react. Brian Burke said when he was GM they had to battle it. The late Pat Quinn said that when the team wasn’t good they had to battle it, when the crowd started going like that, Mike Gillis was fired.

I’m curious to see what it’s going to be like because it says to me they’re not papering the house so if they’re not doing that, how’s ownership going to handle it.”

While the number of sold tickets was over 17,000, attendance was far less.

I’m not sure I’ve ever seen Rogers Arena as empty as it is tonight. Certainly not in any games I’ve covered.

To me, it’s surprising Friedman is “amazed”.

Not suprised. I still don’t know what direction they’re going. Are they rebuilding? why not play the young guys?

Fans want to see kids & feel a sense of shifting to the future. Bringing in vets in offseason & not lowering ticket prices counter to that

Hockey fans in Vancouver have been saying this stuff for a long time too. It’s nothing new. They want to watch a young, skilled roster – not a team of veterans “competing” – (by competing I mean losing).

That’s a lot of negativity and I will say this: if the Canucks can manage to go on a sustained run and show they are a playoff team, the city would become interested and pay for tickets.

But that’s a long shot, and if you want to sell tickets to watch a losing team, youth and excitement are the way to go.

And if your team manages only four shots in 14 minutes of power play time… it’s probably not going to do it.