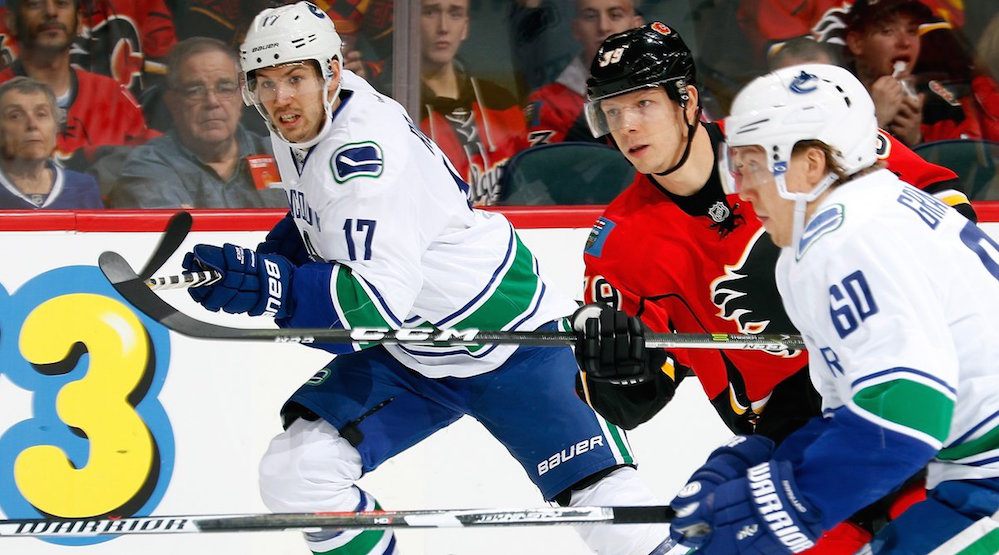 If all you wanted for Christmas is a win from the Vancouver Canucks, you’re out of luck.

After losing 4-1 to the Winnipeg Jets last night, the Canucks put up possibly their worst effort of the season tonight against the Calgary Flames.

When the final whistle blew after 60 minutes, the Canucks had mustered just 14 shots on Brian Elliott, their lowest shot total in a game this season. Unsurprisingly, the Canucks lost the game by a 4-1 score.

1. Tryamkin’s first of the year

This game was complete garbage from a Canucks standpoint, but let’s start with a positive.

Nikita Tryamkin has looked pretty good on the third pairing for the Canucks this season, but he’s not known for his offensive flair. Tonight he scored his first goal of the season, and he got a little help from the hockey gods to make it possible.

Tryamkin's second career @NHL goal, both against the Flames, in Calgary. pic.twitter.com/2mU7iWkc0w

It’s the second goal of Tryamkin’s 38-game career, with both tallies having come against the Flames.

It was a surprising goal, especially since the Canucks were heavily outmatched and outshot 16-5 in the first period.

Like all good things, the Canucks lead eventually came to an end when Flames captain Mark Giordano roofed one glove-side on Markstrom to tie the game.

With the game now tied in the second period, the Canucks had no jump in their step. Yes, they played last night in Vancouver, but the team looked beyond tired tonight.

Then, a Christmas gift came early for the Canucks, a power play and a chance to retake the lead, or at least record a shot on goal.

Canucks just registered their first shot on goal in over 16 minutes. Being outshot 24-6 on the game.

Not only did they not record a shot on the man advantage, they got no zone time, and actually surrendered a shorthanded goal, once again to Giordano.

The Canucks did finally manage a shot on goal a bit later on, but it didn’t go in. Then the Flames had one, and it did.

Mikael Backlund scored to extend the Flames lead to 3-1, and yes, that is Matthew Tkachuk tangling up with Alex Biega in front of the net to make that goal possible. Let’s move on to the third.

Surely after a terrible period like that, the Canucks would come back with some jump to start the third, right?

It took the Canucks over seven minutes to get their first shot of the period, which again did not go in. It’s almost like you need a lot of those things to get goals consistently. Weird.

On the bright side, the Canucks are averaging more goals per shot than the Flames

It was more of the same; the Canucks struggling to create offense while the Flames’ speed gave them fits. Of course, the game wouldn’t be complete without Tkachuk of all players icing it with the empty net goal.

The Canucks got rewarded with the lead early from a fluky goal they didn’t deserve, and still lost this game handily.

This isn’t against an NHL powerhouse either. This is the 18-16-2 Calgary Flames, a team that currently has Alex Chiasson in their top six.

I wonder if Jim Benning would say his team was “competitive” tonight.

The Sedins aren't the same without Hansen

These days, it seems like the Sedin twins need Jannik Hansen more than he needs them.

Okay, maybe not, it’s more like mutualism, but you get the point.

Hansen has one thing the Sedin twins desperately lack – speed.

It was evident they were lacking that element in their game tonight, as well as struggling to handle it from the opposition. With Hansen out, the Sedins skated with Loui Eriksson (though Chaput took some shifts with them later) and didn’t look dangerous whatsoever.

Sedin line's best chance was when Daniel was off after shot block and Baertschi had taken his place. That speed makes a diff. #canucks

The Flames are one of the fastest teams in the league and on the second night of a back-to-back, it was clear as day the Sedins had trouble keeping up with them.

With the Canucks on the second of back-to-backs tonight, the 36-year-old Sedins saw less ice time than usual (Daniel – 16:22, Henrik – 15:47). That means a bit more ice to go around, and one player eating up the minutes tonight was Bo Horvat.

He led all Canucks with 20:46, and only the first defence pairing of Troy Stecher and Chris Tanev had more on the team. His 3:50 of penalty kill time led all forwards in the game, and Horvat also saw over two minutes of power play time as well.

When your first NHL game is a tire fire but you don't want Mom to see you cry on TV pic.twitter.com/scJvsSU1C1

For Anton Rodin, the bright side of this being his first NHL game is it can only get better from here.

The 26-year-old rookie played just 7:18 tonight, and he didn’t seem to appear at all in the final ten minutes or so of the third after blocking a shot.

I had high hopes for Rodin after watching his preseason play, but if he’s always this fragile, he won’t be around long in the NHL.

Rodin’s debut may not have gone the way he’d hoped, but he did make for some interesting nidbits on Twitter on a night that was sorely lacking in entertainment value.

Rodin was drafted 7 years, 5 months & 26 days ago. No #Canucks draft pick has ever waited longer before making NHL debut.

I learned a couple things from this #Canucks game:
1. only way Sutter gets off PP1 is an extra long shift.
2. Rodin needs to drink milk

After games like this one, sometimes the only thing you can do is look back and laugh (or cry) at how bad it really was. Here’s some of the best from the Twittersphere tonight.

"And for the Canucks, that's one goal on, let's see…10 shots? That's all we got? Ten goddamn shots?" pic.twitter.com/La2PTzV5sh

Nearly done his sudoku, Brian Elliott has to put it down for a minute to make a good blocker save off Brandon Sutter, Vancouver's 10th shot.

The Canucks need a Christmas break, a Hanukkah break, a Kwanza break, a Guy Fawkes Day break, and an International Cat Day break.

Canucks looking like Walmart employees who have to work Christmas Eve

Merry Christmas and happy holidays to all, and here’s hoping for much more fulfilling Canucks games after the break.