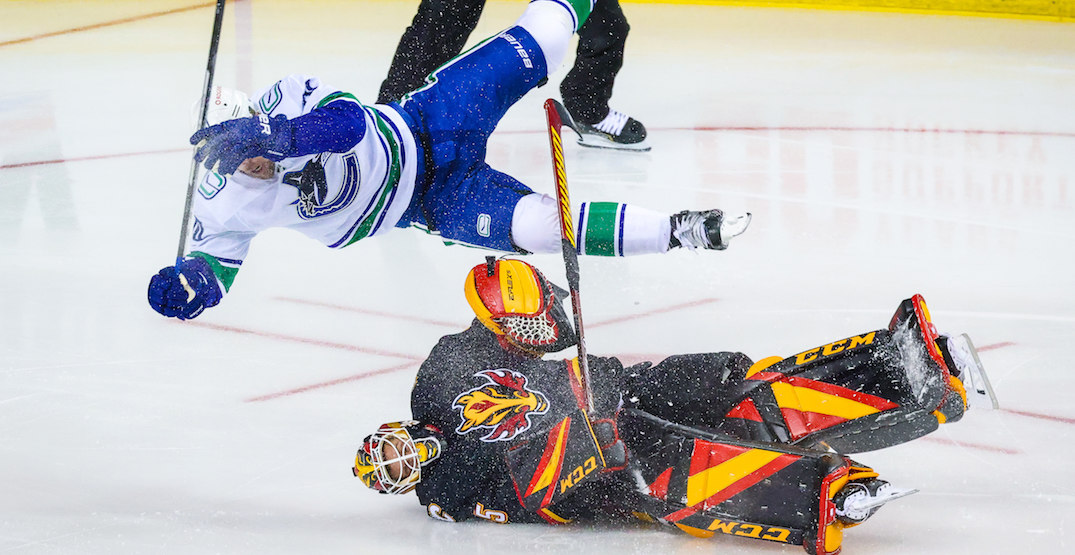 It’s not every game you get to see a big open-ice hit, never mind one that involves a goalie delivering it.

That was the case during Wednesday’s Canucks-Flames game in Calgary, which saw Jacob Markstrom charge out of his crease to break up a Tanner Pearson breakaway in the second period. Markstrom got to the puck just in time, sending Pearson flying in a spectacular collision.

Markstrom and Pearson were seen talking to each other afterwards, with the former Canucks goalie sporting a big grin on his face.

He wasn’t smiling for long though.

Minutes later, Markstrom charged out of his crease again, but this time Bo Horvat saw him coming, leading to the 2-0 goal.

Markstrom charges out again but this time Horvat sees it coming, gets around him and shoots it into the net to make it a 2-0 #Canucks lead pic.twitter.com/7CucOMWbq9

Markstrom told reporters after the game that he wasn’t happy with his decision-making.

“I had no business going out on either one of them,” said Markstrom. “You want to help the team win, stop pucks, not to give goals away like that. It’s obviously frustrating when you’re helping the other team instead of helping your own team.”

The Canucks won the game 5-1, but not before a tremendous amount of hilarity ensued on Twitter.

Got credit for it too pic.twitter.com/P2zpqO0W84

Hahahahhaha screw us once shame on you Marky, try and screw us twice!? Not today! Great goal Cap!! #Canucks pic.twitter.com/ZpMu1tpSaM

twitter user @ canucks hire me i made this https://t.co/VhFgLh7yae pic.twitter.com/2lHL5Uq47w

Always remember to cut down the angle, kids pic.twitter.com/c3gERHGARE

“Yup that’s me, Jacob Markstrom. You’re probably wondering how I got here” pic.twitter.com/T1aQHhuc0Z

goaltending 101 as per jacob markstrom pic.twitter.com/syTzfVVxi0

Some psychopath came charging at the Canucks’ private plane as they were leaving Calgary yelling “take me with you!” Luckily for them it was just Jacob Markstrom again.