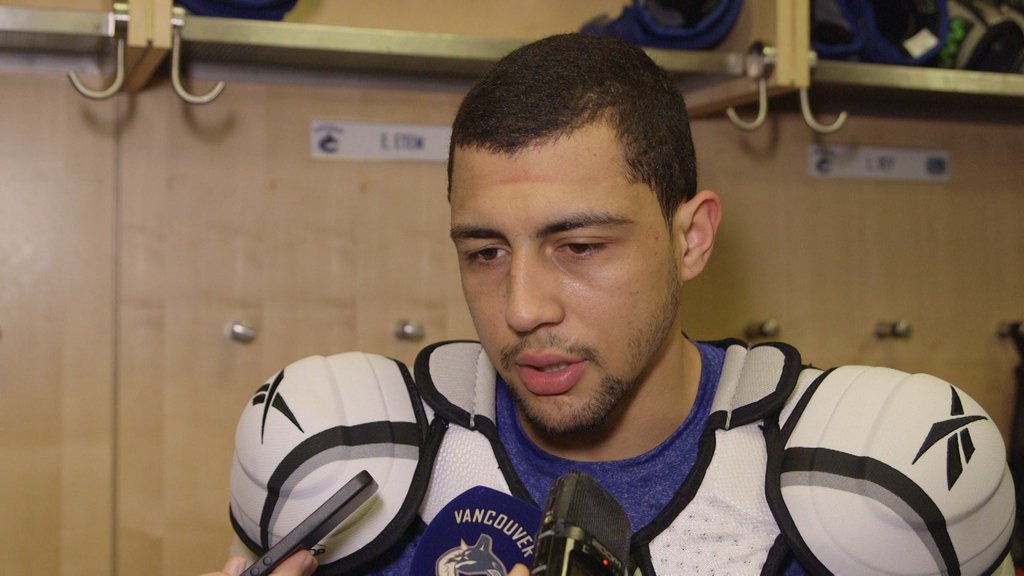 A day ahead of the start of the NHL season, the Canucks have made the final final cuts to their roster.

GM Jim Benning announced on Tuesday that forward Emerson Etem will be put on waivers, as Jack Skille has beat him out for the final forward spot.

“He got beat out of his spot,” Benning said following Canucks practice. “Other guys had better camps than him and deserved a spot.”

“We need to see speed on a more consistent basis.”

The team will get a contract worked out with Skille, who was on a tryout with the Canucks. Skille went through the same process with Colorado last year, winning a job out of training camp.

"Skille plays hard, big body, goes to the net hard. He plays left or right and brings it every night." – Desjardins

Vancouver’s other remaining PTO candidate, Tuomo Ruutu, has been released.

For Etem, the timing of this could not have been worse. His wife just gave birth last month, and it looks like he’ll be on the move. But such is life in the NHL.

Etem did not have a strong preseason. In four games, he was unable to find the scoresheet, and his play did not inspire many.

The native of Long Beach, California was acquired from the New York Rangers for Nicklas Jensen and a sixth round pick back in January. In 39 games with the Canucks, Etem scored 12 points (7-5-12), and looked at his best at the end, scoring five points (4-1-5) in the final five games.

While Skille didn’t find the scoresheet in his four preseason games either, he was more noticeable than Etem. Skille doesn’t have the speed of Etem, and at age 29 he’s five years older, but he does use his size more effectively.

“My goal was to work hard,” Skille said on Tuesday. “I know my game and how to be effective; I show experience through my play and that helps teams.”

If Etem clears waivers, he will be sent to Vancouver’s AHL affiliate in Utica. If he plays well there, we could see him up again with the Canucks this season.

Jack Skille speaks with the Vancouver media Tuesday after #Canucks delcared their intention to sign the free agent forward to a contract. pic.twitter.com/H7gufJlKRf