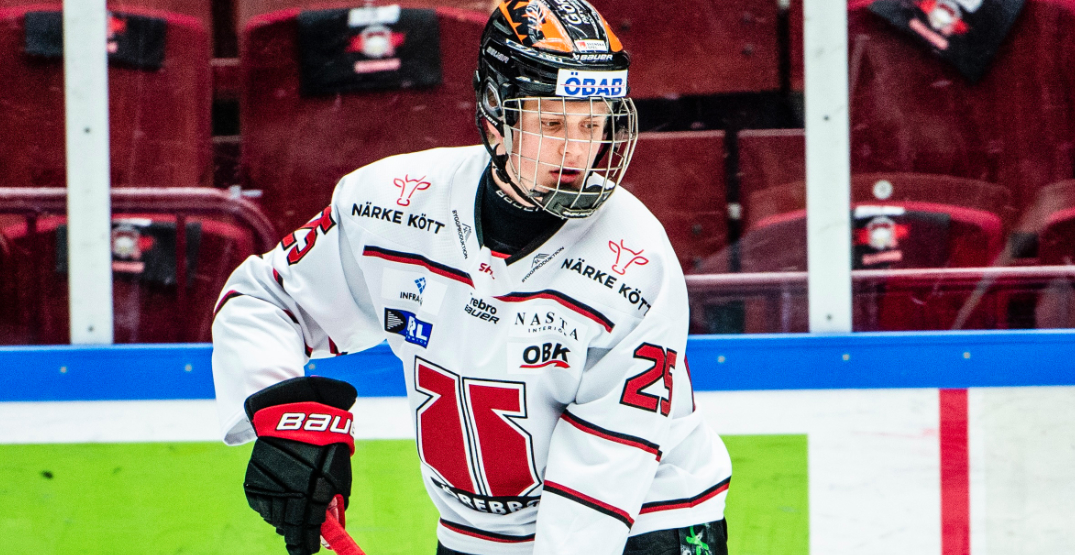 Although the finale of Stranger Things was weeks ago, the Vancouver Canucks are trying to add their own chapter.

In one of the weirder moments in NHL draft history, the Canucks selected Elias Pettersson at 80th overall in the 2022 NHL Draft.

No, not that Elias Pettersson.

Even Canucks’ staff member Ryan Biech had some fun with the pick on Twitter.

The Canucks third-round pick is a 6-2, 182-pound left-shot defenceman who spent the last season playing for  Örebro HK in Sweden.

He spent the earlier part of the season in the J20 circuit, but with a strong performance, he earned a recall to the SHL, Sweden’s top hockey league.

Pettersson played minutes (averaging 6:23 per game) but did sneak into 17 SHL games.

He returned to the J20 circuit later in the season for the playoffs and excelled with 10 points in six playoff games.

Scouting reports suggest that he has good mobility for his size. Here’s an excerpt from Dobber Prospects.

“Pettersson’s skating is the main foundation for his two-way game. He closes gaps well, approaches puck-carriers at optimal angles, and reacts quickly to changes of direction.

“While Pettersson has a solid frame at 6-foot-2 and 185 pounds, he doesn’t utilize his body as well as he could along the boards and in front of the net. This is usually a result of playing on larger ice, as physical contact isn’t as prominent, especially at the junior level.”

Since Pettersson shares an identical name to the Canucks star centre, it shouldn’t be a surprise that Vancouver is reportedly his favourite NHL team.

The Canucks just took D Elias Pettersson in round 3.

Agent Joakim Persson : We are sitting here and we can see the Canucks are picking soon. This is Elias's favourite team, it's a dream come true for him. He can not believe Vancouver selected him, he is so excited.

And, the newest Canucks shares something in common with fellow Canucks prospect, Jonathan Lekkerimäki.

That truly is a shocker…