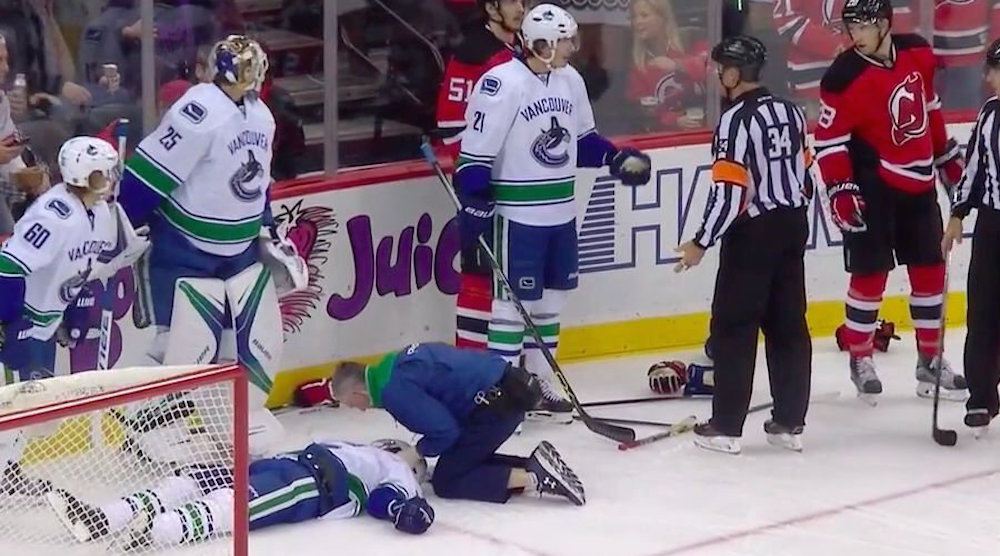 The Canucks lost 3-2 to the New Jersey Devils, but let’s cut right to the chase;

This game won’t be remembered for much except for Taylor Hall’s hit on Philip Larsen.

Let’s just jump right into this.

When I started watching the game, I was actually surprised by the heavy hits the New Jersey Devils were throwing.

Most of the time a Western team takes on an Eastern team, it’s a tepid affair.

Half the time you expect a tickle fight to break out, because both sides are on such good terms with each other. (Sedins would dominate a tickle fight by the way, imagine their tickle cycle game).

So yeah, when New Jersey was finishing their checks, I was a bit surprised. New Jersey has a long history of suckering you into a coma by putting a pillow over your face with defensive hockey, but a little spice to this matchup was a welcome change.

I assumed their coach wanted his team to have an identity. That blue collar work ethic you can sell to fans when your team lacks offence. 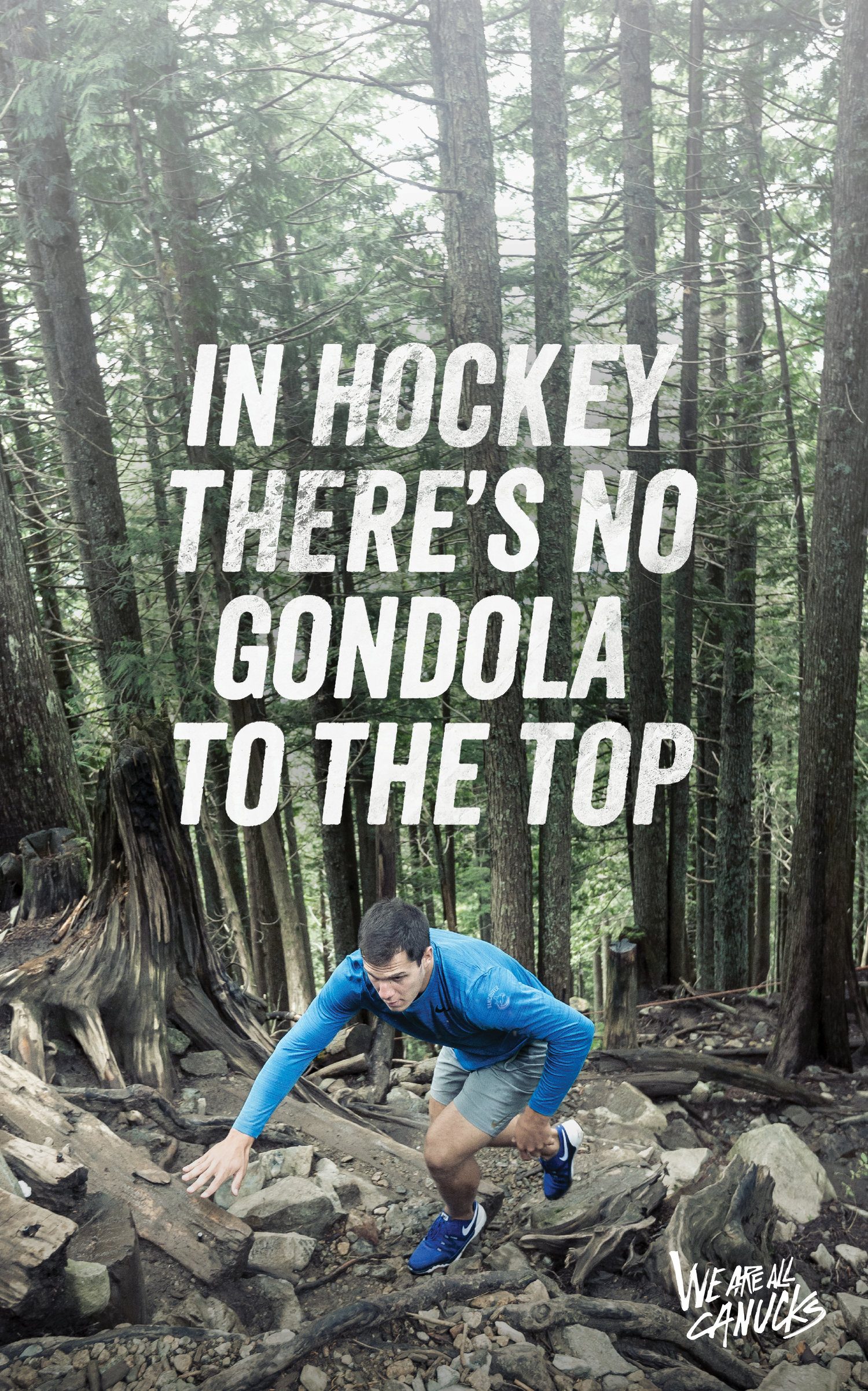 Anyways, the game was more physical than I thought it would be. Things escalated to the point where more heavy hits happened, and it ended at Taylor Hall running over Philip Larsen:

That was really hard to watch. So many sticks hit Larsen’s head. Skates as well. At one point a Devil literally jumps over Larsen to get into the scrum. Jumping, with blades on his feet, over an unconscious player. These are not smart decisions being made here.

It’s scary to think about the fact they could be causing further injury to Larsen, as well as the fact a skate could easily have cut him. He has no way of protecting himself.

So let’s break this one down into the talking points that were dominating social media.

Luca Sbisa skates right into Larsen’s head. I know his heart is in the right place, but there is a time and a place to seek revenge. This was not the place to do so. It’s actually kind of insane that the guy they’re seeking revenge for is an afterthought on the ice as they all run over him. It’s like wheeling someone into the ER who has been shot and the surgeon shoving them out of the way to go get revenge.

So yeah, seeking revenge became a hot button issue after this hit. Show anybody who doesn’t watch hockey and their responses were almost in majority “WTF is wrong with those people??”

Even hockey fans watching this hit had similar reactions. “WTF are they doing.”

Look, we all know hockey players are almost wired in today’s NHL to throw down after any big hit, legal or not. And hockey, it’s an emotional game. You see a teammate taken out like that, your blood can boil. You want to avenge your friend so you go all out to make sure it happens. Watch any beer league game and you will routinely see people lose their shit over the smallest of transgressions.

So I understand emotions can flare, and before you know it, two guys fighting for the honour of a friend turns into a dog pile of limbs and sticks.

But they have to be better about this. If you see a player fall to the ice, out cold, not moving, that is your number one priority. You want revenge? Go get it. After you make sure your teammate has been looked after. Priorities are important here, and a person’s health is much more important than getting revenge in his name.

Larsen was OUT on this hit. He was not moving. That is not the time to fight for honour. That is the time to wave for the trainer.

Good on Markstrom and Granlund for pushing the scrum away – protecting Larsen#Canucks pic.twitter.com/AJbhgIBwoq

Markstrom is a god damn  hero for knowing right away that Larsen needed to be shielded. That was Markstrom’s best save of the night. Kudos to Granlund for getting in their to shield Larsen as best he could as well.

It was a scary hit and the follow up was frightening, but luckily for all involved Larsen appears to be ok.

But you never want to see this situation happen again.

Thankfully there was good news about Larsen:

Larsen was coherent, alert and had full movement before being taken to hospital for observation. #canucks

One day Sbisa skating into an unconscious Larsen will become part of Canucks meme lore (assuming Larsen is ok and a year has passed and people are allowed to make fun of it) but man alive, I hope people remember this could have gone so much worse. I hope players use this as a wake up call.

"We played well, but didn't have enough in the end. The game changed after the hit, it's tough to see a teammate go down like that" – Henrik

Also, yes, the Canucks were clearly rattled by the hit. Gudbranson was gunning for revenge and took a penalty. The Devils scored on that power play. Took the Canucks the intermission to find their game again.

Coach Willie has been dying to get his fourth line more minutes, to the point where he will actually tell Bo Horvat “No, you shouldn’t be playing as much because we really need that fourth line to get its minutes.”

There is some merit to be had in the idea that not gassing your top players will help you in the long run. The other end of the spectrum is that Horvat is young, you can afford to ride him at times. Especially if winning is what you’re trying to do.

Hell, the fourth line even had a shift in the third period where they ran circles around the Devils. Hemmed them in their own zone. Coach Willie’s mustache twitching in ecstasy.

They didn’t score or get a lot of shots on net, but it at least tired out some Devils players. That shift alone probably powered them to being three of the better Corsi players on the night.

*Brendan Gaunce fighting*
WILLIE: who the hell is that

Brendan Gaunce had his first fight in the NHL and found out the joy of what happens when you punch the other guy way more than he punches you; he takes a cheap shot on the ground to make himself feel better.

Gaunce has been a Milford Man this year. You never really see him do much. True, he has limited time on that fourth line, but it’s not often you watch a shift and go “My god, Gaunce, that was a damn fine shift!”

The highlight of the season for Gaunce for me was an intermission segment with Hannah Bernard (Riding in Cars). Just as it’s ending Hannah goes “Well we’ve arrived safely” and Gaunce quietly says “Not yet…” which I mean, obviously he’s just trying to have a back and forth, and he’s super serious enough to just trying to inform her “Actually we’re not fully in park yet” but it comes across as super serial killer-esque.

Anyways, hopefully we see more from Gaunce, but this season he’s still a mystery to me of what kind of player the Canucks actually have on their hands.

This was in response to this hit:

This was before the Taylor Hall hit on Larsen. This was part of the escalation that led to the big hit.

Chaput leans on Zajac, gives a small shove, and Zajac can’t get his arms up in time and cracks his nose on the glass/his visor, and like a scene out of NHL ’93 blood starts hitting the ice.

So yeah, the game was primed for “You wanna play that way, that’s cool. I see how it is now.” chicanery.

Think I've seen enough of Sutter with the Sedins.

Brandon Sutter must have friends in low places because he finally dropped from the first line halfway through the game.

You see, because Garth Brooks is his goal song and….

The point is, Sutter finally, finally got removed from the Twins’ line. The Sedins happened to get two goals this game.

One was on the power play (Sutter was there):

And one was even strength, playing with Eriksson:

The decision to play the Twins with Sutter has been criticized by stats guys, and eye guys (and stats girls and eye girls). You get uncomfortable watching them play. Kind of like when a nude scene comes on in a movie you’re watching with your parents.

Neither the Sedins nor Sutter seem to bring out the best in each other.

And tonight, even after the split, the Sedins were bottom of the barrel in Corsi. So maybe it’s a sign they’re getting older that they can’t carry a player to the heights of Anson Carter.

Or maybe it truly just a bad fit. And if the Canucks play with Eriksson (or Hansen) things will turn around for the Sedins more.

The hit tonight reminded me a lot of Todd Bertuzzi’s hit on Bryce Salvador in the 2003 playoffs:

Which Bryce himself even weighed in on:

So will I!!! One of the hardest hits I took my whole career! https://t.co/XRj4uQX5u2

Canucks fan has spent the last 15 minutes taking selfies of himself at the game. @UncleChaps @NJDevils pic.twitter.com/8r6dJT9vBY

When’s the last time New Jersey put anything worth watching on the ice??

OH YOU JUST GOT SERVED.

@TheStanchion Im at the game. Everytime Cory handles the puck, Devils fans yell in unison "Cory noooooooo!". At least they are knowledgable.