If you hoped for more dominance Sunday after Saturday’s win over the Hawks, you’re probably a little upset.

By the result on the scoreboard, at least.

Vancouver lost 3-2 to New Jersey, but you should know they dominated most of the game. Check out the possession chart from hockeystats.ca: 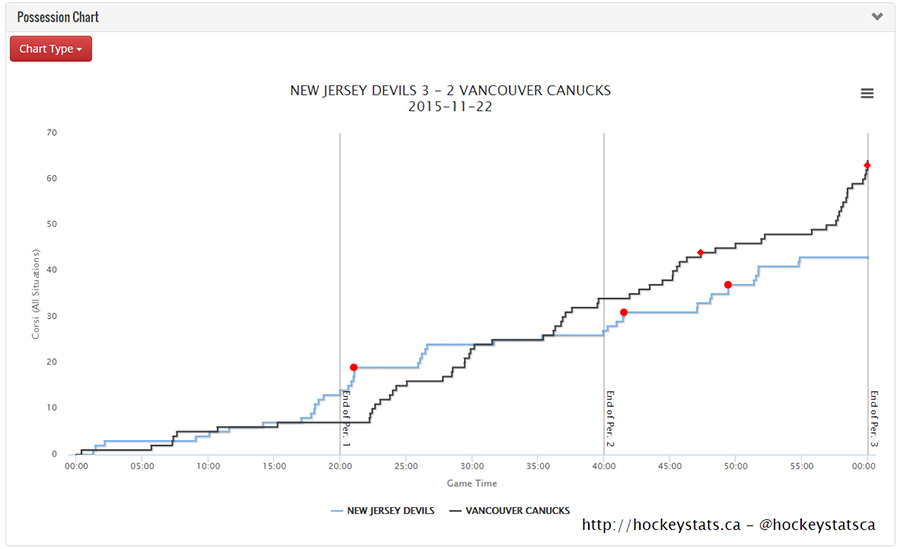 If that’s not clear enough, shots were 32-13 Canucks in the second and third periods, and corsis were 57-29.

Vancouver dominated everything but New Jersey’s net, which was so unfortunately guarded by a guy named Cory Schneider.

Judging from his game, he’s heard of the Sedins. They were on for the second night in a row, but they only broke through once. It was as if he’d seen that slap-pass before.

So here we sit, dissecting another one goal loss, which are starting to feel kind of comforting now.

1. Dissension within the twins’ ranks

OK, using the word “dissension” might be a bit strong, but it was interesting to see the Sedins mildly disagreeing on the recent play of the Canucks after the game against the Hawks.

Daniel, on the other hand – all roses: “Halfway through the road trip we started to play a little bit better. We didn’t see any results but we stuck with it and tonight we showed how good we could be if we play the right way.”

Of course Henrik did put a positive spin on it, as any Sedin will do: “We’re in the playoff hunt and we still haven’t played our best, so that’s good.”

1. I guess they don’t share a brain after all.

3. When did Hank become such a realist?

Hank’s right, though. Take out the power plays and the Canucks were outplayed in every period against Chicago, with the ES Corsi at 51-36 by the end of the game. They won because of a couple timely goals by the Sedins as the third period ended.

Back to New Jersey – as I mentioned above, the Sedins were great on the power play, though they didn’t score. Twenty-one of Vancouver’s 38 shots came with the man advantage, and most of those were from the first unit.

After the game, Sportsnet’s Louie DeBrusk said perhaps the Canucks were guilty of “overpassing” instead of just getting pucks on the net.

Makes sense – get more pucks towards the net, tip a few, score some dirty goals – but let’s not forget why the power play’s been so bad lately. It’s been one dimensional, they’ve been making slow, easy-to-read passes, and they’ve been lining up point shots that you see coming a mile away.

Against the Devils, the Sedins were in all-out offensive mode. Daniel Sedin had at least two slap-pass-shots, and they were completely dominating New Jersey in the last three minutes as they tried to equalize the game.

In the end, each had only one point, but they would’ve had another massive night if not for the goalie.

2. Dorsett’s rep won’t get any calls

Do you have a little brother or sister? Ever get told to go to your room or worse because your mom or dad ran into the room and saw him/her crying even though you did nothing wrong?

Anyone with a sibling knows this feeling. So does Derek Dorsett.

Somehow, Dorsett got a penalty for standing still as Farnham skated at him and fell over trying to hit him.

Bobby Farnham – the same guy who fought Jake Virtanen and acted like he’d taken down GSP – ran into Dorsett and fell on his butt, which is probably when the ref looked over and decided Dorsett must be at fault.

Here’s an excerpt from rule 56.1 from the NHL rulebook:

A player is allowed the ice he is standing on (body position) and is not required to move in order to let an opponent proceed.

It shouldn’t have been a penalty, but Dorsett’s not going to get the benefit of the doubt any time soon.

You probably haven’t forgotten the fallout from the New Jersey game a couple weeks ago – Jordin Tootoo’s accusations that Burrows made “classless and unacceptable”comments about his personal life and family.

Burrows denied saying anything about Tootoo’s heritage, and although he did visit the NHL head office about the incident, Jim Benning said on the radio the meeting was only to remind him of all the microphones around NHL rinks and to be careful about what he says.

If you’re like me, you couldn’t wait to hear what Tootoo would say about Burrows when they met two weeks later.

“I get trashtalking. Obviously there’s a line not to be crossed. Trust me, trash talk has always been a part of the game. You just don’t dive into stuff like that…

“I’m very happy in my own skin, and proud of where I am today… it’s unfortunate that it’s gotta go that far…

“People around us heard what he said. He knows exactly what he said… He’s the one who has to not go to bed at night with ease, unless that’s the kind of person he is and he’s ok with that.”

Tootoo stuck to his story and didn’t back down.

You can watch the video here:

4. Hirsch begs for the two-pad stack

Miller didn’t escape Twitter criticism for this strange attempt at a save against the Hawks:

Miller did step up after that goal and play well for the rest of the game, btw.

A day later, Markstrom didn’t look any better on this.

Don’t know what Markstrom was trying to do here, but that’s not the butterfly-style, cover the bottom of the net stuff we’re expecting to see from him.

Why not? I’m no goalie expert but I’m sure it’s harder to recover from a two-pad stack – jumping back to your feet to make the next save – than it is from the modern butterfly position.

The Devils scored two third-period goals on Markstrom. While both were screened, and the first was tipped, Hirsch had stepped up his commentator game saying Markstrom was too deep in his crease and should’ve been challenging more.

Exhibit A of Struggling Canucks:

Radim Vrbata came into Sunday’s game with a shooting percentage of 4.05. He had three goals on the season.

Vrbata, talking with Jon Abbott before the game: “I think I’m getting even better chances than last year. Last year they were going in…

“The only difference is last year I found a way to score on those chances and this year I’m finding a way not to.”

Vrbata very nearly had another one of those nights, taking lots of shots and seeing none of them go in the net, but with one second on the clock, he finally beat goalie.

Could it be the start of something?

Exhibit B of Struggling Canucks:

Bo Horvat has 2 goals and 6 assists so far, but on Sunday, he was doing everything he could to end the struggling talk.

Late in the third, he had the second of two amazing dangle moves he pulled during the game, and if Burr had scored, this would’ve been winning 1 v. 1 for weeks.

What a move and pass by Bo Horvat, but what an even better save by Cory Schneider pic.twitter.com/SIcrmNHGqm

Another look at this ridiculous move by Bo Horvat, and big save by Schneider #Canucks #NJDevils #Devils #Vancouver pic.twitter.com/WH815uXiWn

So Horvat’s still got it.

Burr on the other hand… old Burr pulls a quick move and roofs that puck, doesn’t he?

I’d never heard of a fanboni before this, had you?

TBH, even after seeing our sports editor riding around on one, I still don’t know what it is or what the point of it is.

I guess it’s a travelling pipe organ… which is something I didn’t realize the world needed.

But hey, I can think of a lot of things the world doesn’t need, like Crocs, salad, and the Big Bang Theory.

Good too see our sports editor living it up, anyway.