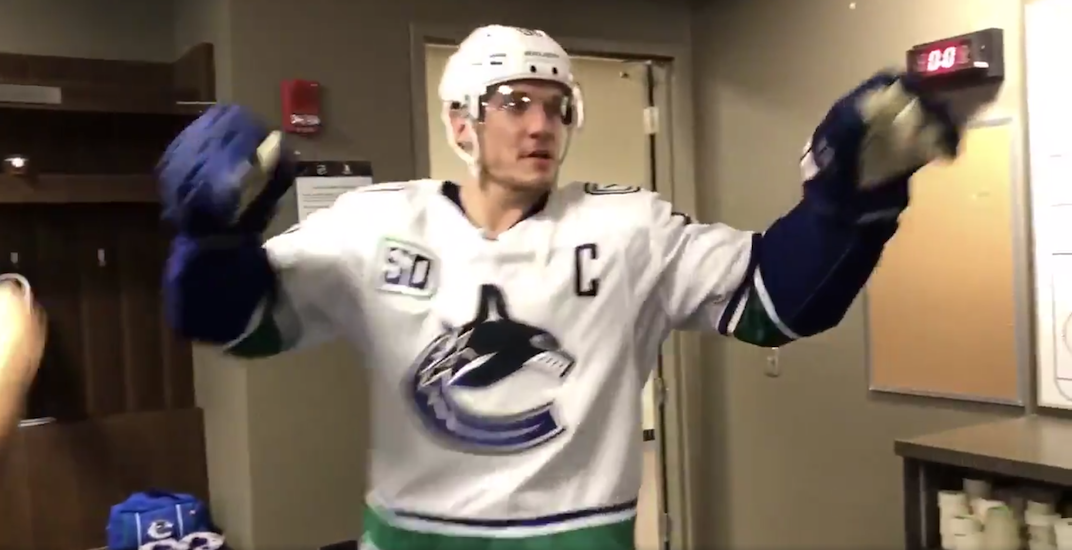 The Vancouver Canucks 50th anniversary season appears to be the year of the zombie.

Not only does the team play an epic zombie video for fans pre-game, the players now celebrate victories with an unusual post-game locker room song. While most teams might prefer the latest hip hop or pop song, the Canucks have adopted a song that debuted 25 years ago.

When the Canucks win, they rock out to the song “Zombie” by The Cranberries.

“I have no clue how that came about,” Jay Beagle told Daily Hive after practice on Friday. “I think it was played one time, and all the young guys who had never heard it, loved it.”

The late Dolores O’Riordan wrote the song as protest to the 1993 IRA bombing in Warrington, England. The song debuted on September 19, 1994 — before 10 current Canucks players were even born.

“It was at our Halloween team party,” Brock Boeser explained. “Everyone was singing and dancing to it. They just made it our win song after that.”

The Canucks culprit that first introduced Zombie to his teammates remains shrouded in mystery — though Brandon Sutter, Chris Tanev, and JT Miller appear to be the leading candidates.

“It is really weird, but we like it…”#Canucks discuss their win song, Zombie by @The_Cranberries, which played earlier today after a W in Washington. 🔊🎉 pic.twitter.com/iRYoQFkz7b

“I love the song Zombie,” Tyler Myers revealed. “I’m happy with that one. I’m going to stick with the one we have.”

But Boeser has another idea.

“We’ve played Shania Twain a few times after wins,” Boeser explained. “I’m a big Shania fan. I like those types of songs.”

The ability to have a song that builds camaraderie can go a long way over the course of a season. The St Louis Blues played “Gloria” by Laura Branigan all the way to the franchise’s first Stanley Cup championship last season.

Reliving absolute JOY of that FIRST @StLouisBlues Stanley Cup Final WIN at home in Game 4 on June 3…& GLORIA!! What a THRILL it was to be a part of the ENERGY at ⁦@Enterprise_Cntr⁩ that evening & hearing us Blues fans singing along! ~ Kathy, Other Half Ent. #PlayGloria pic.twitter.com/6VItyiMsxo

While the Stanley Cup might too lofty of a goal for this season, can Zombie propel the Canucks forward a bit like Gloria did for St. Louis?

“I think it could, yeah,” Myers said. “I think them winning is really what took the song to another level. You’ve just got to try and keep winning, and see if we can do some damage towards the end of the year, and get in the playoffs. If we do that, Zombie might become pretty popular.”

Whether it’s The Cranberries or Shania Twain, having a song that players can look forward to singing and dancing to after wins helps build team spirit.

“I think every team hopes they can find that song each year, to rally behind everyone,” Boeser said. “I think with St Louis, the fans knew about it, and that helped.”