Not long ago a game against the Coyotes was a boring night against a lesser team, usually ending in two points for the good guys.

Back then, Arizona (slash Phoenix) wasn’t even in Vancouver’s division so it didn’t have the same implications.

Basically, everything’s changed. Monday’s game was massive for the Canucks, as you can see from the standings prior to the game. 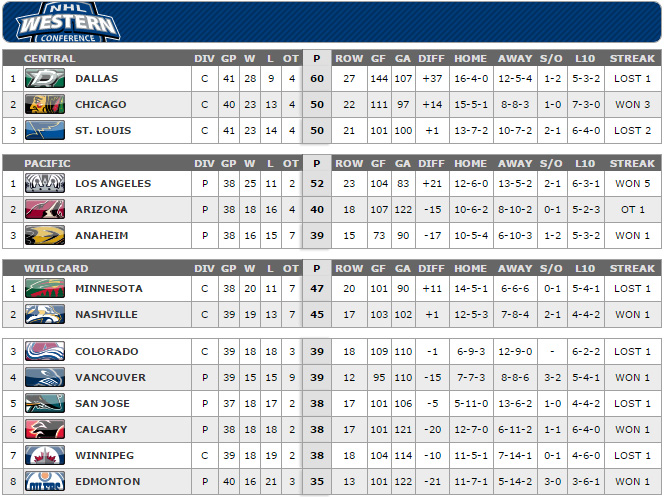 Tied with Anaheim and one point down on Arizona, Vancouver needed the points to take back that playoff spot.

Though Vancouver lost 3-2, you can’t say they didn’t try. After (FINALLY) winning a coach’s challenge that stopped Arizona going up 4-1 five minutes into the third, Daniel Sedin scored, bringing them within one. They fought hard for the rest of the game, and a goal felt inevitable.

Unfortunately, the inevitable occurred. They didn’t score and they lost 3-2 in regulation.

I’m quite sure 95% of hockey fans have accepted the Sedins are strong, tough hockey players. I was in Chicago last year watching the Canucks game from the stands, and after chirping me quite a bit, one kid yelled “I actually like the Sedins.”

That five percent who haven’t accepted it – they’re trolls, and they love getting Canucks fans worked up.

And any time a Sedin shows he’s tough, Canucks fans get in “I told you so” mode.

Remember Steve Nash playing through a broken, bloody nose against the Lakers in the playoffs? Daniel did his own version Monday. After having his front teeth knocked out and having a mouth full of blood, this was his face. 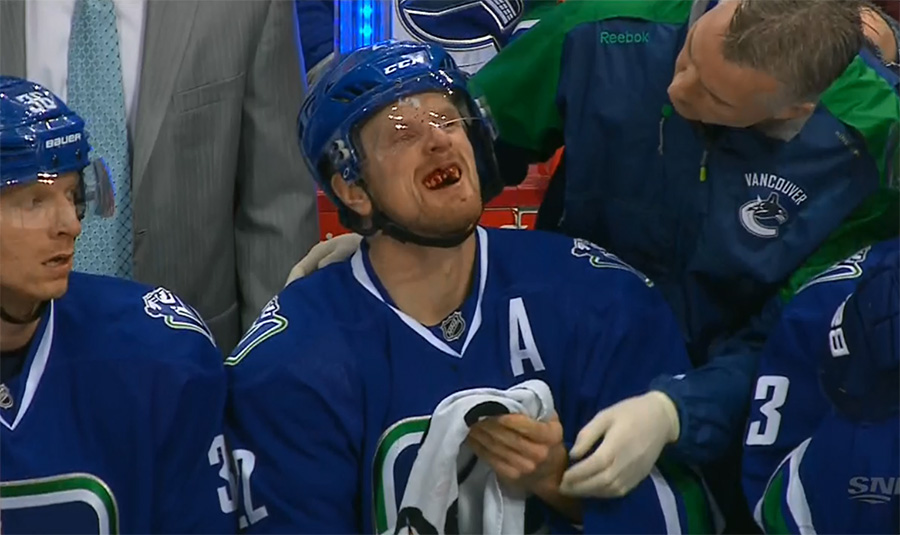 Judging by Hansen’s face, I can only guess the trainer gave Hansen a look saying “Don’t react. Don’t let him realize how f-ed his face is. He might freak out.”

After a quick repair job in Vancouver’s locker room Daniel was right back out there.

Update on Daniel Sedin: He cracked the bridge in his mouth and lost some teeth that he had previously replaced.

With similar determination the tweeters did their thing.

Daniel Sedin back on bench; tell me again how soft the Sedins are

Justin saw some humour in it.

The story got better when Daniel scored a goal in the third period.

Hell of a show from Daniel. The only person not overly impressed? Henrik.

#Canucks Henrik Sedin says brother Daniel 3 or 4 teeth. “Losing a few teeth is not a big deal. That shouldn’t stop you from playing.”

While it might look like he’s just trying to keep his twin in check here, this quote shouldn’t be ignored. Whatever injury Hank’s dealing with right now, it must be a lot worse than a few broken teeth.

2. Markstrom… We saw this coming

Ryan Miller was practicing with Rollie Melanson Monday, meaning he may be close to returning for the Canucks. I asked the question.

Does this excite or worry #Canucks fans? https://t.co/61CpUhxVXJ

@omarcanuck gotcha. Thought to gauge from words. It feels like last year with Lack. Markstrom has earned right to start still

Always90Four made a good point – it feels like last year all over again. Miller’s injured, the backup is outplaying the starter (Markstrom – .919 SV % vs. Miller .909 SV %), and Miller’s on the mend and ready to take back his starter’s job.

Don’t be too upset, though. If you are, it’s your own fault for not seeing this coming the second Eddie Lack was traded and Miller retained.

Anyway, Markstrom did his thing again. This angle doesn’t show how exceptional Markstrom was reaching back to rob Shane Doan in the 2nd.

That’s the kind of remarkable goaltending that gets goalies shipped out of Vancouver.

Luckily for Marky he let three past by the end of the night… so he wouldn’t upstage Miller too much, I assume.

If not for Daniel Sedin’s bloody-mouthed goal, Bo Horvat’s might have been the story. He finally scored after not managing in over two months.

Nice battle from him on the power play too.

The very next shift, Yannick Weber… I’ll let the gif tell the story. He comes in to pinch at the bottom of the screen.

Not only did he give the puck away in the offensive zone, after getting back Weber falls when trying to stop in front of his net.

Had he not given away the puck? No goal. Had he stopped in front of the net and got his stick on Dauphin’s? No goal.

But Weber’s as strong a supporter of #TeamTank as you’ll find on the Canucks these days. Again, why is Pedan not playing?

4. Who dressed up as Cracknell?

Turns out Cracknell has Sedin-type skill once every 40 games or so.

That or Hank realized the only way he’s getting any extra shifts under Willie is by switching back and forth between his and Cracknell’s jerseys.

Wonder if Cracknell did it willingly or he’s tied up somewhere in the bowels of Rogers Arena.

It was already beyond reason that the Canucks signed Sutter to a big-money, long-term extension, including a modified no-movement clause, despite Sutter having a year left on his contract and not having played one game for the Canucks yet. Seriously, what were the chances Sutter’s bargaining position would improve over the season?

But signing a potentially injured Sutter to that massive extension?

That would be like not trading the older, higher-paid, injury prone goalie when you had that option.

6. Going all in on Virtanen

Watching Canada’s quarter final Saturday and following the game on Twitter, you’d have to be dreaming to think Jake Virtanen could possibly escape heavy criticism.

Personally, I expected it to come in heavy from Toronto and elsewhere in Canada. I was preparing for headlines, sports-page covers and whatever else.

What I didn’t foresee was the worst roasting (and it wasn’t close) coming from the Province – Vancouver’s own paper. By now you’ve probably seen Sunday’s back cover and had your own reaction. If not, here it is. 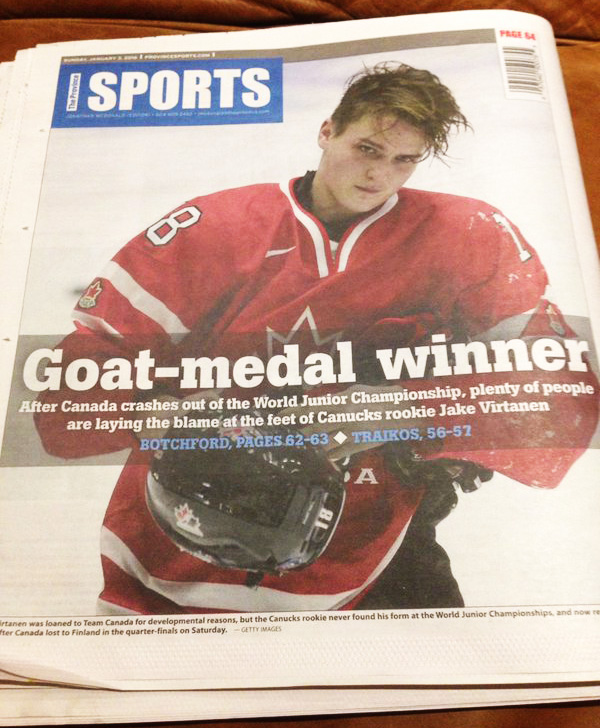 Before I proceed, let’s be honest for a second. Virtanen didn’t play well, and his lack of control in the game played a major role in the loss. And he was supposed to be an offensive leader for the team.

But that’s it – players have bad games and bad stretches. Mackenzie Blackwood (Canada’s goaltender) sure didn’t do much better.

The point I’m trying to make is criticism is fair. Botch’s article was fair, and even positive. But calling Virtanen the “Goat Medal Winner” on the sports cover of the local paper?

Not fair. Too far. Way over the top.

That’s the kind of stuff that made Roberto Luongo, the best goalie Vancouver ever had, want to leave the city. 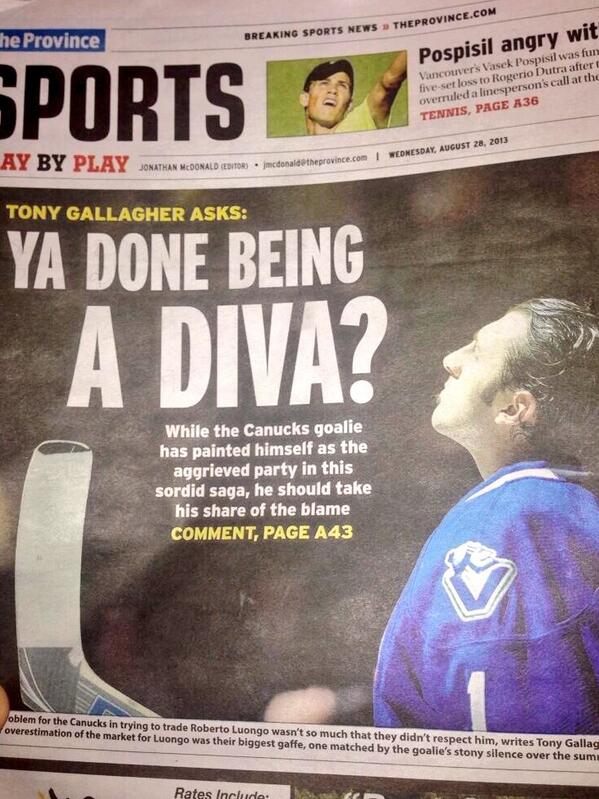 The difference: at least Luongo was one of the Canucks’ highest paid players and he had more than a few years to get used to the Canadian media.

“We are better than this as a country,” he added.

Alex Burrows chimed in on how Virtanen was being portrayed on TSN 1040 Monday:

“It was totally unfair and a little crazy people are blaming the loss on (Virtanen). I watched Team Canada during the tournament and I felt they were undisciplined throughout their lineup, their special teams weren’t great, it seemed their chemistry wasn’t (as good) as it’s been in previous years…

Asked if Virtanen could gain some confidence from going back to Junior, Burrows:

“The game’s a lot different in Junior. You’re not going to be able to manage the way he conducts himself off the ice, the way he practices, his workouts, that he’s going to be riding buses for long times, so I think even if he doesn’t play every game in the NHL, he’s still around the guys, he can look at the Sedins every day, see the way they work, they way they act, the way they conduct themselves.”

Burrows read Botch’s article on Virtanen, apparently, where Benning said stuff like this about Virtanen.

Benning maintained the message, speaking to Dan Murphy in the first intermission, saying he’d prefer to keep Virtanen with the Canucks so the team can monitor him, but management will make a decision on him this week.

NOTE: after reading Botch’s the Provies from Monday, I have a better idea of the paper’s intention with the headline. Poor execucution? Definitely. And Botch says as much.

Oh well, no point getting all worked up about the Canucks this year. Maybe fans should treat them like the NHL treats the All Star Game… if it grabs your interest for a few hours, it’s done its job.

Shane Doan spoke on TSN 1040 about his teammate John Scott being voted captain of the Pacific team Monday.

“I am so happy for him. We’ve all talked to him about it. He’s got a great personality, he’s having fun with it and enjoying it. It’s funny because the entire league is eligible to play in the All Star Game.

“He led stretch the other day and he’s letting everyone know he’s captain of the All Star Team.”

See Canucks fans? You can be lighthearted like John Scott and Shane Doan, or a grump like Steve Simmons. Up to you!

If John Scott has a shred of dignity, he will thank fans for their support and immediately resign as NHL all star and captain.