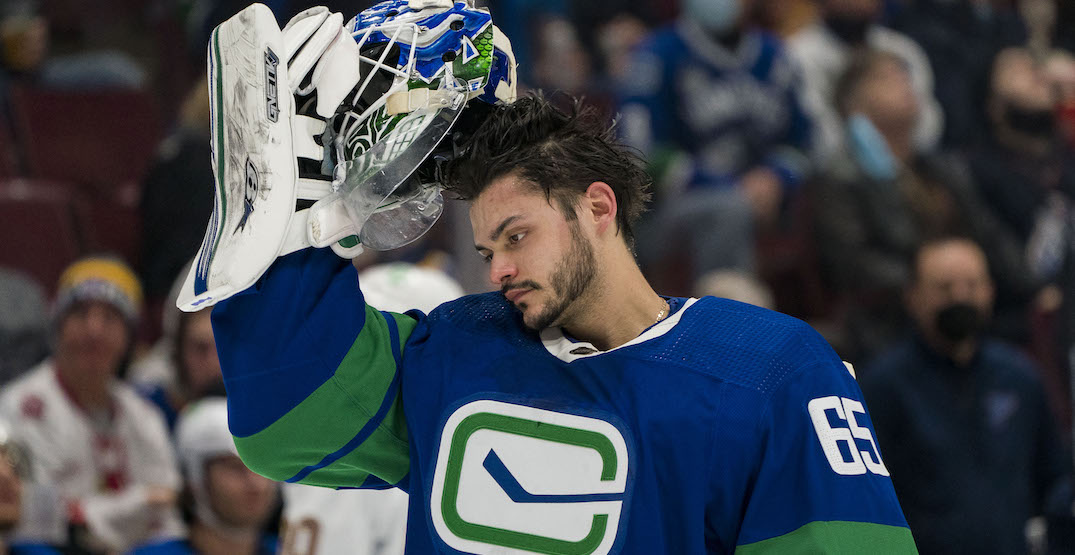 Michael DiPietro’s days with the Vancouver Canucks could soon be numbered.

The 23-year-old goaltending prospect is drawing interest from the Montreal Canadiens, according to a report from CHEK’s Rick Dhaliwal, who indicated the Canucks may be looking to get him a “fresh start” as soon as next week.

“Mike DiPietro, it’s time for a change. He needs a fresh start, he’s got to get out of here. He’s falling behind Arturs Silovs,” Dhaliwal said on Wednesday’s edition of Donnie and Dhali. “Someone told me this morning the Habs may have interest. I think the Canucks are hopefully going to get him moved by… next week.”

DiPietro was a Memorial Cup winner before the Canucks drafted him in the third round, 64th overall, in 2017. The Windsor, Ontario native starred for Canada at the World Juniors when it was held in Vancouver, but his transition to pro hockey hasn’t been smooth.

The six-foot netminder was forced to start an NHL game before he was ready at age 19. He was ventilated for seven goals by the San Jose Sharks in his NHL debut on February 11, 2019, in a game that was more embarrassing for Canucks GM Jim Benning, who ran out of professional goalies.

The Canucks mismanaged DiPietro during the 2020-21 season, as he spent most of it on the team’s taxi squad as pandemic insurance. After going 415 days without playing, DiPietro appeared in just four games with the Comets to end the season.

Instead of DiPietro backing up Thatcher Demko in Vancouver next season, it’ll be Martin. Dhaliwal has said previously that the Canucks may be interested in acquiring a veteran AHL netminder, perhaps to play with Silovs, a sixth-round pick in 2019 who’s only 21 years old.

“We’re really excited for Elias next year. I think he’s going to come in for the first time in a while completely healthy,” said Barry. “We saw what he could be like when he was healthy. He’s ready to get off to a great start.”

Coming back from a wrist injury, Pettersson had an awful first three months with the Canucks last season, scoring just 17 points in 37 games.

He caught fire the rest of the way, though, with 51 points in his final 44 games.

“I think there was a tough transition coming back from that injury,” Barry added. “I don’t think he wanted to talk about it that much, but it was a tough injury, just to handle the puck the way he really wanted to. And then he had to get some comfort level with his linemates again. That’s part of it, is just finding that mix. I think it was a combination of both, really. Like, him getting his fitness back, his hands back, and just getting a fit with his linemates.”

Does Brock Boeser have a future in Vancouver?

The 25-year-old winger is due a $7.5 million qualifying offer this offseason and it remains to be seen what the Canucks will do with him.

Talk between Canucks management and Boeser has been “pretty quiet,” according to The Fourth Period’s Irfaan Gaffar, who adds that he believes other teams have shown interest.

With just over a week left before the draft and just over a week until July 11th talks between the Canucks and Boeser camp have been pretty quiet. Believe there has been some interest from other teams on Brock. QO is $7.5 mill. Let’s see what happens here.

After months of speculation, will the Canucks finally trade J.T. Miller?

It was admittedly speculation from Darren Dreger, but the NHL insider believes the level of interest in Miller will result in a trade the Canucks “can’t refuse.”

"I believe, this is my speculation, that VAN is going to get an offer on JT Miller they just simply can't refuse…there is no shortage of interest…maybe on the draft floor? Probably." #Canucks @duerperformance

Miller scored 99 points last year but turns 30 years old next season. It seems unlikely that the team and player will be able to agree to a deal that works for both parties, given where the Canucks are in their trajectory.