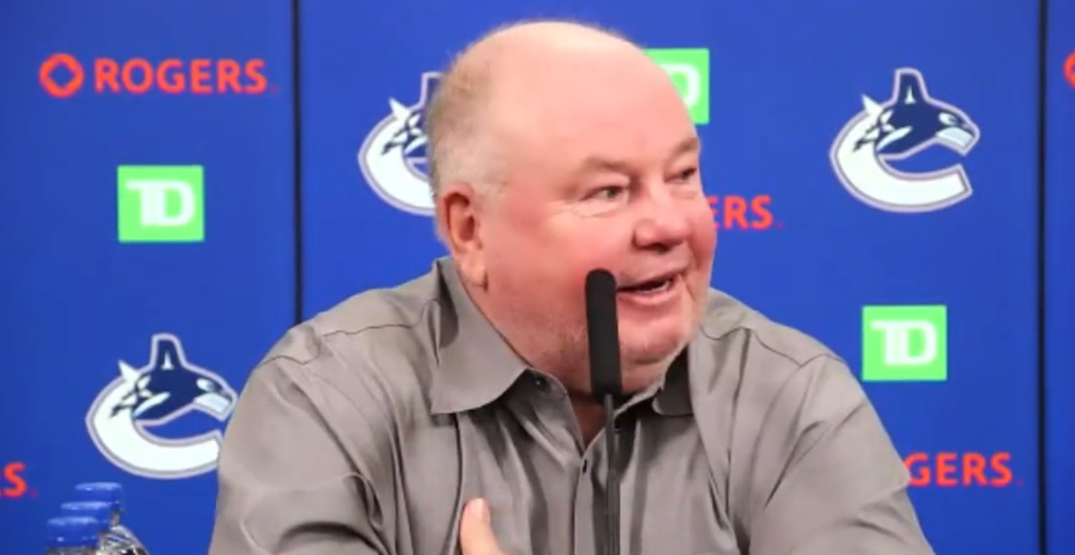 For many years, the Vancouver Canucks weren’t exactly known for being a forerunner when it came to hockey analytics.

Former GM Jim Benning was widely cast as “anti-analytics”, with several roster moves and public quotes indicating such. Benning eventually seemed to come at least partially around on the idea but was eventually shown the door in late 2021.

In a recent appearance on the Bob McCown podcast featuring the title host as well as John Shannon, Canucks coach Bruce Boudreau described his relationship with the analytics staff.

“I started talking to our analytic guy in Vancouver a lot more last year, and I plan to do it more this year,” Boudreau said. “Just [to see] if there’s things that I’m missing, I hope I’m not missing things…  but I get all the analytic numbers, and the ones that I think that are important, I really, I really stressed the ones that I don’t think are that important, I try to sit there and say, ‘other things are more important to me.'”

Boudreau admitted that analytics weren’t always apart of his coaching style until they were introduced to him by former Washington Capitals GM George McPhee.

“I’m getting better at it and learning. But usually, when you use analytics, it just, it sort of proves what you see,” Boudreau said. “But some of it is really important. The high danger chances, what you’re giving up… really important.”

Here’s the rest of Boudreau’s answer:
“Too much analytics is not good for ya, but the proper analytics are really good.” pic.twitter.com/guh6I5KF8M

Boudreau also shared his qualm with analytics models: the lack of player specificity when it comes to how some team statistics are calculated.

“But you still got to understand that, they give you say, last night’s game, Florida and Tampa and the difference of high danger chances,” Boudreau said. “Well, what analytics don’t show is who had the chance. You know, if Ryan Lomberg for Florida has the chance from the high danger area, they give it the same value as [Alex] Barkov. Somehow you got to read those things and say, okay, really, is that a high danger chance or not?”

Boudureau’s beef seems to only have partial merit. Sure, a straight scoring chance total won’t give you a full picture of what a team’s offensive or defensive performance looked like.

But it’s not hard to filter out on most analytics sites which player contributes each individual scoring chance, nor does it take too long to check the data for a more nuanced approach.

For example, here’s a clear representation of Connor McDavid’s dominance in the expected goal department from last night’s Game 2 victory over Calgary, via MoneyPuck.com:

McDavid is a freak. pic.twitter.com/L0U3H6HcEV

“The other thing is simplicity, I think is a big thing,” Boudreau added. “[Players] don’t like complications, they want things in black and white in very simple terms. You have guys that are from foreign countries that don’t understand the language, you’ve got to simplify everything to make them understand.”

In the end, it seems like Boudreau came to a conclusive answer: sometimes analytics are good, and sometimes they aren’t.

“Sometimes too much analytics is not good for you,” Boudreau said to close out his answer. “But the proper analytics are really good.”