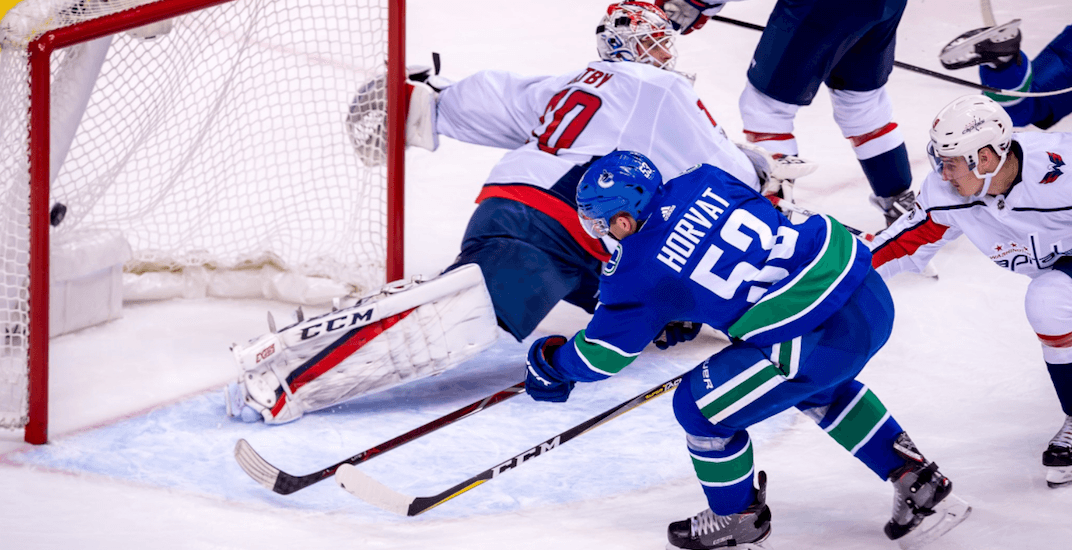 Well maybe that’s not true, but it’s been a long time since the Canucks had such a big margin of victory — a legit blowout.

The Canucks power play found its groove with three goals, Brock Boeser had three assists, and Derek Dorsett scored his sixth goal of the season. The Canucks beat the Capitals 6-2, and Vancouver has now won four in a row.

What’s the saying again? When it rains, it pours?

Very appropriate for a city like Vancouver, and on Thursday the power play goals came down like a torrential downpour. There was a beautiful between the legs pass from Sven Baertschi to Bo Horvat to make it 2-0.

🐻🧀 with the ridiculous pass to Horvat to put #Canucks up 2-0 pic.twitter.com/vpSMoPccXf

With Baertschi screening in front, the Canucks got a lucky bounce to make the score 4-0.

Then it was Baertschi again, after some good work by Boeser and Horvat.

Coming into this game, the Canucks power play was clicking at 10%. It’s jumped all the way to 15.9%. Maybe, just maybe, it’s finally turned the corner.

Back in the SixPack from October 22nd against the Detroit Red Wings, Omar ran a section called Dorsett is Vancouver’s Ovi.

Very prophetic if you ask me.

Playing against Washington’s Ovi, Dorsett scored his team-leading sixth goal of the season.

Ovechkin? He didn’t score at all. Dorsett > Ovi, confirmed.

Derek Dorsett misses the net, chases it, and then tucks it in to put the #Canucks up 5-0 pic.twitter.com/sfIGCHVZNE

Look, in all seriousness, we all know this goal scoring streak won’t last forever. Dorsett currently has a 14.29 shooting percentage and is on pace for over 50 goals if he somehow manages to keep this up. Whatever your thoughts about him are, this is a legitimately good story on a team that hasn’t had too many over the past couple of years.

10 games into the season, there are only 10 players in the NHL with more goals than Derek Dorsett. Let that soak in.

3. No doubt who should be the top line

The line of Daniel-Henrik-Virtanen played 9:24, 9:22, and 9:34 respectively at even strength. Only Vanek played less.

As much as I love seeing Dorsett find his scoring touch after 500 NHL games, you have to play the combo of Baertschi, Horvat, and Boeser more at even strength.

They lit it up on the power play tonight, and if you’re Travis Green, shouldn’t you give them more of a chance to see what they can do at 5-on-5? Boeser is having a Calder Trophy-worthy season (which we’ll get to later) and in the grand scheme of things, this season is about building towards the future.

The latest back and forth debate surrounding the Canucks concerns Ben Hutton. Is he a legit top-four defenceman or not?

A good read if you aren't completely sold on Ben Hutton. He's been better lately and I will not deny that. Curious Case of Benjamin Hutton. https://t.co/nQfgaJWRR7

Perhaps Ben searches his name on Twitter because he had a solid game tonight.

He and Tanev looked to have formed a solid pairing. While it’s still early, I’m buying Hutton as a top-four d-man.

Don’t look now but Brock Boeser is now in the top five of NHL rookie scoring.

His three assists tonight put him just two behind Clayton Keller for the rookie scoring lead. But what the points don’t tell you is that Boeser has not had as much ice time compared to many of his peers — a product of sitting the first two games that looks absolutely foolish now.

Boeser has had 122.8 minutes of ice time in all situations so far. Only Adrian Kempe has less. In contrast, Clayton Keller has 197.65. He’s averaging over 19 minutes a night, far more than what Boeser is getting.

At the beginning of the month, I wrote about how all the things that had to go right for Boeser to win the Calder. He’s easily capable of getting 20-25 goals — he just needs some help from the coaching staff to get the necessary ice time to do so.

When you make a no-look, backwards skate save to prevent a goal, you’ve earned SixPack Superstar status.

How to Defend by Christopher Tanev. #Canucks pic.twitter.com/s4md17IvdK