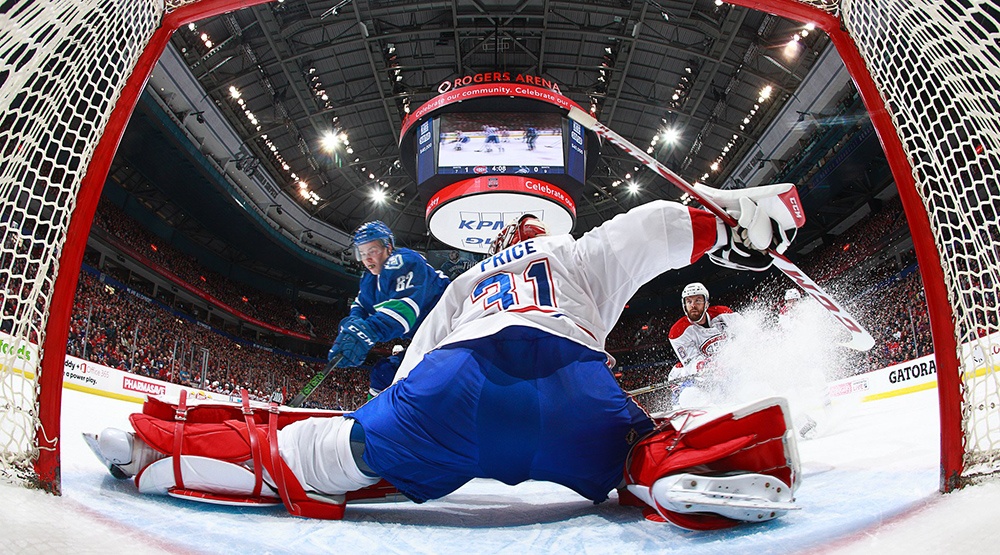 Pretty incredible atmosphere at Rogers Arena for the Habs game.

I think the #Habs got a bigger ovation coming out than the #Canucks did.

Why is there a giant Orca at the center ice of the Bell Centre?

Yeah, it felt like a home game for the away team.

It didn’t help them, though – well, except on the scoreboard. Although Montreal won 2-1 in OT, they sure didn’t look like the Cup contenders they’re supposed to be.

Even strength shot attempts were 50-44 for Vancouver, and the Canucks were the better team in the first and third periods.

So here’s a question: with Montreal loading up on gritty players at the deadline, and already having an incredible goalie – was all that Marc Bergevin’s doing? Or was it Claude Julien trying to recreate his magic recipe from 2011?

Hey, it did work for him then… though I’m sure you haven’t forgotten how his opponent was completely destroyed by injuries at the time…

You know what, sorry for the reminder. Let’s just pretend I never brought it up.

Before we get to more interesting stuff, here’s how we arrived at the final score.

They might want to save some of that luck for the playoffs.

Montreal scored first in the game, and Vancouver was battling back for the rest of it. Here’s the goal… and Henrik’s not great effort at the clearance along the boards before Mitchell scores.

Midway through the third, Vancouver tied it up on a goal from, who else, Mike Chaput, the legendary sniper.

As you probably know, Goldobin played about six minutes in his first game as a Canuck and 12 in his next. That bump from the first game was due mostly to Loui Eriksson’s injury, though, and with another winger (Reid Boucher) in the lineup Tuesday, most expected it to come back down.

In his third game as a Canuck, he started on a line with Bo Horvat and Sven Baertschi, with Eriksson still injured.

Midway through the first, Goldy made a pass that made many fans fear he’d played his last shift of the game.

But Willie went back to him, and crazily, like a veteran might do, Goldy made up for his mistake by going hard to the net and nearly scoring a goal on his next shift.

Of course, what we all wanted to see is what would happen in the third. With Willie notorious for trusting only his vets in the last 20 minutes of games, would Goldy even see the ice?

To start the third, Joseph Cramarossa jumped on with Horvat and Baertschi, while Goldobin played with the fourth line. Goldy did get two more shifts with them in the middle of the period, before he was benched with about eight minutes left.

Down by one in a one goal game, Willie moves from the more offensive Goldobin to Cramarossa… anyone reminded of how he’d go to Derek Dorsett when third periods came along?

Question is, how did Cramarossa become the new Dorsett?

Willie, explaining the move after the game:

“Nothing was going really. The Horvat/Baertschi line has been so good for me the last four games. I just thought maybe a heavier guy, maybe a guy playing a little different, maybe a little heavier might give me a different look.”

So the coach who never juggles lines moved from the guy with all the goal-scoring talent to the heavy guy… when he desperately needed a goal?

Back to his ice time.

@omarcanuck I’ll take the under.

There are a few who’ve defended the way Willie’s limited Goldobin’s ice time. Sekeres, Moj, Donny… and a couple of loud fans on Twitter.

Cramarossa takes Goldobin’s spot on the third line, which makes sense. He’s earned it. Been here way longer. Put in the work. Has coaches tr

4. Goldy and Willie on the same page?

Earlier Tuesday on TSN 1040, Goldy was asked if being asked to be responsible defensively makes him hesitate to jump into the play.

“Maybe a couple of years ago, yeah, but not right now. I feel comfortable with the D zone. I understand what I’m supposed to do and I feel good about that.”

Good confidence, but here’s what Willie had to say about Goldy’s game in his Tuesday presser:

“I think he’s respectful of the game, he wants to be a player, but all that’s real early to tell … We’re pushing him up the lineup quite a bit and I think that’s hard for him. People have to know it’s going to take time for him to play, but he has the talent to be a good player …

He looks and wants to get better … You can talk about it, but then you have to show it on the ice. That comes with time.”

Doesn’t feel like he’s agreeing with Goldy… but maybe that’s just me.

5. Did you catch what Linden said?

Linden was on TSN 1040 Tuesday morning.

His answer when Pratt asked him if Willie would be back next season:

“I think we’re going to take our time and look at our options at the end of the season and I’ll have to do a full assessment of our organization as I always do and we’ll move forward from that point.”

Pratt also asked if the Canucks want Miller back.

“We would. Obviously we value what he’s done for us and if there’s a fit that makes sense for him and us, we would definitely look at that option.”

Also possibly yikes, depending how you feel on Miller.

His best answer might be when Jake told him he likes Reid Boucher.

Reid – I’ve talked to him a few times – he’s the kind of kid who scored at the junior level, he scored at the American League level, and he’s gotta get his game to where he can make it happen at the NHL level.

We’re working on some things with him based around his conditioning and he needs to make a bigger committment to that, and I think he’s on that path. He’s a guy we look forward to seeing back here in September in training camp and making our team.

Unsolicited, Linden went to the team’s go to move – Boucher needs to commit to his conditioning – the kiss of death.

Must say, his conditioning doesn’t seem to bother him when it comes to getting pucks on net almost every time he has it though…

Let’s end on a positive: Goldobin’s going to be a fan favourite in Vancouver. Without a doubt, he’s got the most personality any Canuck has had since Eddie Lack.

I already included a quote from Goldobin’s 1040 interview above, but he had so much more to say. Really, you should listen to it yourself, but here’s are some of his best answers.

Q: When did you star playing hockey?

When I was five, you know, I just watched hockey on TV and I was like, ‘Oh dad, can we try it?’ and he brought me to the hockey arena outside and I stepped on the ice and I was really happy.

To be honestly (his word), Crosby was always my idol. Like, I didn’t watch the NHL but I heard about him. I had the old cards of him, Upper Deck.

Q: Were you good back then?

I’m not going to brag, but ya, I was always good. I was playing on the best team and with good partners, and we just grew up together and played ten years on the same line.

Q: What have you been told by this coaching staff you need to do to play at the NHL level?

I just need to play hard and earn my time and power play and everything. It’s not that easy.

Q: Have you chosen your goal song yet?

Not yet. It’s hard. I’m kind of a spotify guy so I have millions of songs on Spotify. I don’t know which one.

Q: Did your car make it up?

No. I don’t want it. I want to get another one. A better one, newer.

Lamborghini. I mean… it costs millions. Maybe someday I will make it.

Canucks fans hope so too, Goldy. Get it done.

Note: Thanks to Ryan Biech for always helping with the SixPack gifs. He’s a good kid.