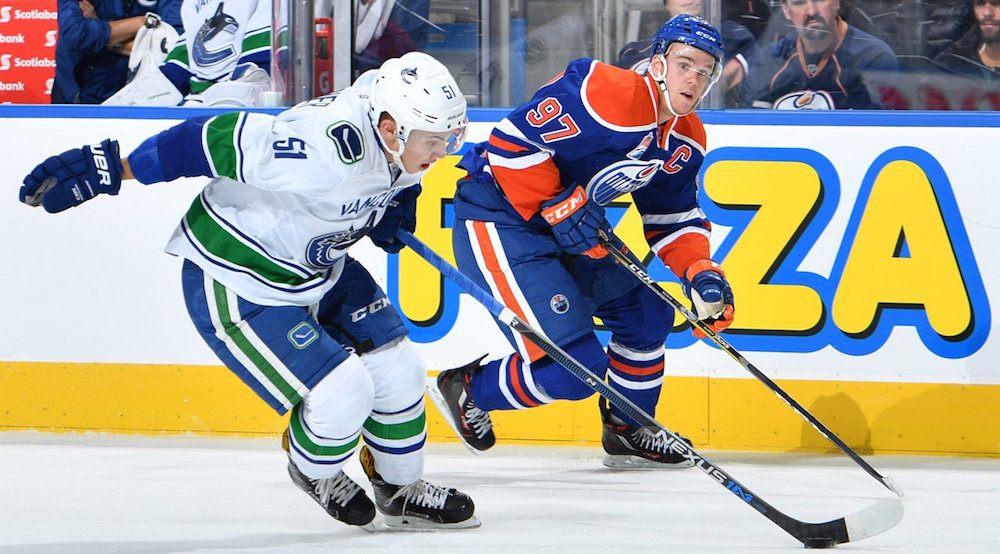 You’re getting your wish, Canucks fans.

Troy Stecher, the apple of fans’ eyes during the preseason, has been called up by the Canucks.

The 22-year-old Richmond native was a free agent signing out of the University of North Dakota this summer. The 5-foot-10 defenceman was not expected to challenge for a roster spot this season, but that’s exactly what he did, bursting onto the scene in his first preseason game with a goal and two assists. He was a late cut, to the dismay of many.

Accompanying Stecher on his flight to Vancouver will be Jayson Megna, who was also called up on Monday. Megna is a 26-year-old centre who has 54 games of NHL experience that the Canucks signed as a free agent in July.

Stecher and Megna have each played four games with the Utica Comets this season, with Stecher scoring one point (0-1-1) and Megna three (1-2-3).

The Canucks were without Anton Rodin, Alex Burrows, and Derek Dorsett last game, so the Megna call-up makes sense.

The Stecher recall should raise an eyebrow, given that the team already has eight defencemen on the roster. There have been rumours that Chris Tanev is banged up, although that still leaves the Canucks with more than enough d-men to get by.

Bringing up Stecher to sit in the press box would seem counter-productive at this point, but if he plays, what does that mean for Nikita Tryamkin, a 22-year-old defenceman on the roster who has yet to get into a game?

If Stecher gets into a game before Tryamkin, you have to wonder if that sends a message to the big Russian blueliner, who has refused an assignment to Utica.

The Canucks need to be fair to the players on their team, but they also need to be careful not to encourage Tryamkin, a restricted free agent at season’s end, to head back to Russia. It’s a balancing act.

In the meantime, it will be interesting to see how the local boy does if he gets into the lineup. Can the undersized blueliner be this year’s Ben Hutton? He could get his first opportunity to prove himself on Tuesday at home to the Ottawa Senators.