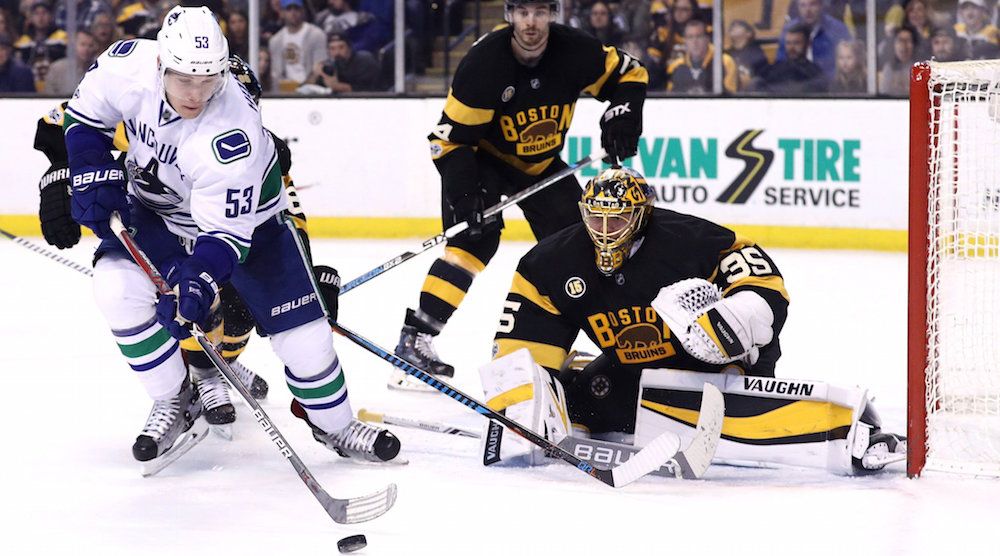 Vancouver threw it away.

If you’re the type who reads the box score and draws conclusions (aka Eastern hockey media), you’d see that the Canucks came back from one-goal deficits twice, were tied at 3-3 in the third, and lost 4-3 on a late Boston goal.

But if you watched, there’s no way you didn’t see how they wasted a solid outing from the skaters.

Despite a good start, a strong push at the end of the second, and a good third period, a couple of questionable decisions cost them at least a point in the standings.

Before the game, Willie Desjardins told Jon Abbott that Miller hadn’t been scheduled for the start (the Canucks are playing Miller’s old team in Buffalo on Sunday), but because of his strong play in Columbus on Thursday, they changed the plan.

Not the best move – we’ll get into that in a bit.

Strike two: sitting the team’s best scoring threat at the end of the game.

Sitting Horvat for Sutter? Willie once again showed who he thinks gives his team the best chance of scoring. Guess what? It goes against the stats test, the eye test, and the common sense test.

We’ll get into that… now.

His line, with Hansen and Burrows, was all the Bruins could handle on many shifts.

Horvat kicked off the scoring in the first with this.

And Horvat assisted Burrows’ tying goal at the end of the second.

But come the end of the game, with Vancouver needing a goal, one goal and one assist on the night was not enough to convince Willie.

Instead, Sutter was out there for about a minute and a half-long shift, while Horvat sat.

Really, either Hansen or Horvat would’ve made more sense than Sutter – both consistently put more pressure on other teams and have a better sense around the net.

Guess it’s a step up from Chaput, though?

According to Willie, the team’s plan for goalie starts had Miller sitting this one in favour of Markstrom.

It made sense – Miller hates playing tired, the Boston game was an early start, and they’re in the midst of a long road trip. Plus Vancouver plays Buffalo on Sunday, so he’d have got the game against his old team.

Yeah, it was a good plan. Too bad the Canucks don’t like plans.

When Miller got the shutout in Columbus everything changed.

But then came the goals.

First one: Skille didn’t get back and cover Kevan Miller here, but that shot was never in doubt and goalie Miller had a clear look and plenty of time to come across.

But that’s ok, it’s only one goal…

Second one: on Vatrano’s power play goal – Miller was once again a bit slow coming across.

Third one: bad play by Hutton leading to this goal, but see that frustrated look by Miller after the goal?

Oh, he was probably blaming Hutton, but he wasn’t having a great day, and he knew it.

In conclusion, Miller looked tired. With an early start on a long road trip, and a pretty good young goalie sitting on the bench ready to play – whose fault is that?

Look at who’s being played as a top-two defenceman for the Canucks. Here’s their ice time against Boston.

Sure, Sbisa’s been better this year, but 23 minutes?

Here’s what you get from Sbisa when you play him that much. He’s behind the net, and this is on the penalty kill… where your only job is to get the puck the f*** out of your own end.

I mean, chipping the puck to the front of your own net on the penalty kill could work… 1/100 times maybe?

4. Wish this had gone in

Henrik, bar down, against Boston, just like Cody did it five years ago?

It would’ve been too perfect. Like if Loui had gone into his old rink and scored the game winning goal.

The Canucks used to do things like that – remember when Mats Sundin scored the shootout winner in Toronto to win the game?

But those times… they’re long gone.

5. Who gets the blame on Big Country Virtanen?

On Friday, Ed Willes wrote about how Jake Virtanen showed up to training camp above the weight Vancouver wanted him at.

The problem, according to Benning, is Virtanen thought he had to be bigger to play the power game and showed up at camp weighing 228 pounds, setting off alarm bells throughout the organization.

The article led to a lot of speculation, and from what I saw, a lot of backlash. Many fans blamed the Canucks for Virtanen’s conditioning problems – he was in Vancouver all summer under close watch of the team’s trainers, after all.

Expanding on Willes’ article, Ryan Biech wrote about just how closely the Canucks were allowed to watch Virtanen for Canucks Army. The answer – apparently not closely at all.

Since Virtanen did not attend the Development Camp in July, article 15.11 clearly states that the Canucks cannot organize or hold any other camp during the off-season for any players.

They are allowed to open their facilities to the players, and they can use those areas to work out – which is exactly what Virtanen did. But they wouldn’t be able to monitor what the players are doing within those workouts or what happens outside of the rink …

The Canucks would’ve been able to provide suggestions, workout options and nutrition ideas for the player prior to closing the season out. So, if they said ‘bulk up’ and sent them on their way, it’s up to the player to follow what was given to him in April.

This explains why Virtanen’s training camp weigh-in set off “alarm bells” and why they weren’t able to monitor him more closely. It also doesn’t say much for the discipline of a player who’s supposed to be a cornerstone in the team’s future.

6. Another Hamhuis situation in Miller?

Last season, with most forward thinking Canucks fans hoping the team would trade Dan Hamhuis at the deadline as he was on an expiring contract, the team kept him and left the door open to re-signing him in the summer.

This year, with Ryan Miller in a similar position – his contract expires this summer and many fans would like to see him traded for whatever return he can grab – the team is saying similar things.

Here’s what Linden said about Miller (to TSN 1040 Friday morning):

“I will say I wouldn’t rule out Ryan coming back. It’s a situation we will look at at the end of the year and see where we are and see where Ryan is. He’s been everything we could ask for for sure.”

Linden’s answer leaves the door open for Vancouver to make a decision in the off-season, just as they did on Hamhuis.

More importantly, for the second year in a row Linden is saying they’ll push the decision on a decent trade deadline asset into the summer.

Meaning if they decide not to re-sign him, they wasted the value of another player they should’ve capitalized on.

Note: Thanks to birthday boy Ryan Biech for his awesome gifs