By the end of the Bruins game, everything was perfect in Vancouver.

The goaltending was amazing.

The scary thing is the entire thing almost didn’t happen. For about half a minute, we thought Chris Tanev wasn’t returning to play in the third period – this after Ryan Spooner drove him into the boards at the end of the second.

Henrik Sedin, Brandon Sutter, Dan Hamhuis, Ryan Miller – the impact of those injuries would pale in comparison to Tanev getting hurt. Yes, even Luca Sbisa’s.

OK, that might be a bit strong, but check out the top of the corsi chart for Vancouver. 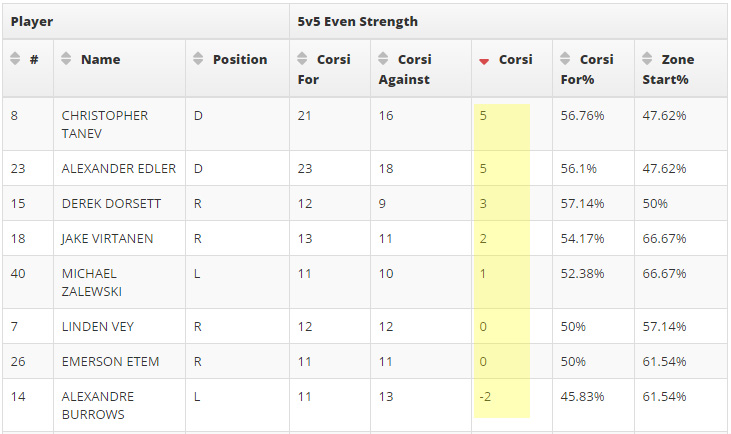 Like the sewage plant on Annacis Island, Tanev quietly goes about doing what he needs to do. Without them Vancouver would stop functioning.

He smells better, though. Even after hockey games.

Daniel Sedin to Sportsnet after the game: “We didn’t get outshot that bad and we had some more zone time too.”

Didn’t get outshot that bad? That’s something you celebrate in Vancouver.

John Garrett wrote a conspiracy theory article for Canucks.com a few days ago that had people up in arms.

But this hit by Spooner on Tanev, with not even a two minute penalty called, will only help his cause.

@omarcanuck they saw it as boarding on spooner by Tanev.

To me, this hit is worse than Grabovski’s on Henrik.

Tanev is in a more vulnerable spot – away from the boards, off balance. A nudge would send him face first into the boards, and Spooner came with more than a nudge.

Don't launch yourself into the boards, kids. https://t.co/BlMI5uvk4T

There were others who said it too.

Honestly, have you ever seen Tanev dive aside from in front of shots with whatever limb he can use? If Tanev sold this we’re having a cold, harsh winter in Vancouver.

Get a grip, people.

I mentioned above that the win doesn’t happen without Tanev. It wasn’t just his effort on the corsi-scoreboard that made me say that. He also set up Daniel Sedin’s big goal.

Not only did Daniel score the game-winning 3-2 goal, it was the 347th of his career and it set a new record for all-time goals scored by a Canuck.

I have another post coming on that, soon as I’m done this one.

For now, here’s the historical goal.

Again, Tanev came back from the dead, was Vancouver’s best player, AND set up the winning goal.

Once he’s done with hockey, he can sell his blood, and he’ll make good money doing it.

Oh, and as if the Canucks leading goalscorer of all time needed an open cage to shoot at Daniel scored an empty netter to ice the game – his 348th – Vancouver’s new record and counting.

Don’t forget Willie liked the look of Burrows-Vey-Etem together so much he chose to play Dorsett with the Sedins rather than break it up.

And now, after not scoring in 24 games, Burrows has done it in two games in a row.

Nice slapper from Burr on that one too.

Remember when the Canucks traded for goalie Mika Noronen at the deadline and fans hoped he’d be the goalie of the future?

OK, remember when Vancouver was hoping Dan Cloutier would be able to keep it together for a long playoff run?

Just thinking of the team’s goaltending in the dark days between Kirk McLean and Roberto Luongo is a nightmare.

Since then – Luongo, Schneider, Miller, Lack, and now Markstrom… and Demko’s coming.

Markstrom may not have stolen this one the way he did against Carolina or the way Miller went into New York and robbed both teams clean, but he made this insane late save to preserve the win.

Markstrom faced 30 shots, allowed 2 goals, and put up a .933 save percentage.

Looking forward to this guys' season debut with the #Canucks tonight. pic.twitter.com/gB0gtWmzsr

Also, if you look at that corsi chart above, Zalewski is one of the five Canucks on the positive side of the corsi stats against Boston.

Better – he went 5-2 in the faceoff circle, which is a ridiculous 71.4 winning percentage. On Vancouver, the worst faceoff team in the NHL, that’s a sorely needed addition.

And if you think Zalewski is a dump and chase, straightforward fourth liner, check out his play here.

He had a clear path to the net but instead of shooting, kept his head on a swivel and passed the puck to the trailer.

This guy’s been playing in Utica for two years?

Joke of the day alert:

@omarcanuck I'd like to see him on the "Typo line" alongside Baerstschi and Vrbata.

Canucks fans weren’t too happy when they heard Virtanen was being scratched two games in a row so Prust could play against the Rangers.

And by not happy, I mean this.

@omarcanuck What does Prust offer that Virtanen doesn't exactly?

@benkuzma Much rather have Virtanen in

@JayDizzleDee I want him to start reading what ppl are saying. We're not fans of him and I pray we don't waste useful cap space on him

This from Virtanen isn’t going to do anything to help Prust get back in the lineup.

All I’m saying is don’t be surprised if you see a Craigslist ad written by an anonymous west coast NHL team selling a depth forward for $1.

Note: Thanks to the legendary Ryan Biech for all his work on the gifs in this post.