Three disappointing losses in a row for the Canucks. There’ll be a lot of people saying Vancouver’s got no heart.

Truth is, they didn’t against Anaheim and Dallas. Especially Anaheim – they barely showed up for that game.

But this was a “must” game, as declared by Willie Desjardins. “Must compete” he said – the Canucks have to show up and be ready to play hard.

They lost 4-0 Saturday night. Worse, it was to the Bruins. That’s a four-year-old scoreline Canucks fans never wanted to relive, but they did in a big way.

Just like that game four years ago, the Canucks looked tired, outclassed, and they had no answers.

They wanted to. The Sedins tried to. Shots were 22-17 Bruins, Corsi was 41-34 at even strength. The Canucks showed up for this one more than they did the previous two.

Henrik Sedin after the game: “I would love to play against us right now.” (from Jason Brough)

Here’s what Henrik won’t say: it’s not his line he’d like to play against.

If the Canucks keep playing like this, you’ll see a lot of these tweets.

Take solace, Canucks fans. This is exactly what this franchise needs. Losing.

Let’s be clear, though – the Canucks are trying to win.

The mandate they set out before this season was to improve. They want to be faster this year, more physical and harder to play against, and that’s what Jim Benning thought they would be.

That’s why he added Matt Bartkowski, Brandon Prust, Brandon Sutter, and Sven Baertschi. That’s why he let go of Eddie Lack, Frank Corrado, Shawn Matthias, Brad Richardson, and Kevin Bieksa. It’s all in the name of becoming better while the young players develop.

There will be those who say this is a “stealth tank” or Canucks fans should be patient since the team is rebuilding.

But a bunch of fans wanted that this summer. They wanted management to say the team’s rebuilding, bear with us, it takes time. They didn’t do that, and that’s not what this team is going for. So should fans be patient?

It’s not hard to find theories on what’s wrong with the team. Ever talk to the not-as-hardcore-hockey-fans in your family and hear stuff like this?

I often just smile and nod when I hear this stuff. If I convince them otherwise, what’ll it do for me?

Anyway, my actual point is it’s the defence. When the team’s second pair is half-a-Hamhuis playing with Bartkowski, it’s an issue.

This has always been the problem. We knew it was coming. And boy would it be nice to have the option of trying Frankie Corrado in that D core right now.

Desjardins after the game: “We didn’t break out clean tonight.”

To make it more clear, this is what happens when any forward group is out there with a defensive pair other than Edler and Tanev. 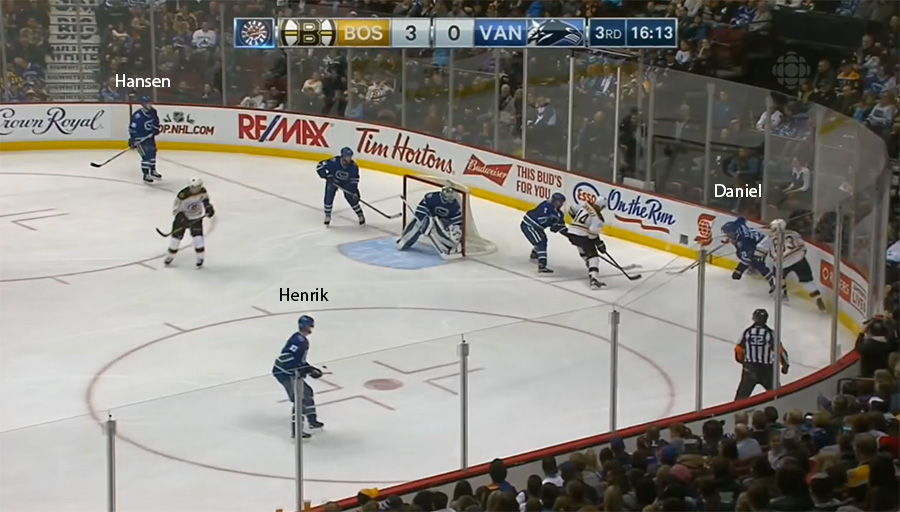 The two wingers are as far back as the defencemen in this play, and it’s not because the forecheckers are there. It’s because the defencemen – Bartkowski and Hamhuis here – are having trouble getting the puck and leading the breakout.

On a night when not many Canucks were on the positive side of the corsi numbers, Edler and Tanev were right at the top – plus-6 and plus-5 at even strength.

That’s because Edler makes plays like this pinch along the far boards – he’s not the problem.

Now the rest of them… Here’s Hamhuis making a defensive play.

Sadly, we’ve been showing a lot of these lately, but there you go.

Boston media was at the pre-game presser and asked Willie if Bartkowski’s been more consistent in Vancouver than he was for the Bruins.

Just so we’re on the same page – if he was consistent, the coach would’ve probably just said it in two words.

Now that I’ve explained how the defence is a mess behind Edler and Tanev, we can talk about the forwards behind the Sedins.

Jannik Hansen couldn’t have said it any better than what he said to Jason Botchford after the Dallas game – the Canucks haven’t had a second line since Kesler, Raymond and Samuelsson in 2011.

They haven’t. Scoring by committee doesn’t work – it takes skill.

The sad thing is for maybe the first time since 2011, they have the skill to put together a potent second line. They have Vrbata and they have McCann who’s played well with him. All they need is another winger and you’ve got a second line that gives you a real chance at scoring goals.

So let’s talk about that missing winger…

Is the Baerstschi experiment over yet? Because it should be.

Jake Virtanen… he’s going to be good, but he’s not there yet. In any case, he’s injured right now.

The solution: get Hunter Shinkaruk or Alex Grenier in there. If nothing else, they’ll be so jacked to be playing in the NHL, they’ll come out flying. They’ll give you at least two games of that type of energy, if not more.

And they’d give you more than Kenins – the guy Vancouver called up to replace Virtanen.

Fans and most of the media have been patient with Willie. We knew last year was his first year. He was learning.

This coaching staff doesn’t have much to work with, but the heat is officially on. #Canucks

It is. Two games in a row, he sat Jared McCann in the last eight minutes of the game. Instead he played Cracknell, Prust and Dorsett more.

I’m happy to report he didn’t do that against Boston. In fact, McCann played almost as much as the Sedins with his 16:40.

Which is good for McCann, but why is it almost as much as the Sedins?

They played under 18 minutes on a night when they were the only Canuck forwards doing anything and Boston was on the second part of a back-to-back at the end of a road trip.

Vancouver was far from out of it down 3-0 for most of the third period.

Maybe they are trying to tank?

5. Prust’s play of the game

Canucks fans didn’t know whether to celebrate or cry when Brandon Prust did this.

I am very conflicted over this. Prust spearing Marchand in the groin is dirty. Yet it was Marchand. #Canucks

#Canucks Prust does nothing when Stars hack Vertanen & McCann, then cheapshots Marchard in blowout game. #losers

Brandon Prust, #9 in your programs #1 in our hearts (and ice time) #canucks #gocanucksgo #nhl

Funny thing is he may win more fans with what might be the dirtiest play a Canuck player makes this year than he has doing anything else so far.

6. Be happy, it could be worse

Look, I don’t know how it could be worse – maybe if they played Calgary, Edmonton, Chicago, Boston and Toronto in a row and lost all of them? But I still want you to smile a bit.

The camera caught this shot of Benning during the third period, with the Canucks down 3-0.

My thought: he was giving them his version of the silent treatment for the way they were playing. I asked Twitter what they thought.

@omarcanuck need more plugs to inject some emotion to this team

Careful what you wish for.

On another note, Landon Ferraro scored. Father Ray was happy and proud. Clay caught the guy next to him in not as good a mood.

The guy on @rayferrarotsn‘s right doesn’t seem too impressed with the reaction to Landon’s first NHL goal. pic.twitter.com/n1M6DbqtN5

Note: thanks to our gif expert Ryan Biech for his help with the moving images