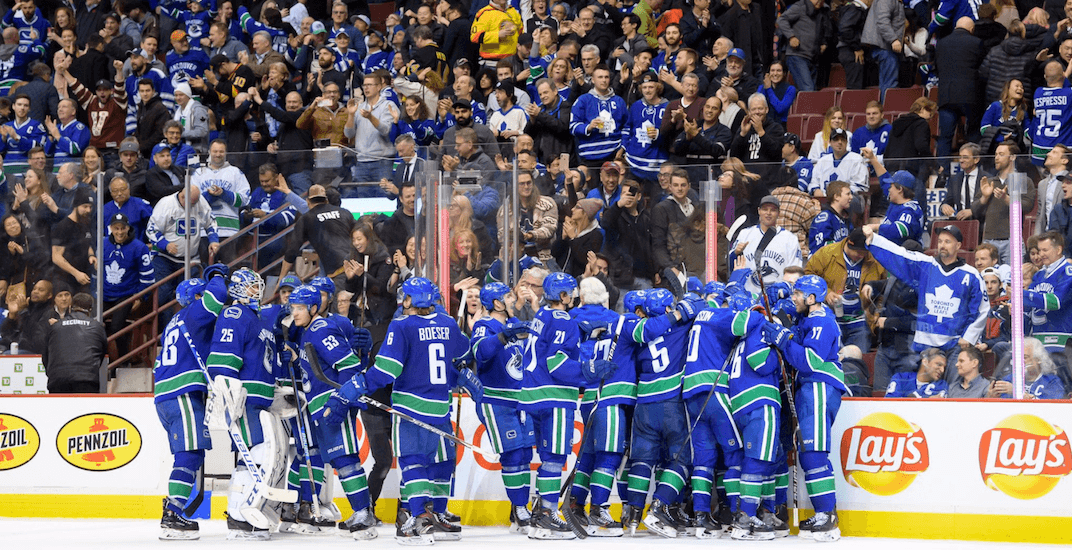 Truth be told, the Canucks probably would have been better off losing last night’s game.

Unless you believe they can pass four teams in the standings, making up seven points with 15 games to go for the last playoff spot in the West, then all winning accomplishes at this point is lowering their odds of a high draft pick.

But for one night, none of that mattered.

The Canucks can lose every other game, whatever. They beat the Leafs in Vancouver and that’s what really matters

Sportsnet’s Brian Burke on what happened when he ran the Canucks and the Leafs came to town with their fans: “we had more fights and arrests … but I had their $240, so they could (cheer) for who they wanted.”

The Toronto Maple Leafs were in town and their fans were everywhere. Paying big bucks for the most expensive game of the season, they arrived early for warmup (extra early, because special arrangements were made to start the game at 6 pm so fans in Toronto got a good night’s sleep). Signs filled the glass at the Leafs’ end of the rink, with blue and white Maple Leafs jerseys as far as the eye could see.

With their team now a Cup contender, Leafs fans arrived in larger numbers and were louder than I’ve ever seen at Rogers Arena. Feeble attempts at “go Canucks go” on the scoreboard were quickly drowned out by “go Leafs go.” Canucks fans did manage a “Leafs suck” chant to counterbalance it though.

You’d think it was a home game here for the @MapleLeafs with the amount of Toronto jerseys, and how the stadium erupts when they score. Two goals! #GoLeafsGo

With Toronto up 2-0 after two periods on goals from Ron Hainsey and Vancouver native Morgan Rielly, the win looked secure. After all, the Canucks have been struggling of late, losing six of their last seven, including a pathetic performance in Las Vegas in their last game.

But the hockey gods work in mysterious ways.

Canucks fans got the last laugh, as the Leafs blew their third period lead. Goals from Loui Eriksson and Josh Leivo tied the game up within the first five minutes of the third period.

As the game went into overtime, it was time for noted Leaf killer Alex Edler to step up to score the game-winner, just as he did in Toronto’s last visit to Rogers Arena. Edler’s wrist shot beat Leafs goalie Frederik Andersen, and once again, Leafs fans were sent home unhappy from Rogers Arena.

Despite their struggles in recent years, the Canucks have managed to step up when Toronto comes to town. The Canucks have lost just once on home ice to the Leafs since 2005, winning 10 of 11 games.

So sure, the Canucks might not be going to the playoffs. Sure, they might be a few years away from contending for a Stanley Cup. But at least they beat the Leafs at home and shut their fans up.