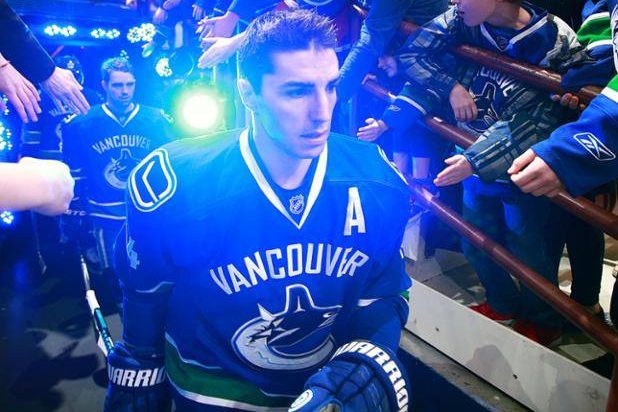 Many people expect the Vancouver Canucks to buyout the contract of Alex Burrows this summer.

On the surface, it makes a lot of sense. Burrows has one year left at a cap hit of $4.5M, which is pretty hefty for a guy coming off a 22-point season.

But I believe that it’s best for the team to ride out the final year of his contract, and it has little to do with Burrows himself.

According to CapFriendly.com, the Canucks currently have just under $10M in cap space, even with the contracts of Burrows and Higgins. They do still need to sign a few RFAs, but the only one who will likely demand more than $1M is Sven Baertschi.

Regardless, the Canucks have a lot of cap space this summer, even with Burrows’ contract. Let’s look at how much they’d save with a Burrows buyout:

I’ve always had a liking for math, so let’s do some basic number-crunching:

The most important numbers in the table above are in the “Savings” and “Buyout Cap Hit” columns on the right side. As you can see, a Burrows buyout would save the Canucks $2M in cap space for the upcoming season, a significant chunk.

The caveat here is that a buyout would also affect them in the following season where they would lose half the saved amount, in this case, $1M towards the cap.

So the reward for the Canucks buying out Burrows – in other words paying to not have his services – would only total $1M in cap savings in the end.

When looking at it that way, the question Canucks management should be asking themselves is, when will we need that cap space more?

As mentioned, the Canucks already have a lot of cap space for this offseason. Even after signing Baertschi and the other RFAs, Benning should have enough dough for a top free agent, like Loui Erriksson or Milan Lucic, if he so chooses.

Fast forward a year (2017-18), and the cap crunch is much more intense. Besides Burrows, Ryan Miller is the only big contract coming off the books. You still have the Sedin twins, Alex Edler, and Luca Sbisa on the final year of their contracts. Also, if Benning signs a free agent this summer, that player will be on the payroll too.

That’s a problem when you consider that the Canucks will have to sign Bo Horvat, Erik Gudbranson, Ben Hutton, Nikita Tryamkin, and Jacob Markstrom to new deals. It’s an even bigger problem when you see that those five players’ current cap hits don’t even combine for $8M, and those same five players are expected to be a part of the Canucks’ core. Needless to say, those five will be much more expensive in two seasons’ time.

When looking at the Canucks’ cap table, the 2017-18 season looks to be the one where they’ll run into the most problems, so the extra $1M penalty created by a Burrows buyout could prove to be costly. And for what? You’re paying a guy to NOT play for your team so you can save $2M in a year when you aren’t tight against the cap, and lose $1M in a year when you are.

The only feasible argument for buying out Burrows is that he is taking up a roster spot for a younger player. But a simple (and free) solution would be to use him as the 13th forward. Injuries are bound to happen, and I’m sure a 35-year-old Burrows would understand being a healthy scratch from time to time while playing out what could very well be his final NHL season.

Linden said he can see Burrows and Hamhuis being back next season.

"Talk to our young players, they know the importance of these veterans"

Burrows, for as much as other teams hate him, is a great person to have in the locker room with young players. He’s a walking example of how hard work pays off, and you need veterans around during a rebuild. He may not be what he once was, but he put up 33 points (18 goals) in 2014-15, which are good totals for a bottom-six forward.

He can also play the penalty-kill, be the net-front on the power play if needed, and as Benning would say, has some other “intangibles.”

But even if he didn’t have those things, the Canucks should advise against a Burrows buyout simply to avoid a potential cap crunch down the road.