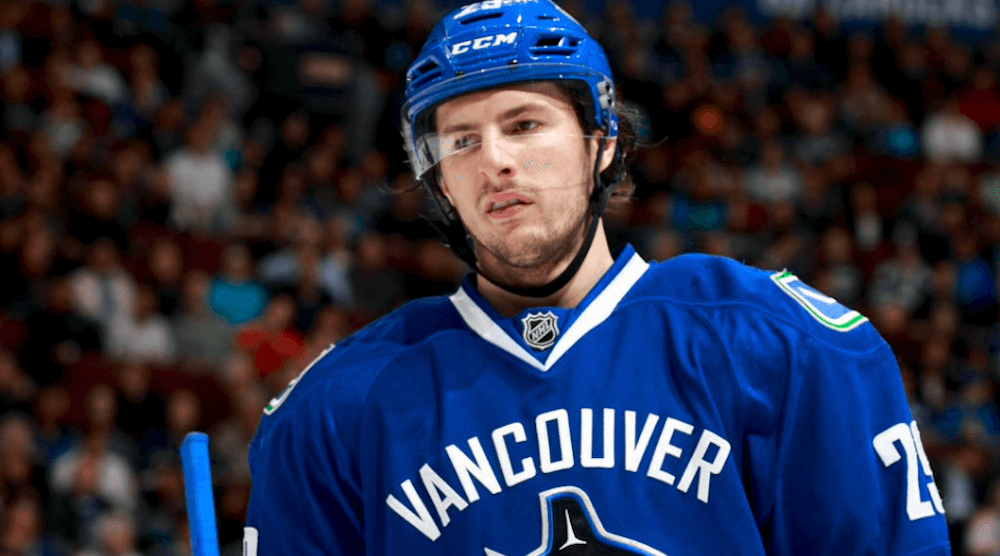 The Vancouver Canucks have placed defenceman Andrey Pedan on waivers, along with forwards Mike Zalewski, Jayson Megna, and Michael Chaput.

Zalewski, Megna, and Chaput should come as no surprise, while the Pedan move might cause some to raise an eyebrow.

Pedan was acquired from the New York Islanders on November 25, 2014 in exchange for Alexandre Mallet and a third-round pick. Like Linden Vey, Sven Baertschi, and Adam Clendening, he was a young player further along in his development acquired by GM Jim Benning.

Like Frank Corrado, he’s a young defenceman put on waivers by the Canucks in October.

#Canucks fans, if Barberio didn't get scooped yesterday, I wouldn't worry about Pedan being claimed.

Pedan doesn’t have the resume that Corrado does, so he could very well go unclaimed. The Lithuanian-born defenceman is 6-foot-5 and only 23 years-old, so we’ll see.

I’d love to give you a great assessment of Pedan’s play, but that’s precisely the problem. We simply haven’t seen him play very much.

He appeared in two games with the Canucks this preseason, and one of them was an untelevised game in San Jose. Pedan played just 17:24 in that secret San Jose game on September 27th, the lowest among all Canucks defencemen. The other defencemen on the roster that night: Chad Billins, Auston Sautner, Philip Larsen, Jordan Subban, Nikita Tryamkin.

Pedan played his second game of the preseason on Sunday at home, also to the Sharks. This time Vancouver dressed a more representational lineup, but again Pedan saw very low time-on-ice. He instigated a fight with Dan Kelly of the Sharks, meaning that he received 17 minutes in penalties, so that didn’t help. He finished the night playing just 10:43.

To send Pedan to the AHL without giving him a serious look begs the question: was this the plan all along? You have to wonder if management are pulling a similar move as what they did with Jacob Markstrom two seasons ago. That year they sent Markstrom to the minors very early with the goal of sneaking him through waivers, after just one preseason game in an untelevised game against the Sharks in Stockton, California.

Like Markstrom then, Pedan needs to play to get better. Keeping him around as an eighth defencemen could be detrimental to his development.

Pedan played in 13 games with the Canucks last season, but many of them had him playing as a forward. In Utica, by all reports, he had a strong season.

“He’s got a lot of skill, he’s got a lot of talent,” Comets coach Travis Green told Daily Hive in July interview. “He skates well, he shoots the puck well, he passes the puck hard, he hits, he fights. He just needs to keep getting better.”

The question remains: can he do it at the NHL level?

“He’s a young defenceman that I think in the past he’s skated so well and probably been able to skate his way out of trouble a lot. And now at the NHL level, for him to be effective, he’s got to learn to almost simplify things and make sure he makes the right play and the right pass and moves it quick and he’s not going to count on skating the puck up ice.”

Those don’t sound like the types of issues that can be fixed with a couple of exhibition games or a good summer workout plan.

“When you’re dealing with young players they feel at our level that they can play the power play, they can rush the puck up the ice, and trying to break them of certain habits is vital. If his brain can catch up to where he skates and the rest of his skill level, if he can get to that NHL level I think he’s got a chance to play.”

Vancouver has 10 defencemen remaining on their roster. They’ll likely need to trim that number down to eight before opening night.