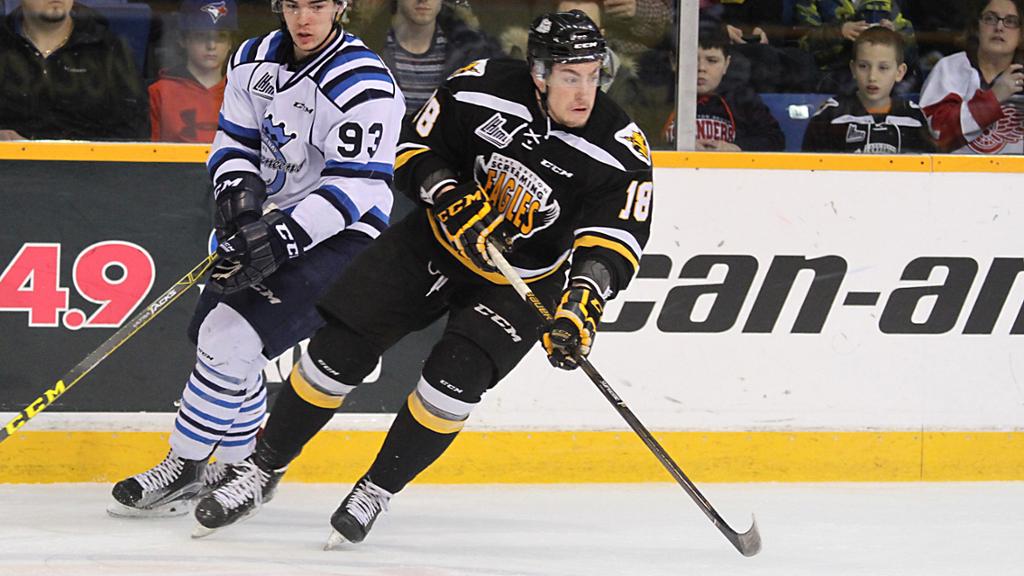 There is excitement to be had this month as the Canucks will have their highest selection at the NHL Draft since selecting Daniel and Henrik Sedin in 1999.

This year, the Canucks will enter the festivities armed with the 5th overall pick. There is some intrigue on who they will select as there are a couple of very good options who may be available when GM Jim Benning takes the podium. Over the next couple of days, we will take a look at three players that the Canucks are mostly likely select, starting with the #1 ranked North American skater, Pierre-Luc Dubois.

Dubois was ranked seventh among North Americans skaters at the mid-season rankings in January, but saw a rise to first after a very impressive second half that saw him step up his game when it mattered most.

Hailing from Ste-Agathe-des-Montes, Quebec, Dubois is a well rounded player who seems to do everything right. Anysley Scott at Dobber Prospects, does a fantastic job of summarizing Dubois’s game:

Pierre-Luc Dubois is an exceptionally well rounded prospect that should have scouts drooling heading into the 2016 NHL Entry Draft. Big and strong, Dubois is also an excellent skater, agile and possessing plus two step quickness, that is equally capable of setting up dangerous scoring plays or burying the puck himself. He combines the ability to protect the puck with a quick and accurate release to create havoc in the offensive zone every time he touches the puck. Possessing elite on-ice vision and hockey sense, Dubois is a complete 200 ft player that that can out muscle even the strongest of opponents for loose pucks. Dubois is extremely versatile as he can play anywhere at forward, including excelling at winning draws when pushed into the middle, and can bully his way through traffic or along the boards. He currently has the penchant for taking too many minor penalties but much of that is due to his ability to dominate the opposition physically at the junior ranks.

Aside from the penalties and discipline, which is something that can be worked on, Dubois sounds like a very tantalizing package of a player that the Canucks could use within their forward ranks.

The question about Dubois that has been asked regularly, is if he will be able to make the NHL as a centre. Naturally a left winger, Dubois was shifted to centre this past season for the Cape Breton Screaming Eagles out of necessity. They were lacking depth in that area and the organization felt that Dubois had the hockey smarts to make the transition. They were correct with their hunch, as he did very well there in all three zones. At times, he had some issues in the face-off circle, but finished the season with a face-off winning percentage above 50%.

If he can continue to develop and hone his skills there, the thought is that 6’3″, 200-pound players with Dubois’ skill-set don’t come around often. Even if he ends being a left winger in the NHL, he will still have a very positive impact to whoever selects him.

What is particularly impressive about Dubois’ season is that 83 of his 99 points, or 83.8%, were primary points. Primary points are made up of goals or first assists, and are used as one of the many measuring sticks for players because it is generally an indicator of being the creator of a play. If a lot of a players’ points are made of secondary assists, there is concern that the player is merely benefiting from other players. As we can see, this isn’t a concern with Dubois.

This past December, Dubois was a late cut from making Team Canada for the World Juniors. If he does return to junior next season, he will without a doubt get a chance to represent his country.

Dubois was a standout at the CHL/NHL Top Prospects Game in Vancouver this past January, posting one goal and two assists. Although the game should be taken with a grain of salt, as it’s just one game, his showing was still impressive. His goal, which turned out to be the game winner, displays his skill-set very well:

Throughout the entire game, he was all over the ice creating chances and distributing the puck. If it’s a sign of things to come for him here in Vancouver, then you can’t help but get excited.

The Cape Breton forward had a good showing in the QMJHL playoffs, posting 12 points in 12 games before being eliminated in the second round. Unfortunately, because Cape Breton made the second round, Dubois was unable to attend the U18 World Championships, which would’ve been a great chance for him to showcase his skills against his peers.

There is fair belief that the Canucks are very interested in taking Dubois and you can’t blame them for being attracted to his game. He has the speed, skill, hockey IQ, shot, and frame that projects him to be a very good NHL player for a long time.

Tomorrow, we will profile London Knights forward Matthew Tkachuk who had a standout performance during the OHL playoffs and Memorial Cup.