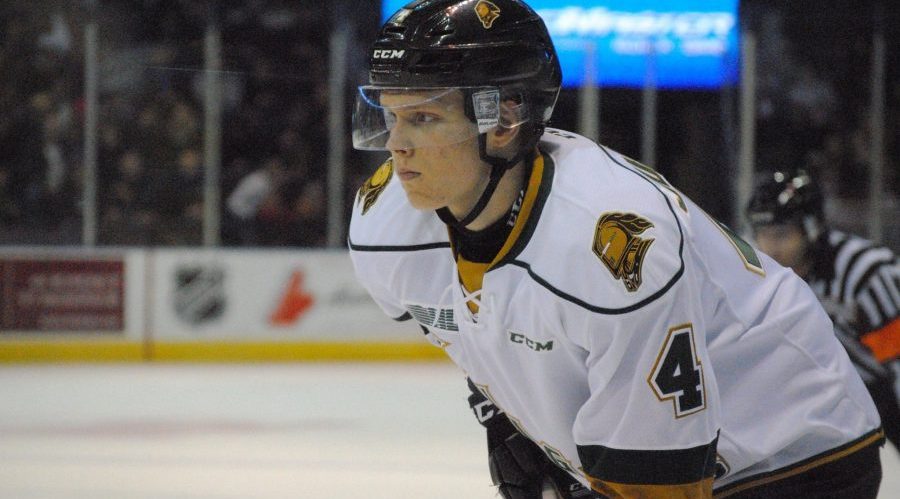 There is a belief among many that the Canucks would be wise to use the 5th overall pick in this year’s draft to select a defenceman.

The argument is that a high-end, minute-eating defenceman is impossible to acquire any other way other than drafting and developing them yourself and the Canucks are lacking defensive prospects.

That brings us to Finnish defenceman Olli Juolevi. If the Canucks do choose to select at defenceman with their 5th overall pick, they would be wise to take him.

Coming into the 2016 NHL Draft, Juolevi is rated 5th among North American skaters after a very impressive season with the London Knights. The left-handed defenceman made the jump to the OHL with hopes of raising his draft stock, and that he did. Curtis Joe at Elite Prospects provides a very good breakdown of Juolevi’s game:

A competitive spark-plug, Olli Juolevi is a complete, all-around defenceman that can hem the opposition in their own end or make things difficult for the opposition at home; either way, he puts the pressure on and lays it on thick. A strong and balanced skater, he can rush the puck through the neutral zone with ease or backcheck with haste. Uses his size to his advantage, but knows his physical limits and plays within them. Instead of playing overly physical, he makes his presence felt by exhibiting his high-end playmaking ability and puck possession play. All-in-all, a well-rounded blueliner who thrives under pressure and can be trusted in all situations.

He has the size, skating, hockey IQ, and puck moving abilities that every team covets on the blue-line. The left-handed shooting rearguard may have just turned 18, but he plays like someone who has been playing for years, always making the high percentage play that allows his team to transition the puck with speed. Defencemen usually take longer to develop than their forward counterparts, but Juolevi looks like a decent bet to break that mould and become a full time NHL player sooner. 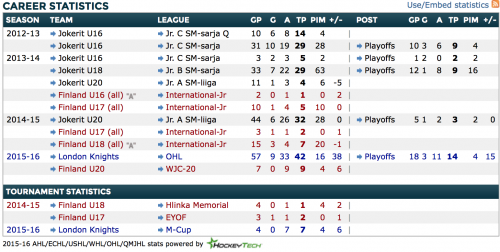 The Helsinki native finished the season with the 4th-most points among draft eligible defencemen in the OHL, but he appeared in fewer games (57) and was last in shooting percentage (6.9%) among the defencemen ahead of him. If he had appeared in a few more games or had a shooting percentage closer to league average, he likely would have finished in the top three. He appeared in the fewest amount of games among the OHL draft eligible defenceman is because he was at the World Juniors representing Finland.

The World Juniors is generally regarded as 19-year-old tournament with a sprinkling of elite 17 and 18 year olds playing, with those younger players usually being forwards. Not only did Juolevi make the team as a 17-year-old, he was Finland’s best defenceman by a large margin and helped lead them to a gold medal. Posting nine assists in seven games along the way, Juolevi was all over the place for Finland. Leading their power play, shutting down other teams’ attack on the penalty kill, and controlling play during even strength, it was a coming out party for Juolevi.

He followed his impressive season up by helping London win the OHL Championship and the Memorial Cup. He posted 21 points (3-18-21) in 22 combined games. Impressive stuff for a draft eligible defenceman.

The 6’2″, 185-pound defenceman is very confident in his abilities, and isn’t afraid to let people know, like he did at the NHL Draft Combine last week:

Aside from being confident, we can see Juolevi has the intangible of being a winner everywhere he goes. Obviously he was surrounded by great teammates that helped him along the way, but he just seems to find a way to win. We’ve heard GM Jim Benning mention many times that he is looking for players they ‘can win with’, because of his skillset and that winning pedigree,  you can see why Juolevi would be a target for the Canucks.

It’s absolutely true that the Canucks lack a high-end defensive prospect that easily projects into their future plans. Saying the Canucks don’t have any defensive prospects isn’t fair, as they do have some skilled players developing right now, but all of their current prospects do come with questions marks. Taking a defenceman early in the first round would go a long way towards squashing some of those questions.

If the Canucks want to a defenceman in the first round – either at 5th overall, or trading down a few spots – taking Juolevi would be a wise move. His skills may never wow you, but he does all the little things right.