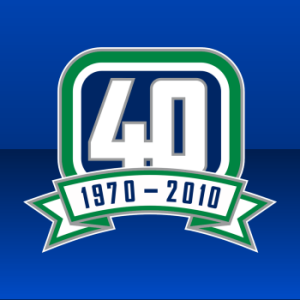 Just saw this on my twitter feed and thought I’d share it with the rest of you. The logo celebrates the Canucks 40th year in the NHL.  It kind of sucks that they still haven’t won a cup in the 40 years they’ve been in the league. It’s kind of plain, but I think it goes well with the rest of the Canucks look these days. What do you guys think?