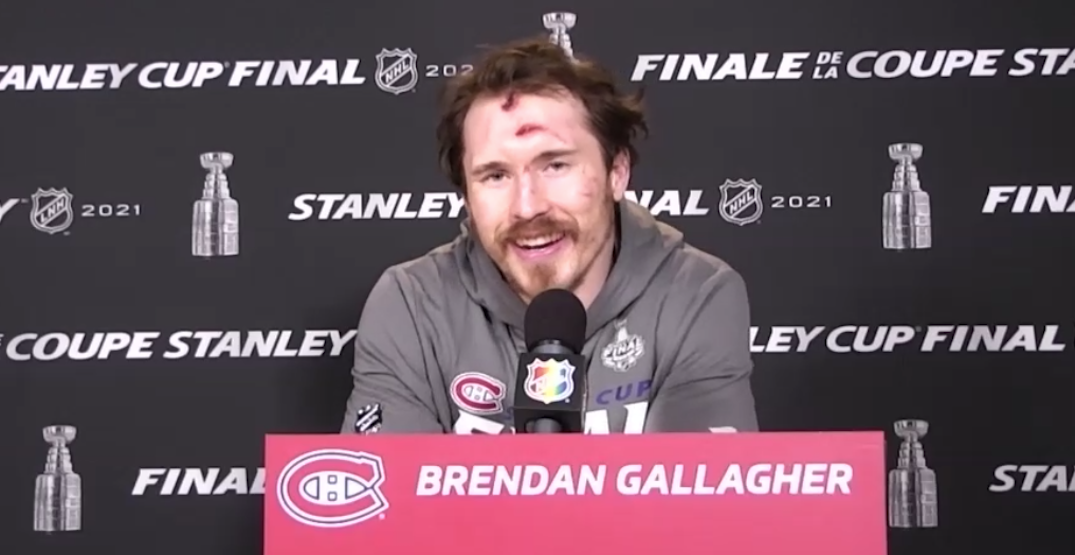 Montreal Canadiens forward Brendan Gallagher and his messy face in Game 1 of the Stanley Cup Final was the talk of the internet.

After getting in a scrum with Tampa Bay’s Mikhail Sergachev, Gallagher ended up with his face being covered in blood.

Gallagher himself addressed the incident Wednesday following the Canadiens’ pregame skate, with a cut still quite visible on his forehead.

“I saw the picture,” Gallagher said prior to Game 2 in Tampa. “I can’t tell you what was going through my mind at that time. Probably not very happy.”

Montreal lost 5-1 to the Lightning on Monday night in the series opener, but Gallagher is confident the Canadiens can bounce back tonight.

“We know what we are as a hockey team and we believe in each other,” he said. “We believe that when we play the way we need to play, when we play our game, we dictate the style of hockey it is and we can compete with anyone. We’ve shown that here through three rounds.”

Gallagher also confirmed he didn’t think he suffered a more serious injury than a bad gash.

“I have a pretty specific way I react when I have a concussion which involves yelling a lot, but I was pretty calm,” he said.

“You’re going to crosscheck his face into the ice, but you’re not going to stop him,” Richardson said. “He’s going to get up and smile in your face.”

“Gally’s a competitor, through and through,” Merrill said. “You can see it from the first time you step into the dressing room. He’s a guy who drives the bus around here. He’s pushing the pace in practice and in the weight room.”

Gallagher has scored twice and added three assists in 18 playoff games this year.