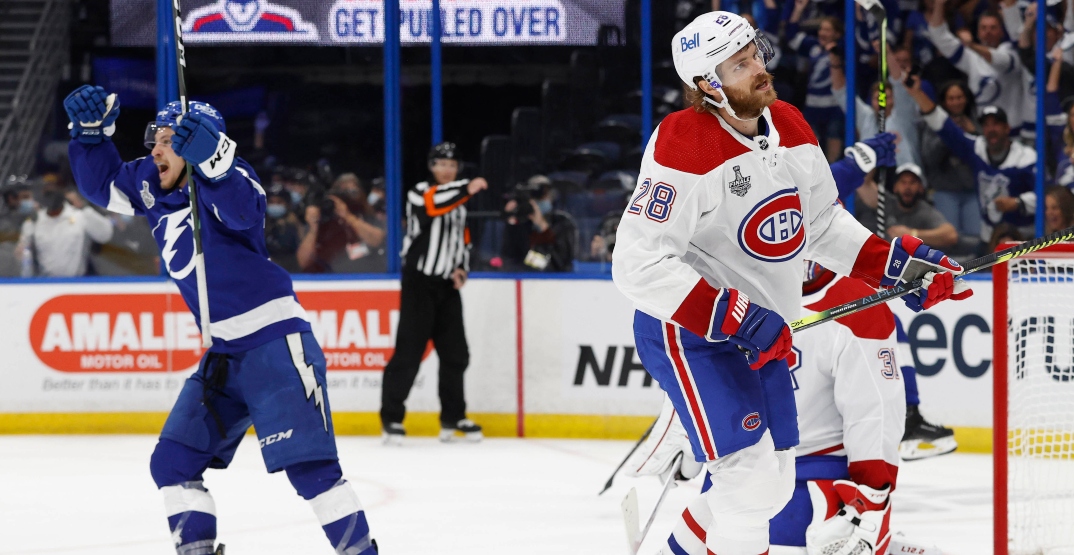 It wasn’t the start the Montreal Canadiens were hoping for in their first Stanley Cup Final in nearly three decades, as they dropped a 5-1 decision to the Tampa Bay Lightning in Game 1 at Amalie Arena on Monday.

The all-important first goal was scored by Lightning defenceman Erik Cernak just over six minutes into the first period. The Canadiens fell to 1-4 in these playoffs when allowing the first goal compared to 11-2 when they score the first goal.

Yanni Gourde extended Tampa Bay’s lead to 2-0 just about six minutes into the second period. Ben Chiarot responded for Montreal late in the period, but then batted a puck into his own net early in the third to give the Bolts their two-goal lead back.

The goal was credited to Nikita Kucherov, who added another tally later in the third.

Steven Stamkos scored a late power-play goal for the Lightning, the first goal the Habs penalty kill has allowed since Game 4 of their first-round series against the Toronto Maple Leafs.

Cernak opened the scoring after joining the rush and deflecting a pass from Ondrej Palaj by Carey Price’s glove.

The goal was Cernak’s first in 46 career playoff games.

Tampa Bay’s lead was extended when a Blake Coleman shot deflected off Gourde in front of the net and beat Price.

Blake Coleman pots the deflection past Carey Price and it's 2-0 for the @TBLightning! #ItsOn | #StanleyCup pic.twitter.com/4kyBI8xmeD

Chiarot scored his first point of the postseason, and his first career playoff goal, when a slap shot from the point deflected off a couple of Lightning players and beat Andrei Vasilevskiy.

The @CanadiensMTL are on the board! #ItsOn | #StanleyCup pic.twitter.com/CSv6Dgcy6V

Early in the third, though, Chiarot tried to swat a puck out of the air in front of Price, and instead knocked it into his own net.

Another goal, another deflection!

Kucherov sniped home another off a defensive zone faceoff loss for Montreal later in the period.

Off the faceoff and into the net! 💥

With just over a minute to go, Stamkos managed to squeeze a shot through Price from a tough angle to make it 5-1 and snap Montreal’s penalty kill streak.

Joel Armia was unable to fly to Tampa with the Canadiens on Sunday due to COVID-19 protocol, but took a private jet down on Monday after clearing the protocol. Despite taking part in warm-ups, Armia didn’t play. Instead, Jake Evans played for the first time since being stretchered off the ice late in Game 1 of Montreal’s second-round series against the Winnipeg Jets after taking a charge from Mark Scheifele that landed Scheifele a four-game suspension.

If there’s a bright side for Habs fans, it’s that they looked a bit overwhelmed in losing Game 1 to the Vegas Golden Knights, too. That series still turned out alright for them. In fact, the last three Stanley Cup Finals were all won by the team that lost Game 1.