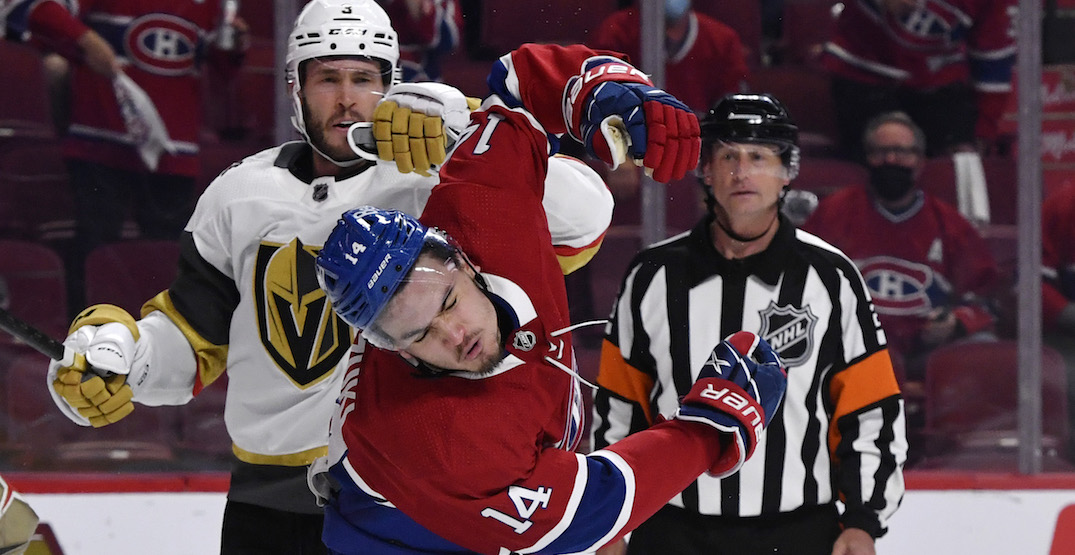 Julie Petry has an idea.

Instead of only asking players about missed penalty calls, why don’t the officials get quizzed by the media too?

Julie’s husband, defenceman Jeff Petry, was one of the Montreal Canadiens players that spoke to the media today, and refereeing was a topic that came up.

Game 4 on Sunday was filled with questionable decisions from both referees Chris Lee and Dan O’Rourke. Despite many opportunities to call what looked to be obvious penalties, just four minor penalties were dished out — and only one power play given to each team.

Habs fans were furious, and you could tell the players weren’t thrilled either.

Nick Suzuki was punched in the face, right in front of Lee, by Vegas defenceman Brayden McNabb, but no penalty was called. A boarding penalty could have easily been called on Tomas Nosek for hitting Shea Weber from behind, and Weber should have been called for roughing or crosschecking in retaliation. Instead, both players got offsetting unsportsmanlike conduct penalties for continuing their skirmish.

Both Weber and Nosek get penalities but come on man pic.twitter.com/5nwij30eAr

Petry, a 33-year-old veteran, is far too smart to publicly criticize the refereeing in the series. Doing so would open himself up to a fine by the National Hockey League, so he remained diplomatic in his answers.

“I’m not going to comment on any of the non-calls,” said the Canadiens blueliner. “It is a little bit more lax, so you have the ability to make it hard for guys to come in front of the net. Knowing that, we just have to continue to play our game and be hard on guys. The penalty calls are all out of our control. It’s just a matter of playing our game and not wasting our energy on worrying about what’s and what’s not.”

Habs forward Brendan Gallagher also spoke about the refs, but stopped short of expressing how he really felt.

“We can’t control what their thought process or decision-making is,” said Gallagher. “Everyone’s been watching. I don’t think I really need to comment too much on that side of it.”

“Why don’t we just have the officials do media?”

In a video posted to Instagram, Jeff Petry’s wife, Julie, was a bit more candid.

Julie Petry doing more to put the NHL officiating in its place than any GM, coach, player or journalist in the last few years.

“Just a thought from a spectator.”

It’s not a bad idea.

Referees and linesmen aren’t allowed to speak publicly after games, and the NHL has been criticized for not being as transparent as other leagues with regards to officiating.

“Fair for both teams”

While Petry and Gallagher appeared to be biting their tongues when addressing the topic, Golden Knights players seemed far more accepting of the way the series has been called — which is telling.

“Both sides will be disappointed by some calls,” said Vegas forward Jonathan Marchessault, who also pointed out that the standard changes from the regular season to the playoffs, but “good teams find a way to go through it.”

“There’s stuff they’re going to let go and not let go… you get good calls or bad calls,” he said.

Golden Knights defenceman Alex Pietrangelo said he felt like the refereeing was fair for both teams.

“You can sit here and complain about one play or another, but I think if the standard’s the same on both sides, then I think it’s fair for both teams,” said Pietrangelo. “That’s the way it was last night. It was like that in previous games.”