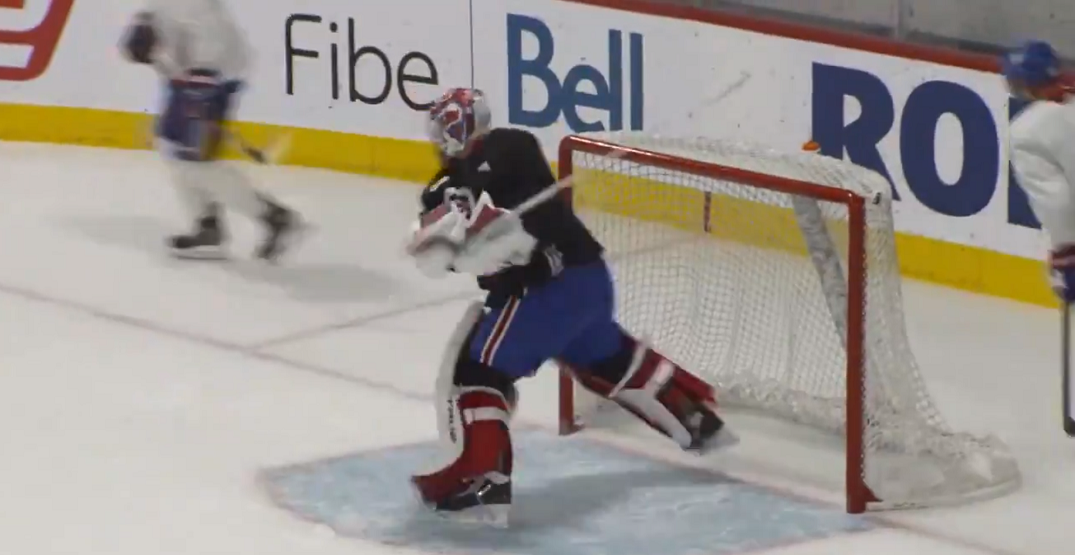 Whatever emotions Montreal Canadiens goaltender Carey Price is feeling heading into tomorrow night’s playoff opener against the Toronto Maple Leafs, he was quite active about it.

The usually-stoic goaltender wasn’t exactly kind to his stick, smashing it in half after allowing a goal during practice.

on the eve of Game 1, angry #Habs Carey Price has entered the chat: pic.twitter.com/U39A6ov28s

There are a couple different ways to take this.

It’s a bit of a Rorschach test. Without extrapolating too much from a short clip that happens quite often in professional sports, Price still does have his work cut out for him when the Leafs-Habs playoff series kicks off.

His Canadiens are heavy underdogs, with a lot on the line for both the team and player. Goaltender Jake Allen actually played 29 games this year to Price’s 25, with his .907 save percentage a touch better than Price’s .901.

If Allen does end up starting any games this series, it’s not exactly a vote of confidence for a player who’s supposed to be as rock-solid as they come.

At age 33, Price has had one of the most remarkable goalie careers of any era, picking up two Olympic gold medals, a Hart Trophy, a Vezina Trophy, and a Jennings trophy. The Hall of Fame seems inevitable.

But it has not been very easy for Price since his July 2, 2017 contract signing that made him one of the league’s highest paid goalies in history. He has five years left at $10.5 million and a full no-movement clause, and is ranked 39th out of 63 goalies in regular season save percentage amongst goalies with at least 50 starts in over those four seasons.

Price won just one of his four matchups against Toronto this year, with an .868 save percentage and 14 goals allowed in those games. Over the past three seasons, Price has allowed three or more goals in seven of his ten outings against Toronto, sporting a 4-3-3 record.

Then again, Price performed well during last year’s summer bubble in Toronto, winning their first round play-in matchup against the Pittsburgh Penguins. He also won a pair of games against the top-seed Flyers, finishing with a .936 save percentage in 10 games.

Unfortunately for Price, that’s the only playoff action he’s had since 2017. In a tune-up AHL conditioning game against the Toronto Marlies this week, Price was saddled with the loss after giving up a pair of goals on 15 shots in 30 minutes of action.

We will get answers soon enough as to what version of “Playoff P” we will be getting tomorrow.