Canadians may see value in zoos and aquariums, but they apparently take a different tack when it comes to cetaceans being kept in captivity.

According to newly released data from the Angus Reid Institute, a recent survey shows that Canadians largely support a ban on keeping cetaceans — whales, dolphins, porpoises — captive in aquariums.

The poll comes just over a year after the controversial cetacean ban placed on the Vancouver Aquarium in March of last year, when the city’s park board voted to make a bylaw amendment that would prohibit the display of cetaceans.

More than twice as many survey respondents were on board with the ban (47%) compared to those who would allow aquariums to keep cetaceans (21%), though about a third of Canadians surveyed stated that they weren’t sure/couldn’t say (32%). 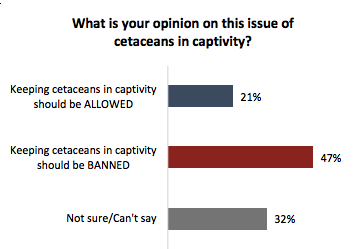 British Columbia was actually the most in favour of allowing aquariums to keep cetaceans in captivity with 35% of respondents against a ban — through 40% were still for it.

For the survey, the Angus Reid Institute questioned a randomized sample of 1,509 Canadian adults between March 27 and 29 on their views regarding cetaceans, zoos, and aquariums.

While nearly half the respondents were against the keeping cetaceans captive, 78% of respondents agreed that “zoos and aquariums are an important part of wildlife conservation efforts” and 65% stated that “having a zoo or an aquarium makes a community a better place to live.”

Zoos and aquariums also act as important educational centres, according to 56% of respondents, as the majority disagreed with the survey’s statement that “zoos and aquariums don’t teach the public anything it couldn’t learn from documentary films and TV shows.” 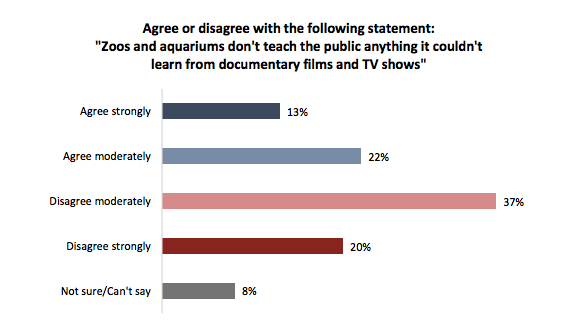 However, even though the majority of respondents agreed that zoos and aquariums had a positive impact on the education and sense of community for the people around them, few agreed that keeping wild animals in captivity is always acceptable.

Most respondents (55%) stated that it would depend on what species, how intelligent, and how endangered the captive animals is for it to be acceptable to keep it in a zoo or aquarium, and another 17% stated that keep wild animals in captivity for any reason is basically always wrong.