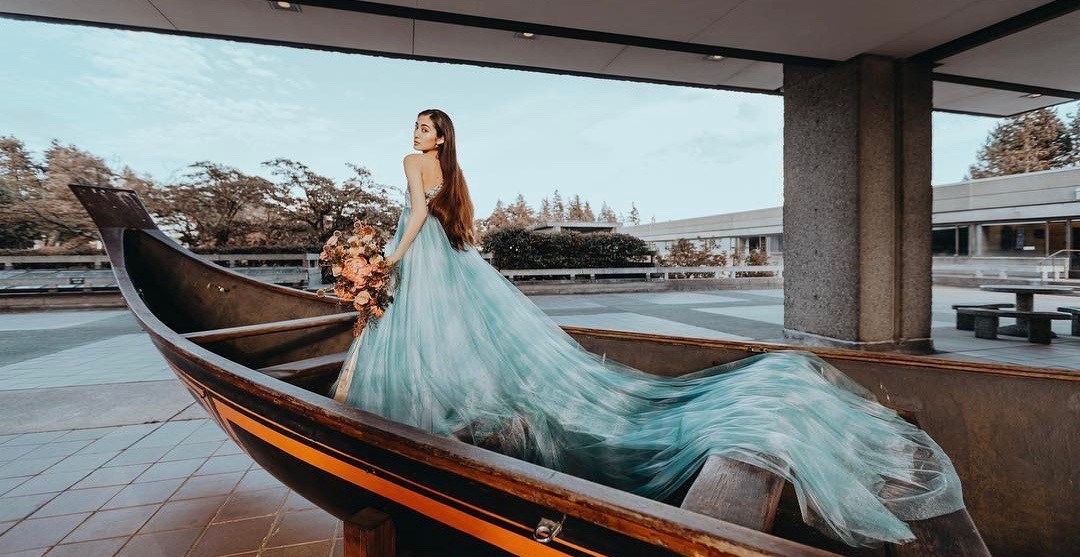 We already bring you the best Canadian Fashion moments of the week, so we thought it was about time to mix in some of the hottest designers the West Coast of Canada has to offer.

And while Vancouver is typically thought of as a yoga-pant-wearing culture rather than a trend-setting one, we’re going to help shred that reputation by introducing you to these local designers currently walking the catwalk on a global scale.

With otherworldly silhouettes, extreme prints and crazy conceptional designs, these designers are at the top of their couture fashion game right now.

We highly encourage you to put these IG accounts on your watch list for some fresh follows.

All it takes is a quick jaunt around Vancouver’s Chinatown, home to Ryan Li’s emerging fashion studio, to see why the neighbourhood is one of his major creative influences.

“I find Chinatown very interesting and dynamic — you can see different sides of Vancouver there,” says Li. “Chinatown is a place where western culture blends perfectly with eastern architecture. But when you look beyond the glamour and beauty, you can see the hidden issues in Vancouver, which are constantly overlooked and are nearly invisible to others.”

As a strong advocate for the re-emergence of sharp-fitting tailoring, Li could be considered the poster child for traditional craftsmanship in Vancouver, especially with his most recent collection — a feat that landed him the prestigious Nancy Mak Award at this year’s Fall/Winter Vancouver Fashion Week, which will allow the young designer to take his collection all the way to Tokyo for Amazon Fashion Week.

Edmonton native Amy Herndon, Creative Director of Ization Studio, doesn’t mess around when it comes to jamming meaning into her streetwear-ready collections.

Herndon’s design aesthetic is experimental — meaning it wouldn’t be out of the ordinary to find her combining traditional silhouettes like pleated trousers with graphic tees and baggy puffer jackets.

Her latest collection, [Popularity Contest], is a reflection on the feeling of being alienated, with bold colour palettes and billowing patterns meant to symbolize the need to feel protected. Along with embroidered “We Don’t Clique” tees and huggable puffer jackets, the collection features circular graphics which signify “the metaphorical bubble that so many people live in to avoid confronting the outside world,” says the up-and-coming designer.

Unlike typical runway wear, all of Ization Studio’s garments are designed to be unisex, and the studio actively promotes diversity and inclusivity in both their runway shows and on social.

Perhaps it’s our Canadian shining through, but we think that’s definitely worth a follow.

As a first-generation immigrant to Vancouver, Alex S. Yu credits the multiculturalism of the city as one of his biggest design influences: “The diversity of the city helped to broaden my vision, and opened up my mind,” says the young Canadian designer.

His latest collection, The Tenth Synchronicity, is an ode to both the youthful silhouettes of the sixties (think mini skirts, shift dresses, and mod-style shirtings) and the Japanese idols of the 90s and 2000s (we’re talking colourful prints, baby doll silhouettes, and major ruffles).

As a designer who loves playing off traditional femininity and good vibes, Yu is all about keeping his pieces hyper-local and preserving the craft of his atelier roots. “My label is designed in Vancouver in small batches and every piece is handmade,” says Yu.

But don’t be fooled into thinking that means this fashion label will blend in with the rest of your everyday wardrobe. “My designs are meant to be worn for people to stand out in a crowd,” says Yu. With custom graphics and cheeky couture silhouettes, we can definitely see why this Canadian designer has amassed such a crazy cult following on Instagram.

You won’t find Peter Zuk’s designs on a local fashionista or trendy tween — and that’s entirely the point.

His runway collections, especially his most recent collection, OVERDOSE, hit you smack in the face with pure nightclub energy and his designs are specifically made for entertainers: “I took it upon myself to create a runway that was filled with smiling queens, non-binary folk who could vogue the runway down, and cuddly bears who were more than happy to be in the spotlight,” says Zuk.

A native of Fort McMurray, Alberta, the Vancouver transplant continues to dress LGBT royalty and keeps his brand focused on creating fun and BS-free fashions that people are excited to see strut down the runway.

“For the longest time I had always wanted to prove to people that I was very mature for my age, but then I had a light-bulb moment and decided that I wasn’t (at all, like, not even close). So not only do I want to shove my youth down my audiences’ throat… I wanted them to swallow it.”

Grandy Chu, lead designer of GRANDI, isn’t here for designers who craft pieces just to follow a cute aesthetic. “There has to be more,” says Chu. “Consumers are smart and they can sense depth, story, and cohesion.”

That motto definitely reigns true given her latest collection, Essential Colours, a line of women’s party attire inspired by a simple pack of crayons. “Crayons are so simple and accessible, yet in different hands, they can tell wildly different stories,” says Chu.

Give her a follow for bold women’s fashion and standout special occasion pieces. If you’re lucky, you’ll get to see some flashy party hat inspo, too.