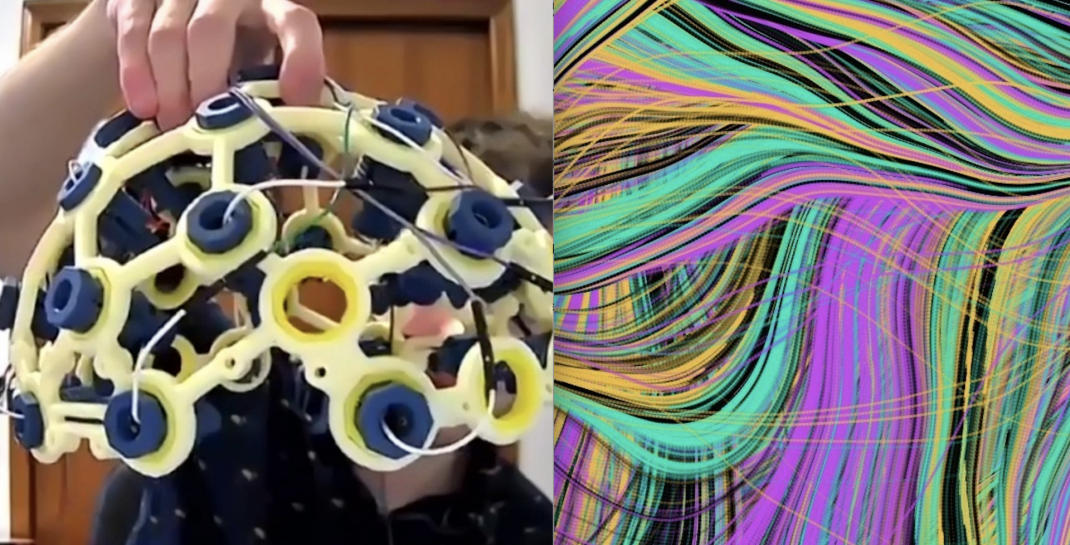 A team of students from the University of Alberta has developed a program that turns its wearer’s thoughts into pieces of abstract art.

Called RemBRAINdt, the program uses a 3D-printed headset and electroencephalography (EEG) to record a user’s brain activity through their skull, explained Eden Redman, the president of NeurAlbertaTech and team lead on the project.

After a baseline reading, the wearer is then shown various words and images that are intended to illicit an emotional response.

A graph is created from that heightened brain activity which RemBRAINdt, using machine learning, is able to translate into abstract art.

Rather than simply reading happiness as yellow or anger as red, though, the device measures emotions and feelings on a gradience, Redman said, ranging between “valance” and “arousal.”

Valance records positive or negative feelings, and arousal measures how calming or exciting something is.

The result is beautifully swirled lines of colour, each piece giving a new look into someone’s mind.

Redman, 24, is currently studying Industrial Design and East Asian Language Studies as an “after-degree,” but has a background in psychology and computational neuroscience.

He first came up with the idea for RemBRAINdt in January 2020 as a way to support a fundraiser at the University of Alberta’s Neuroscience and Mental Health Institute.

Although the project was temporarily stalled when COVID-19 hit, the NeurAlbertaTech team picked it back up, remotely, in the summer.

Since then, RemBRAINdt has eared them some “pretty decent funding,” Redman said, including $20,000 from NeuroNexus 2020, a neurotechnology design competition in Alberta.

It’s also been incorporated as an official business under the name RemBraindt Neurotechnologies Inc.

Post-pandemic, Redman’s long term goal remains having the device at public and private events. Short-term it’s “nose to the grindstone,” as the team continues to improve RemBraindt.