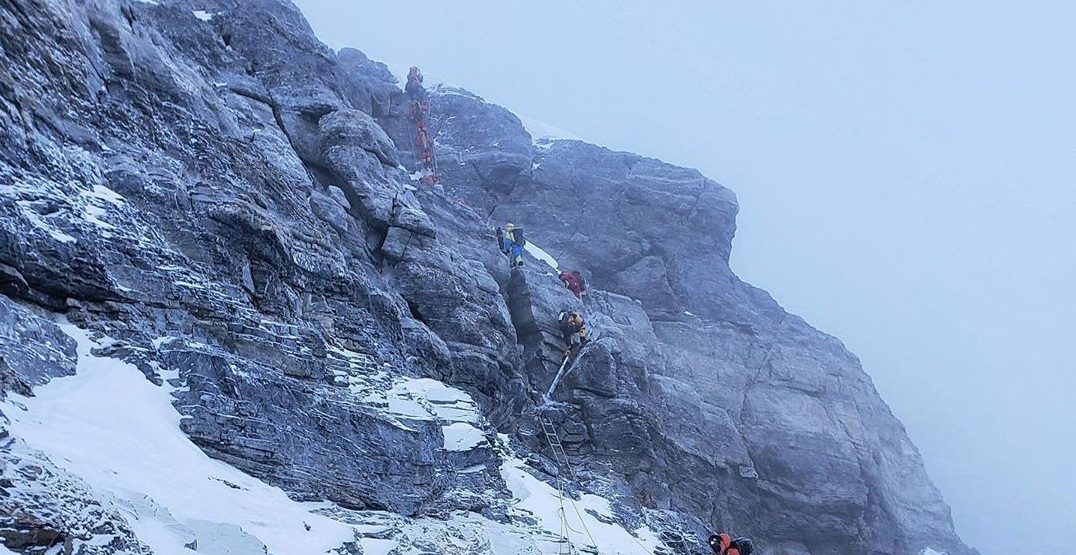 Calling it the most “most dangerous and terrifying movement,” he’s ever experienced, a BC man has recounted his push from the last camp to the summit of the world’s tallest mountain, Mount Everest, this past week.

Chris Dare is a Victoria BC resident, who was a participant this year in the Summits of Hope expedition, which sought to raise money for BC Children’s Hospital.

He has spent the last six weeks “eating, sleeping, and living with the 360 expedition team,” which consisted of five clients, and one expedition leader/guide.

“They accepted me into their family as one of there own and we did everything together up to our ascent to Camp 1 (7100 m),” he wrote on Facebook.

From Camp 1 to the summit, Dare and his personal Sherpa guide Nurua “would be responsible for our logistics including oxygen, fuel, tent, etc,” he continued. “We would still stick closely by with 360 as we had developed a strong bond with the team, and would help each other out as best we could as we pushed further up the mountain.”

He then recounted his overall experience of the expedition, particularly his final push from Camp 3 to the summit.

Recalling his push to the summit, Dare said an “extremely small window” of  time and favourable weather had forced him, along with numerous other climbers on the Tibet side of the mountain, to try for the top all on the same day.

Dare and his crew opted to leave Camp 3 two hours earlier than the typical start time of between 6 am and 9 am, thinking they would “beat the rush” of other climbers.

However, this gamble turned out not to work in their favour, as other teams had “left six or seven hours early” for the summit, as well.

“This meant long lines ups at the three vertical single-file climbs – also known as the three steps on the North Side. There is only one step on South side: the Hillary Step,” he recalled.

The unexpected waits “added hours” both on the ascent and descent. This waiting period was made even more dangerous, as the weather window was closing that day and winds of 60km+ and temperatures of -50°C added to the threat.

“The ascent from Camp 3 to summit was the most dangerous and terrifying movement I have ever experienced,” he said. “The north side is extremely exposed to the elements with much of the route consisting of a ledge 20 cm-wide with sheer drops of hundreds of meters down.”

While there is a fixed rope here, Dare said that all this means is that “you’re standing on a balance beam and if you fall, you drop about 20 meters before the rope catches then you slam your body/head against the rock below the ledge.”

There is “no room for mistakes,” he added, noting that at least two had died that night falling, despite the rope.

Dare said that generally, the time estimate for Camp 3 to the summit is six to nine hours.

Dare made it to the summit, where he stayed for just a mere 10 minutes, as the winds were starting to pick up. The quick turnaround also meant “sacrificing the ‘perfect summit photo”‘for safety.”

Despite their hastiness, “it was already too late though, and we were getting hammered by the winds and cold all the way down.”

In total, it took Dare and Nuru 17.5 hours to make the trip from Camp 3 to the summit, and back to Camp 3 again.

“The original plan was to descend as far down as possible (hopefully to advanced base camp) from the summit, but I was too exhausted to continue,” Dare recalled. “I truly believe I was in danger of dying up there.”

However, Dare said it was through Nuru’s encouragement, thoughts of friends and family back home, and repeating the words ‘I’m not dying here today,’ that he said he was able to make it back to Camp 3.

The climber said he was “incredibly floored by the amount of support you’ve all given to Summits of Hope and the BC Children’s Hospital while I made my summit push.”

Despite his safe return, “we still lost one of our beloved members of the 360 expedition team that day. However, it could have been a lot worse,” he said. “This is just my account and I’m not here to argue with armchair analysts about what should have been done and why things went wrong.

He added that there were some “very difficult decisions and actions” people had to make under extremely difficult circumstances.

“Despite all our technology, support, and modern gear, it’s the mountain that’s still in charge,” he said.