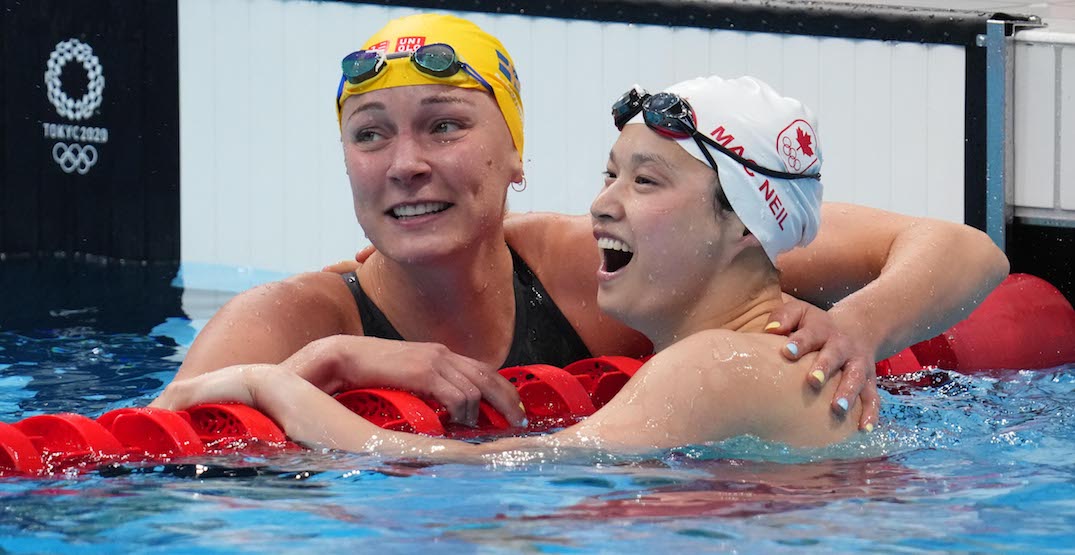 Racing in the 100m butterfly final, the London, Ontario-based swimmer had a strong second half of the race with a time of 55.59 seconds to push through for a remarkable gold medal win.

The full race video is here:

Finishing sixth in the semifinal, the Canadian won the race out of Lane 7. She was, coincidentally, in seventh place at the turn.

An animation from the New York Times shows just how remarkable the comeback was:

It is Mac Neil’s second Olympic medal in just under 24 hours, as she was part of Canada’s 4x100m freestyle relay team that won Canada’s first medal of the Games.

Mac Neil didn’t even realize she’d won the gold initially, only noticing that she was atop the leaderboard about seconds after the event concluded.

A golden reaction for a golden moment

“Oh my God,” she exclaimed.

“I heard my name called, so I thought I did something well,” Mac Neil told CBC after the race. “Then I turned around, and was kind of scanning the scoreboard… I don’t think it’ll process for a little while.”

Canada’s newest medalist, who has competed in the past for the University of Michigan, also won the 100 m gold medal at the 2019 World Championships, taking place in Gwangju, South Korea.

“It means the world to have your support,” Mac Neil said about the fans watching back home.