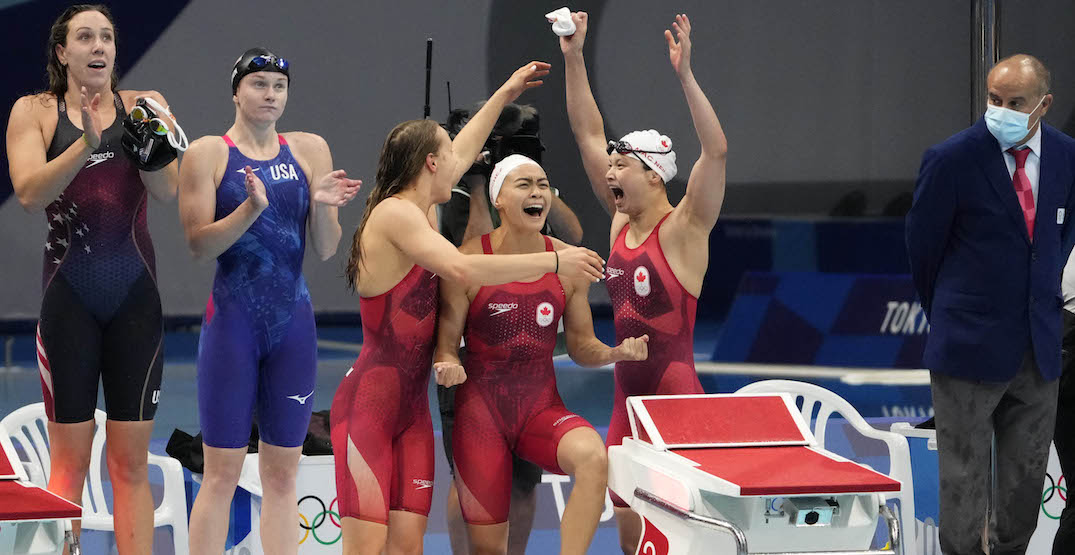 Canada has won its first medals of the Tokyo 2020 Olympics.

The women’s 4×100-metre freestyle relay team — comprised of Margaret Mac Neil, Penny Oleksiak, Kayla Sanchez, and Rebecca Smith — swam their way to a silver medal on Sunday. The Canadian women finished the race with a time of three minutes and 32.78 seconds, narrowly beating out USA by 0.03 seconds.

Canada has their first medal of #Tokyo2020 🚨 The relay women do it again.

Canada sat in fourth place prior to the final leg of the race, with Oleksiak pulling her team into the silver medal position.

“I just knew I wasn’t going to touch third. That was the only thing [going through my mind],” Oleksiak told CBC after the race. “I wanted a silver medal for these girls and I wanted it so bad. I wouldn’t accept anything else.”

Oleksiak now has five Olympic medals in her career, after picking up four at Rio 2016. MacNeil, Smith, and Sanchez are first-time Olympic medal winners.

“It’s a lot of pressure and I could choose to let it affect me or I could choose to step up and do what I needed to do for these girls,” said Sanchez, who started off the race for Canada. “It’s a really emotional moment. I really can’t believe it.”

Diving duo Jennifer Abel and Mélissa Citrini-Beaulieu also picked up silver medals on Sunday, placing second in the women’s 3m synchronized springboard. This is the second Olympic medal for Abel, who won bronze nine years ago in London in the same event.