Wine and food are two things that Canada does gloriously well, particularly in British Columbia. In what is an ideal partnership, the Naramata Bench Wineries Association has teamed up with the EAT! Vancouver Food + Cooking Festival for a food and wine event focused on the best tastes of the nation for an evening called The Canadian Flavours Gala.

For their annual Vancouver Spring Wine Release, Naramata will hold their fundraiser tasting event as joint celebration with some of the best in Canadian cuisine gathered for EAT! Vancouver, with chefs from B.C. and other provinces serving dishes to complement the Naramata wines. Partial event proceeds and all proceeds from the event’s companion auction will go to Vancouver Aquarium Ocean Wise™ programs.

The wineries will be joined by an impressive roster of culinarians from across the country, including Vancouver’s Ned Bell; Tofino’s Nick Nutting; Calgary’s Connie DeSousa and Andrew Winfield; Toronto’s Jesse Grasso; and several chefs from the wineries’ restaurants. They, and many others, will be serving up food that reflects the season and the unique flavours of Canada.

When the focus is the flavours of Canada, the question arises: How do we define Canadian food?

“Of course the definition of what is Canadian food is an often-debated one,” says participating chef Ned Bell (YEW seafood + bar). “Depending on whether you live in Canada, where you live in Canada regionally, how old you are, your parents and where they might be from…[it] means different things to different people.”

For Bell, who was raised in the Okanagan in B.C., Canadian food is about the partnership between ingredients and the act of gathering to eat. The ingredients begin at the farm or in our waters, and are translated with the techniques and flavours guided by culture. Bell cites his own English, Scottish, and German heritage as shaping the flavours he grew up with, punctuated by the global influences found in Vancouver, particularly those from Asian countries.

“The multiculturalism that exists in the food in Canada is what excites me the most,” says Chef Jesse Grasso of Toronto’s Black Hoof. Connie DeSousa of Calgary’s Charcut Roast House agrees. “Canada has the best ingredients in the world and a huge diversity of culture and culinary offerings from coast to coast.”

DeSousa notes that Canadian chefs’ conscious decisions to play on the strength of culinary diversity, as well as take part in large-scale world class food events, the country is gaining respect, particularly for our humble nature and collaborative spirit which people gravitate to and sets us apart on the international stage.” 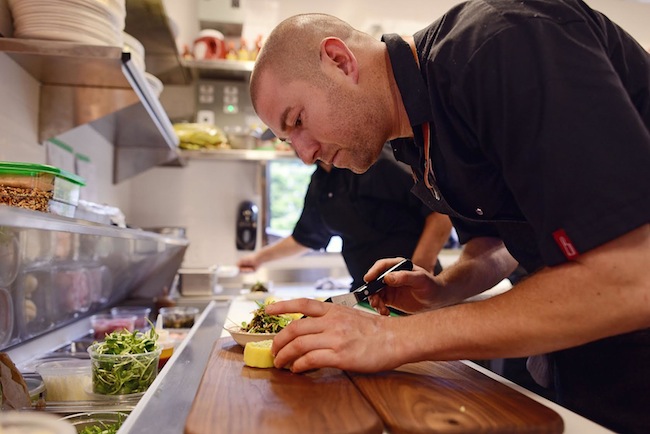 There’s been a great deal of respect bestowed upon Wolf in the Fog, located almost as far west as one can go in Canada, in Tofino on Vancouver Island. In its first few months the casually sophisticated restaurant has garnered national attention, landing atop the enRoute Magazine list of Best New Restaurants of 2014, and helping make Tofino a destination for food-focused travellers.

When Wolf in the Fog chef Nick Nutting talks about how his restaurant reflects its locale, he seems to be describing in parallel the food of Canada reflects its own land and the people: Young, diverse, laid-back, quality-focused, and blessed by nature.

“The food we do [at Wolf in the Fog] is food you want to share with your friends,” explains Nutting. “We’re in a pretty unique place in the world, in the forest and on the ocean. There’s surfing here, and a young upbeat vibe–it’s not pretentious. We wanted to capture the overall vibe of Tofino, and use really good cooking technique.”

Because the Canadian terrain is so varied, so many chefs, restaurants, and winemakers succeed by emphasizing the merits of their region in their end product. This happens in Calgary, according to Andrew Winfield of River Café. “We try and raise awareness of Alberta indigenous ingredients and our heritage of grains and the cattle industry,” says the chef of Calgary’s role on the Canadian food landscape. 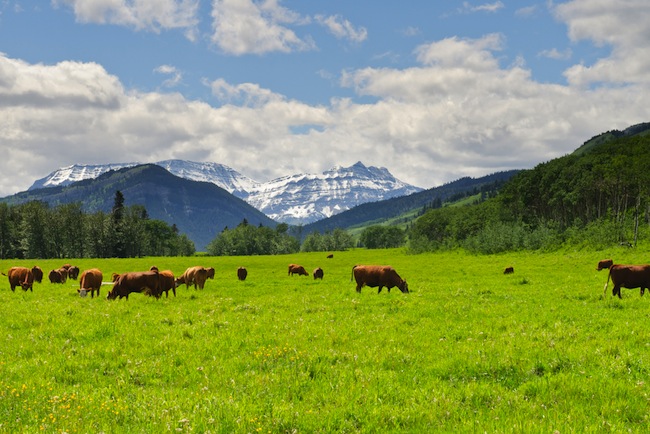 River Café has risen in prominence on the Canadian gastronomical scene thanks to its focus on culling ingredients steps from the kitchen, and have been perfecting their local, seasonal approach for over two decades along the Bow River. The flavours of the region end up on the plate; terroir is to food as it is to wine.

Winemaker Kathy Malone of Hillside Winery in the Naramata Bench says their terroir has had a profound impact on the end result in the bottle and glass. “We have probably the most unique growing conditions in the world in B.C.,” explains Malone. Though the regional climate is considered cold, summers heat up to around 40 degrees Celsius, matching the climate of other wine regions like Napa, California, or Australia. Malone says at Hillside they’ve had to adapt their growing and winemaking to the unique climate, and the result is wines that are rich in complexity. 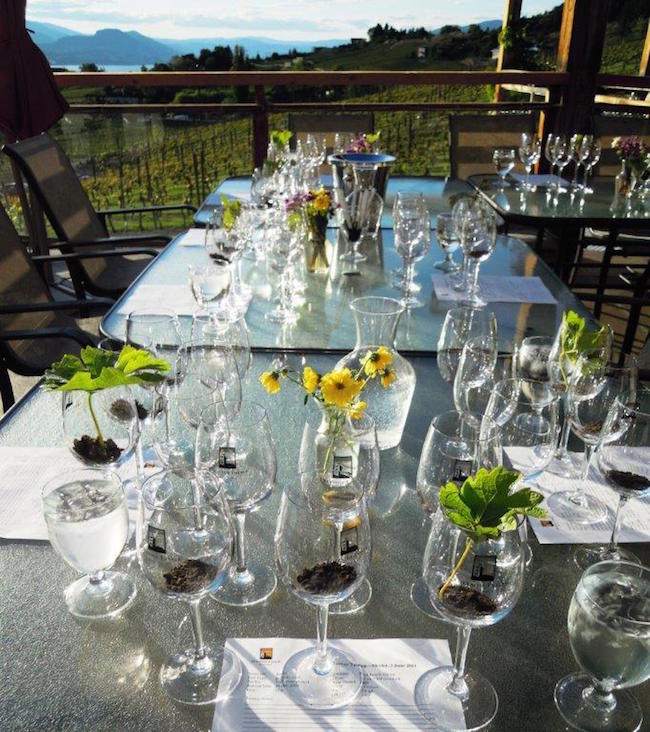 Trying to pinpoint just how the soil’s flavours are expressed in the wines they produce at Hillside, and elsewhere in the Naramata Bench, has been an ongoing endeavour for Malone, and led the winery to produce a single-vineyard Merlot so that customers could do their own taste-testing and comparing.

This new era of complexity in the wines of the Okanagan has proven inspiring to chefs in the region, including Hillside’s own Bistro chef, Rob Cordonier, who says he’s been making a “Brussels Kraut” by fermenting locally-grown Brussels sprouts, and using pine needles from his own yard to make a vinegar, among other region-specific culinary adaptations of local–and thereby, Canadian–product.

“One of our biggest focuses in the Bistro is trying to offer the taste of where we are,” points out Cordonier. “We want [diners] to be able to taste Naramata, B.C., and the food products made here.”

And from far and wide, mountains to shores, Canada is indeed a nation to savor.

“Canadian food is creative and limitless–there are not a lot of boundaries in terms of what you can and can’t do,” reflects Nutting on a spring morning in Tofino. “We don’t have a 2,000-year-old tradition of ‘Canadian cooking’ we’re following–we’re defining it every day.” 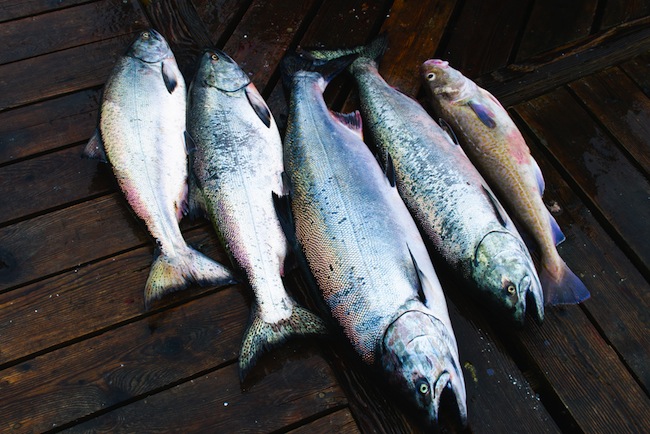 We asked some of the chefs participating in the Canadian Flavours Gala to share with us their favourite Canadian ingredients.

Connie DeSousa (Charcut Roast House, Calgary)
“Alberta Grass-fed beef, heritage pork, west coast seafood, Okanagan orchard produce, Quebec cheeses, grains from the prairies, I could go on and on. We have so many Canadian ingredients that we love to work with and are continuing to explore.  I recently went foraging wild ingredients in Newfoundland when visiting friends.”

Jesse Grasso (Black Hoof, Toronto)
I think Quebec produces the best maple syrup in the world, and love using it anywhere I can. I’ve also been super into whelks lately.

Andrew Winfield (River Café, Calgary)
“Maple Syrup is an obvious, but lesser known Birch syrup is a unique flavour. Saskatoons and Honeyberries are great ingredients people can find in their own back yard, but some personal favourites are ingredients like wild sea asparagus, Saskatchewan chanterelles, raw coastal oysters, naturally raised bison, and Canadian grains and legumes.”

Nick Nutting (Wolf in the Fog, Tofino)
“The fish in our area is spectacular. I’m hugely fond of the wild mushrooms that grown in the rainforest–foraging for mushrooms is a hobby of mine, and it’s such a beautiful part of cuisine when you can go into the woods and pick the mushrooms and berries out there and use them in your cooking. So for me: Mushrooms and fish.”