Earlier this month, the federal government announced it plans to introduce a series of sweeping reforms to the Citizenship Act that are designed to reduce processing times, tighten residency requirements and crack down on fraud – measures that will make it tougher for many to become Canadian.

Chris Alexander, the Minister of Citizenship and Immigration, commented that the changes are intended to strengthen the values of Canadian citizenship to avoid it being simply a “passport of convenience.”

“Citizenship is a pledge of mutual responsibility,” he stated, “and a shared commitment to values rooted in our history.”

Under the new legislation – Bill C-24, Strengthening Canadian Citizenship Act, which is the first major revamp of the Citizenship Act in our generation since the 1970s – permanent residents will have to have a physical presence in Canada for four out of six years, compared to the current three out of four years.

The bill will also triple application fees, and expand the age range for those required to demonstrate language proficiency and pass a knowledge test, from the current 18 – 54 to those aged 14 – 64.

The processing system will also become a one-stop process rather than a three-step assessment process, with citizenship officers making the decisions in most cases rather than citizenship judges. There are currently about 320,000 citizenship applications waiting to be processed with wait times ranging from 24 to 32 months, according to immigration officials.

When the proposed changes take effect in the coming months, they are expected to cut the waiting list 80 per cent by 2016. Processing times for new applications will be reduced to less than one year under the amendments.

And it includes changes will allow citizenship to be revoked from dual nationals who are convicted of terrorism, high treason and spying offences, or those who take up arms against Canada. Permanent residents who commit these acts will also be barred from applying for citizenship, with fines soaring to $100,000 from $1,000, or up to five years in prison in the case of citizenship fraud.

Critics argue that the amendments are a form of punishment, which should fall under the remit of the criminal justice system, with Andrew Griffith, former director general of Citizenship and Multiculturalism at Citizenship and Immigration, succinctly summing it up on thestar.com, saying; “This package of measures essentially makes citizenship harder to get, but easier to lose.”

The issue of so-called “birth tourism” – where a foreign national comes to Canada to give birth so the baby can get Canadian citizenship – is said to be in the consultation stages with the various provinces who have jurisdiction over hospitals. Currently, Canada and the U.S. represent the only developed countries to grant automatic citizenship to babies born on their soil.

Online reaction to the news varies from support, to deter the incidence of “anchor babies,” to advising immigrants to follow the rules or go home. Others reason that Canada’s foundation has been built on its rich immigrant history, with most permanent residents contributing to the very fabric of society.

Ruairi Spillane, founder of Moving2Canada.com – an information website and recruitment agency aimed at helping newcomers become successful in Canada – says that it’s understandable that people feel frustrated by increased levels of bureaucracy, but that we must not lose sight of the bigger picture.

“Over the past few years, Canada has been making it easier for skilled workers to gain residency and eventually integrate fully as a Canadian citizen,” he said.

“Complying with immigration laws is a necessary hoop that we need to jump through, so it’s much easier to play within the system than to fight it. We must remember that Canada ranks third in the world in terms of an open immigration system (behind Australia and New Zealand), and continues to open its doors for skilled immigrants to come to Canada and contribute to the economy. We can’t forget how lucky we are to live in such a diverse country.”

Spillane stated that the changes appear to be well intentioned, motivated by a need to prevent abuse of the system and speed up the current process.

“While these changes will attract criticism for raising the bar too high,” he added, “the current processing time for an application is two years, so it’s very positive that they plan to dramatically reduce this delay to just one year.”

“Western Canada’s labour shortage is expected to peak in 2015, so the renewed focus on attracting young workers with competency in either English or French can only be a good thing for Canada’s growing economy.” 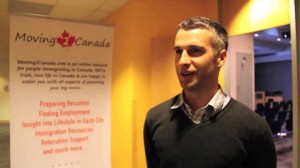 From a personal standpoint, Spillane, who moved to Vancouver in early 2008 and recently applied for citizenship, said that he’s excited at the prospect of gaining citizenship. “I count myself very lucky to have the opportunity to live in this country,” he said, “and it’s my privilege to legitimately spread the word to people worldwide about everything that Canada has to offer.”

Join the free Moving2Canada network for immigration news and information.